Engagement, Inside Info Behind Successful Opening for Small-Budget Film
READ THIS NEXT
How restaurant chains are duking it out to be the best in their categories
Kirk Cameron stars in 'Fireproof.'
Credit:

LOS ANGELES (AdAge.com) -- Box office watchers keeping an eye on this past weekend's grosses might have been surprised by one of the films to make the top-five list, but to some on the outskirts of Hollywood, the results might not seem so miraculous. 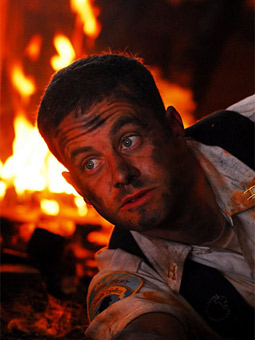 Kirk Cameron stars in 'Fireproof.'
While the heavily promoted new releases "Eagle Eye," "Nights in Rodanthe" and "Lakeview Terrace" were expected to draw in audiences over the weekend, taking the top three spots, respectively, "Fireproof," a movie made for less than $500,000 and showing on some 830 screens, took in $6.5 million over the weekend. (By comparison, "Lakeview Terrace," the No. 3 movie, earned $6.9 million on 2,467 screens.)

Faith can move audiences
The unlikely success of a small independent film about a firefighter seeking to save his marriage through a self-help book can be attributed not to a major Hollywood-type marketing machine but to a targeted effort aimed at an audience most studios still have trouble reaching: evangelical Christians. And the marketing savvy is even more apparent when the film itself could be viewed as a vehicle to promote an actual self-help book, "The Love Dare," which was released to coincide with the movie and reached No. 12 on Amazon's best-seller list.

The book and the movie were written by Alex and Stephen Kendrick (Alex Kendrick, a Georgia-based pastor, directed the motion picture), and while most of Hollywood is slack-jawed, one woman is not.

"I used to be an Army officer, and we run this like a war," said Kris Fuhr, a former captain in the U.S. Army's military intelligence section and now VP of Provident Films.

"You've got troops on the ground, and you've got air support," she said of the marketing campaign she fashioned. "You need both to establish a relationship with thousands of people before the movie opens."

The air support was advertising on Christian radio stations. Her troops on the ground were the scores of fans of Provident's last release, the 2006 film "Facing the Giants" (also directed by Mr. Kendrick), who were required by the company to rally at least 1,000 fans to commit to seeing "Fireproof" if they wanted a print of the new film delivered to their town. In the end, 98 of the 839 screens on which "Fireproof" was shown had already sold 1,000 tickets before the film even opened.

Staying in touch
"We have done a great job of maintaining a relationship with our consumers," she said. "One of the things we know is to meet the consumer at the point of demand, that it's easier to meet a 'pull' than a 'push.'"

The key to exciting those evangelicals, Ms. Fuhr said, is keeping them engaged along the way with inside information and access. Hard-won grass-roots consumer information gleaned from the successful release of "Giants" didn't molder. "We're on these people's Christmas card lists," she explained, "So we engaged them. We maintained contact, and gave them inside information on the production. We ask them to pray about the movie. When there were things going on on-set, we told them about it."

Such an approach couldn't be less Hollywood, where scripts and casting information are kept under tight wraps, and Christmas cards are signed by assistants for their bosses to their wives, and certainly never to audiences.

After 2005's megahit "The Passion of the Christ," many studios rushed to create specialized Christian fare, if not actual divisions, like 20th Century Fox's Fox Faith, which reportedly promised a dozen theatrically released Christian-friendly films. Hollywood marveled at the idea of finally marshaling vast studio resources to reach a vast, untapped market -- but most have proven lackluster performers.

By comparison, record companies have enjoyed doing brisk business with evangelicals: Christian/Gospel recorded music sales amount to more than half a billion dollars annually, and last year, Christian/Gospel album sales represented 6.6% of all album sales -- a total higher than Latin (6.4%), classical (3.3%) and jazz (2.8%), according to the Christian Music Trade Association and Nielsen SoundScan. More, Christian/Gospel digital album sales were up more than 66% in 2007, and digital tracks up 36%.

Unsurprisingly, then, Provident is the outgrowth of Sony BMG's Christian music label and not the appendage of a major Hollywood film studio.

Skeptical consumers
"It's not that you have to dynamite them out of their homes," said Meyer Gottlieb, president of Samuel Goldwyn Films, which distributed "Fireproof" domestically. "But the evangelical audience is very suspicious of traditional marketing approaches. They don't trust you that it's silk; you have to let them feel the fabric."

To that end, Ms. Fuhr was also careful to screen the film for major conservative Christian ministries such as Focus on the Family, FamilyLife and the American Family Association, all of which gave "Fireproof" their imprimatur and entered into cross-promotion arrangements with Provident, directing their memberships toward "Fireproof" -- so long as the studio directed audiences toward their organizations as well.

"We're snipers," explained Ms. Fuhr, using yet another militaristic turn of phrase. "We don't need a shotgun blast of marketing, because we are our own target demographic."