Album Debuts at No. 3 on Billboard Chart
READ THIS NEXT
How restaurant chains are duking it out to be the best in their categories

CHICAGO -- Back in the fab days, Paul McCartney hung with John, George and Ringo. But these days he's just as likely to want to spend quality time with Howard and Ken. 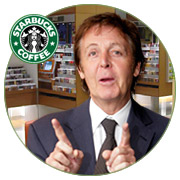 No. 3 debut
The former Beatle has posted his best new-album-sales performance in 10 years with "Memory Almost Full," thanks to a little help from his friends -- Chairman Howard Schultz and Entertainment President Ken Lombard -- at Starbucks. The inaugural release on the coffee giant's new Hear Music label delivered Sir Paul a No. 3 Billboard Top 100 chart debut and about 332,000 records sold to date, according to Nielsen SoundScan. Nearly half, 46%, of those albums were sold at Starbucks.

The album is Mr. McCartney's best showing on the charts since 1997's "Flaming Pie," which made its debut at No. 2 on the Billboard 200.

Global Listening Day
Since its June 5 debut, the album held the third spot in its second week and has fallen to No. 5 on the chart for its third week. It's a respectable return that can be credited, in part, to the Seattle-based chain's all-day Global Listening Event, held in conjunction with the album's release in more than 10,000 of its stores.

"People communicated that Paul missed the sense of event around launching his records and wanted to put that sense of event back into the record launch and give more a feel that labels had in the past," said Geoff Cottrill, VP-marketing, Starbucks Entertainment.

Throughout the day, stores played the album in a loop while baristas talked up the album to customers in stores and at drive-throughs. The marketer also promoted the event with radio, TV and online advertising tags and issued limited-edition Starbucks Card with Mr. McCartney's image.

Whole new world
Moreover, the reciprocal value for the former Beatle is "exposure to a new set of consumers and an entirely new environment," said Mac Brand, associate principal for the Hale Group. Indeed, Mr. McCartney got his own version of the Starbucks experience. Fans lined up at stores in full Beatles regalia and Starbucks captured them on film offering their birthday wishes for the singer, who turned 65 on June 18.

Despite some negative buzz associated with complaints by baristas and consumers alike over the repetitive play, the event got people talking -- and buying. The coffee chain sold more than 23,000 copies on the first day, Mr.Cottrill said. That topped the marketer's previous one-day record set by "Genius Loves Company," by the late Ray Charles.

"From a single-day standpoint and single title, it's the biggest day we we've ever had," said Mr. Cottrill, adding that sales across all areas of the stores were up significantly, including from "a lot" of new customers who were fans of Mr. McCartney and the Fab Four.

Grammy nods?
With 161,000 albums sold in the first week, "Memory Almost Full" pales against the monster No. 1 debut for Bon Jovi's "Lost Highway," which sold 291,000 albums in its opening week. But then again, "Genius Loves Company" sold 5.5 million copies and earned eight Grammy Awards. Those are milestones any artist, new or established, would want.

"Genius" and "Memory" are "very different records so it's hard to do apples-to-apples comparisons," said a Starbucks spokeswoman. "We think it has great potential, and we're hopeful for Grammy nominations as well.

Kate Macarthur
View all articles by this author