Jason Bateman, Will Arnett Discuss Creating 'Dirty Shorts' for Wrigley's Orbit Gum
READ THIS NEXT
How restaurant chains are duking it out to be the best in their categories

LOS ANGELES (AdAge.com) -- Electus today unveiled the first web short from DumbDumb, a new production company from "Arrested Development" alums Jason Bateman and Will Arnett. The "Dirty Shorts" are a series of sketches created for and sponsored by Wrigley's Orbit gum. 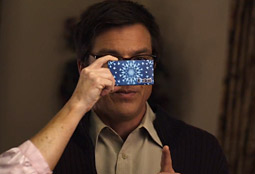 Will Arnett and Jason Bateman created, directed, executive produced and star in the first of a series of sketches created for and sponsored by Wrigley's Orbit gum.
Electus is the brainchild of Ben Silverman, the former co-chairman of NBC Entertainment who was also the founder of production company Reveille. Since launching last fall, Electus, which counts as a partner Barry Diller's InterActiveCorp, has snagged a high-profile distribution deal with Yahoo, tapped Starcom Entertainment's Laura Carracioli-Davis to run ad sales and announced its first international slate at MIPTV in April. Earlier this week, the company announced a new production company, SoBe Studios, in conjunction with PepsiCo and CollegeHumor.

Messrs. Arnett and Bateman created, directed, executive produced and star in the first short. The popular actors, who are recognizable from TV and movie work, are no strangers to the web. Mr. Arnett has appeared in a handful of popular viral videos, including one for MTV's "Human Giant" that leaked on FunnyOrDie.com and a short for fellow "Arrested Development" alum David Cross' Channel 4 series in the U.K. Having A-list names attached to sponsored web content is the latest milestone for a medium that has recently seen Lisa Kudrow (Lexus' "Web Therapy"), Marisa Tomei (Bertolli's "Into the Heart of Italy") and Ashton Kutcher (Cheetos' "KatalystHQ") star in and develop original content for brands.

Not an ad agency
The first short premiered at an Internet Week launch party for DumbDumb in New York, and on a new YouTube channel this evening. Orbit will also host the shorts on its official brand site, and distribute it through IAC digital properties such as CollegeHumor. Just don't call DumbDumb an ad agency. Mr. Bateman said he approaches making web shorts for sponsors the same way a theater troupe approaches improv comedy.

"If you go to an improv show, they ask the audience for a topic and they might throw out 'lipstick' as an arbitrary word," Mr. Bateman told Ad Age. "You wouldn't care that it was about lipstick, you wouldn't need it to be about lipstick as an audience member. So we go to these brands and say, 'What's your slogan? What are you launching in fourth quarter?'"

In the case of Wrigley's Orbit, that meant cleaning up dirty moments to leave gum chewers with a "clean feeling, no matter what." Having previously partnered with celebs such as Snoop Dogg and the cast of "Jackass" -- not to mention its integrated sponsorship of this past weekend's expletive-laden MTV Movie Awards -- Orbit wanted to continue to push the comedic boundaries of branded entertainment. That's what attracted Mr. Arnett to the first sketch, out today, in which he stars with Mr. Bateman, Aubrey Plaza ("Parks and Recreation") and Rachel Harris ("The Hangover").

"I wanted to be able to play a teacher who's going on a prom date with one of his students," said Mr. Arnett, who refers to said date as "newly legal" and at one point in the video uses a piece of Orbit gum to warm up his "kiss hole." "Under the normal guidelines that would not be something that's acceptable. But since we're using one of the brand's attributes, we're making that dirty situation clean."

Paul Chibe, Wrigley's VP-general manager, U.S. gum and mints, said he doesn't mind supporting edgy humor as long as it's within the interests of the brand's demo.

For Mr. Silverman, whose skill as a content developer while at Reveille also included cutting deals with brands to appear in his shows, DumbDumb represents one of the fastest projects to go from announcement to deployment, having only unveiled plans for the company in January at the Consumer Electronics Show in Las Vegas.

"What Jason and Will understood early on is that we're working with brands who have certain attributes, and they've been really respectful of that. But they've also introduced this business model to introduce A-list storytelling online."

"We're really looking to align distributors as our partners as we build audience. We want to create a hybrid model where we're the creative shop, the production company and the entertainment company."

Both Mr. Bateman and Mr. Arnett cite "30 Rock" as the best case of how to call out product placement among sophisticated comedy audiences. But Mr. Arnett cited an integration from "Arrested Development," in which "Happy Days" icon Henry Winkler jumped over a dead shark in the midst of a blatant product placement for Burger King, as the ultimate model of how it can work successfully.

"We had Henry Winkler, the guy who invented 'jump the shark,' literally jump the shark while he was potentially jumping the shark all over again. Nobody does it better than ['Arrested Development' creator] Mitch Hurwitz."