Madison & Vine, Ad Age's original cross-section of the New York ad community and Hollywood, will be taking a broad look over the next year at the key players, projects and platforms in the digital branded-entertainment arena. Check in with M&V as we keep tabs on established players; check in with the media agencies and marketing firms that continue to staff up their branded-content divisions; or profile the newest studios and media companies entering the space. 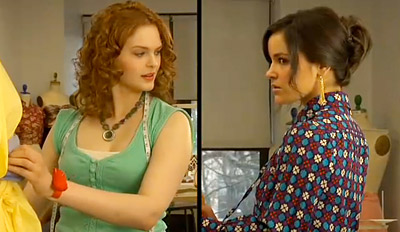 The Background: For more than a decade, few media companies have shaped the way tweens and teens consume franchise properties quite like Alloy Media. Since the 2005 release of Alloy Entertainment's movie adaptation of Alloy's hit young-adult novel series "Sisterhood of the Traveling Pants" and the 2007 premiere of "Gossip Girl," based on the books by Cecil von Ziegesar, the company has accomplished a cross-platform pop-cultural relevance other publishing houses could only dream of achieving.

Next Steps: Whether fans tune in to the televised versions of their favorite books on TV, discover the books by following the TV series or films, talk about characters and storylines on Alloy's network of websites (ranked No. 1 among teens in June by ComScore, with 16.8 million unique visitors) or tune in to in-school network Channel One in more than 8,000 schools nationwide, Alloy has quietly become the new arbiter for teen-entertainment trends. It's a distinction recently noticed by ZelnickMedia and Chairman Gerry Laybourne (founder of Nickelodeon and Oxygen), which acquired Alloy in June for $126.5 million.

Now Alloy is turning to the web as its latest development vehicle, bringing brands along for the ride. In 2009 it launched "Private," a web series sponsored by Johnson & Johnson based on an Alloy's private-school mystery novels, and "Haute & Bothered," an original scripted series sponsored by LG Mobile. This week, Alloy debuts "First Day," its first wholly original series for the web and a branded-entertainment vehicle for Kmart, which will use the program to promote three of its back-to-school product lines: Bongo, Rebecca Bon Bon and Dream Out Loud (the latter from Disney Channel star Selena Gomez).

"We wondered, 'How could we showcase three different clothing lines?' A girl living the same day over and over again in different ways seemed like the best way to do that," Mr. Bank said.

Although Kmart and its products are never addressed by name in "First Day," each episode will be supported by display and video pre-roll video ads highlighting the participating retail lines, with links to Kmart's own micro-sites to purchase the products seen in the series. "First Day" will also receive heavy promotion via click-to-expand video ad units from Alloy properties such as Gurl.com, Alloy.com and Teen.com, and exclusive web partnerships with Meez.com, Candystand and Fanpop among others. Kmart's media agency, MPG, and digital agency, Digitas, helped broker the deal and create the media plan with Alloy. 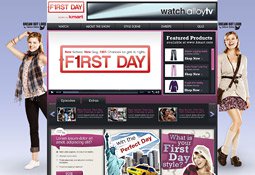 'First Day'
Mark Snyder, Kmart's chief marketing officer, saw a compelling case to be made for the integrated marketing of his retailer's clothes.

"A lot of these kids didn't grow up with Kmart the same way the boomer generation did. It didn't have the fashion credibility Kmart does now, so including it in the storyline felt very relevant to their day to day," he said. "Alloy is an expert on this particular segment and we knew they could deliver the audience we were looking to reach."

And as the teen segment in particular develops more fickle media habits, Mr. Snyder and his marketing team will evaluate the relative value of "First Day" compared to its other media buys later this year. Like Kraft, Procter & Gamble and even Poise incontinence pads have learned before him, original web series can sometimes be tied directly to positive sales results.

"It's hard to say if a 30-second TV spot is more valuable than a 15-minute webisode with incredible integration of product, so we'll have a lot of information to figure out about our targets," he said.

For Alloy, the business model for creating digital entertainment can be break-even if not profitable from the get-go by recruiting brands such as Kmart to underwrite the production costs of the series. But to the viewers, the show has to look as good if not better than a TV series, or they'll have no incentive to tune in.

"We're kind of under the belief that there has to be a variety of ways to deliver a unique experience, so that when you're distributing a show you make sure that views are enabled and interacted with at the highest quality," said Sean Horvath, Alloy Media's exec VP-branded entertainment. "The process is no different than how we would develop something for TV or film, and utilize a lot of the same people we've worked with in the past."