LOS ANGELES -- Does a rising tide lift all Fat Boys?

It's the question that Harley-Davidson has been asking for some years now. A Harley has long been the preferred brand of rebellion for middle-aged white guys, which was just fine, until the country's demographics shifted dramatically toward a younger, Hispanic population. 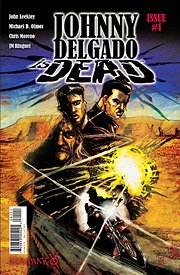 Young and affluent consumers
Latinos are the largest minority in the U.S., and with an estimated population of more than 41 million, they're also the fastest growing, estimated to increase by more than 1.7 million a year, according to the U.S. Census Bureau. Moreover, Latinos are disproportionately younger than whites, and increasingly affluent. The median age for Hispanics is 25.8 years -- that is, a full 10 years younger than the median age for the U.S. as a whole. While a third of Latinos live check-to-check, the number of prosperous Hispanic households -- defined by the U.S. Census as those with incomes of at least $100,000 -- rose 137% between 1990 and 2000.

"It's safe to say that in the last five years, we've more than doubled our reach with minorities," said Scott Beck, director of advertising and sales promotion at Harley-Davidson of North America, before deadpanning: "We've gone from single digits to double digits."

Given the immense growth of the Hispanic population, Mr. Beck wants to do better marketing the quintessentially American iron horse to Latinos.

And now he's using Hollywood to do so. As a corporate client of Creative Artists Agency, Harley has been looking for innovative ways to increase brand awareness and appetite among the current generation of potential Harley owners. After all, by 2020, Hispanic youth will make up 23% of all U.S. youth.

Unveiling at ComicCon
The talent firm has just brokered a deal to prominently feature Harley-Davidson throughout "Johnny del Gado Is Dead," a new comic-book series from the nation's third-largest comic-book concern, Image Comics, via its Top Cow imprint. "Johnny" will be unveiled at this year's ComicCon International in San Diego, the influential nerd prom that showcases the latest in comic books, toys, video games, TV shows and movies to well over 123,000 pop-culture addicts annually.

"We love blurring the line between entertainment and marketing," says Roger Mincheff, president of Space Dog Entertainment, producer of the Top Cow comic. "Lifestyle is defined by the brands in it, so you're actually more credible when a brand is in the story. And Harley is such a lifestyle; it represents a lifestyle beyond the product."

Of course, the chief obstacle facing any brand that hopes to market its wares through entertainment is that the current generation of 18- to 34-year-olds is media-savvy, and the individuals in that demo hate to feel like they're being pitched when trying to chill out. 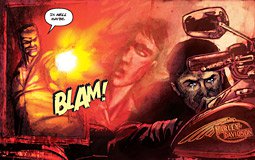 "The under-35 audience that's predisposed to Harley ownership is very difficult to reach," Mr. Beck said, "because they're diverse, elusive and maverick. Authenticity was important. We didn't want it to appear that we were trying to insert commercial product into it. The transaction takes place at the dealership."

(Or as Jack Nicholson's character remarks in 1969's biker classic "Easy Rider": "I mean, it's real hard to be free when you are bought and sold in the marketplace.")

Being more proactive with image
Privately, insiders familiar with Harley's marketing plans point to the "Johnny Delgado" deal as one that represents an important shift in strategy -- from defense to offense. Frequently, Harley appears in movies regardless of whether the company's agenda is being served. In recent films such as Sony's "Ghost Rider" and Walt Disney Co.'s "Wild Hogs," for instance, Harleys abound. But being closely associated with a bunch of hapless, middle-aged white guys -- or worse, a middle-aged white guy wearing a rug -- is like selling prayer books to the choir. Harley sometimes participates in such films only to manage and prevent damage to its brand, not because it believes participating will mean attracting new demographics such as Latinos or women.

Space Dog is making sure that Harley-Davidson's presence in "Johnny" will be subtle. "Johnny" is a crime drama about two Latino pals, one of whom is murdered on the U.S. border with Mexico, and one of whom later seeks justice for his friend's death. The main characters are boyhood friends who grow up together working in a Harley cycle shop. The brand will be a supporting character, but one without any hackneyed lines.

"I don't think that the words 'Harley Davidson' are ever used," Mr. Mincheff said, adding that he's learned lessons from watching both successful and ham-handed efforts by companies that seek to reach out to comic-book hipsters.

There's good reason to go easy on the throttle: After General Motors over-ballyhooed a partnership with D.C. Comics to use its title "Rush City" to promote the new Pontiac Solstice, the comic book sold abysmally. (The car, however, has proved to be a major hit for the automaker.)

Need for credibility
The need for credibility has informed Space Dog's approach to entertainment marketing ever since, which is why it helps that "Johnny" will be written by CAA clients John Leekley -- a motorcycle owner who also won an Emmy for writing and producing the animated TV series "Spawn" -? and by Michael Olmos, the son of Latino actor Edward James Olmos. The duo will also be the force behind TV shows and films contemplated for "Johnny," because, as Mr. Mincheff explained, "no one is in comic-book publishing to make money in comic-book publishing."

There is, however, one person who won't be swayed by Harley's new marketing push: Mr. Mincheff himself.

"My mother brought me to a psychic when I was 14," he admitted, "and she said that I should never get on a motorcycle."