As Partners Flock to Summer Blockbuster, Ad Age Looks at Who's Getting What -- and How Many Brands Are Too Many
READ THIS NEXT
How restaurant chains are duking it out to be the best in their categories

LOS ANGELES (AdAge.com) -- Paramount and Marvel Entertainment's "Iron Man 2" doesn't hit theaters until May 7, but a promotional blitz that kicked off earlier this month has been keeping the summer blockbuster top-of-mind among consumers at virtually every imaginable touchpoint. Blue-chip marketers such as Burger King and Dr Pepper as well as smaller brands like Royal Purple motor oil are attached to a marketing bonanza valued at more than $100 million in media buys, retail tie-ins and giveaways. 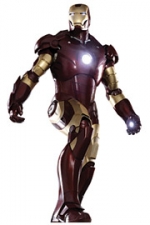 MARKETING MACHINE: Brands want in on what's likely the biggest movie-marketing event of the year.
As with any summer tentpole, is all the promotional fuss worth it for what is sure to be a mammoth box-office hit -- if not what many Hollywood execs believe will be the highest-grossing film of the year -- based on fan excitement alone? The first "Iron Man" in 2008 became a surprise $318.4 million smash, shattering even the most conservative estimates, so the studios aren't exactly hurting for awareness this time around.

And are the brands that are renewing their partnerships this year, such as Burger King, Audi, 7-Eleven and Royal Purple, at risk of getting lost in the clutter? And what are the newer entrants hoping to get out of the association?

Burger King's North America chief marketing officer, Michael Kappitt, told Ad Age he wasn't concerned about the company's role being lost in the marketing mix. "We're pleased to be on the list of top-notch marketing partners," he said.

First-timer Dr Pepper said that theatrical tie-ins tend to have a measurable impact on product sales as well as brand-equity scores and product perception.

"The key here is to get excitement about our brand to all of our partners," Dave Fleming, Dr Pepper's director-brand marketing, said, referring to retailers and bottlers. "And to be able to do a promotional spot where a Dr. Pepper machine is being made in Tony Stark's lab is really one of a kind," he added.

With as many as 11 marketing partners on-board (more than Marvel's other franchise, Sony's "Spider-Man," which averaged eight to nine brand tie-ins), Marvel couldn't have a bigger pilot program for its in-house marketing sales force for its first go-round with brands (Paramount initiated the deals in 2008 but played a less involved role in bringing in sponsors this year).

One executive familiar with the film's marketing told Ad Age that having the familiarity of the "Iron Man" story and Tony Stark franchise gave Marvel more license to team up with brands for like-minded campaigns that spoke to the film's quirkiness. "Tony Stark is this likable fun human character who doesn't take himself overly serious but takes his work very seriously. He has fun doing it but yet the products he creates are the very best of the best," the executive said.

Ad Age checked in with many of the participating sponsors for a look of who's getting what from what will likely be the biggest movie-marketing event of the year.

AUDI
Back for a second ride with "Iron Man," Audi will appear in the film via its R8 Spyder vehicle, Tony Stark's convertible of choice and an enhanced model from the one featured in the first film. Other Audi cars like the A8 sedan, the Q7 TDI sport-utility vehicle, A3 TDI hatchback and Q5 SUV will be seen throughout as well. Audi will support the integration with a monthlong broadcast and cable ad buy, as well as tie-in ads in cinemas and on Fandango.com and Movies.com leading up to the film's release. Since using the first film as a launch vehicle for the R8 sports car, Audi has publicly pointed to the movie tie-in as a direct contributor to the vehicle's success.

BURGER KING
A returning sponsor from 2008 (and a co-star in a key scene in which Robert Downey Jr.'s Tony Stark requests a cheeseburger that happens to come from the home of the Whopper), Burger King is upping its "Iron Man" marketing machinery this time around with a major company-wide push that kicks off April 26. The fast-feeder will feature an "Iron Man 2"-branded sandwich, the "Whiplash Whopper," and eight film-related toys -- four for boys and four for girls. A bevy of TV ads targeted separately toward adults and kids will roll out as well, in addition to a heavy online presence at ClubBk.com.

7-ELEVEN
Another repeat partner, 7-Eleven, is executing several marketing firsts on Marvel's behalf, including its first movie tie-in TV ad to promote its custom "Iron Man" straws, Big Gulp cups and other merchandise, as well as a Live Like a Billionaire Sweepstakes for slurpee.com. The initiative will be supported with radio and web ads as well as a presence on 7-Eleven's in-store TV network. 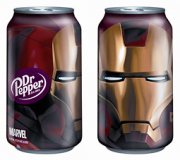 LG ELECTRONICS
Expanding on LG Mobile's role in the first film, LG Electronics is jumping in to tie LG TV's "Something Better" brand-marketing campaign with the movie's sequel message -- "bigger and better." The program will include TV advertising, in-store placement retail circular ads and a retail incentives program, as well as digital and mobile ads starting April 25 and continuing through May. LG Mobile, meanwhile, will give away a limited edition "Iron Man 2" comic book with LG handset purchases at Verizon Wireless stores.

For its first "Iron Man" campaign, Hershey's is using its Reese's brand to engage fans in the Marvel universe, much as it did with Warner Bros. for 2008's "The Dark Knight." The peanut-butter cup is sponsoring a sweepstakes offering fans a chance to win a walk-on role in an upcoming Marvel movie, and is using "Iron Man 2"-branded packaging in the U.S. and over a dozen global territories. The extensive effort will continue through the end of September.

ORACLE
The software company made an iPad-induced splash earlier this month when a series of outdoor and print ads showcased a screenshot of an "Iron Man"-themed Oracle ad as part of The Wall Street Journal's iPad app. The Journal, for its part, does not have a formal relationship with the film, but Oracle will leverage the movie to showcase its recent merger with Sun Microsystems as a partnership with its "Software. Hardware. Complete" tagline.

ROYAL PURPLE
Perhaps the most-specialized marketing partner of the "Iron Man" franchise, Royal Purple is back for round two as the preferred motor oil of Stark Motor Racing. The fictional racing league from the movie this year will have its own real-life racing/street-marketing team making appearances in fully-wrapped co-branded race cars at key events in April and May. Royal Purple products will also be sold with "Iron Man 2" labels in stores, accompanied by custom TV, retail and point-of-sale ads.

SYMANTEC
Symantec, marketer of Norton AntiVirus, will help consumers "eliminate online evils" with its Norton 2010 line of AntiVirus and Internet Security products. The tie-in will be supported with a custom comic book, a sweepstakes with accompanying microsite, in-store merchandise displays and a bevy of online, print and social-media advertising. The campaign will also extend to Latin America and Australia.