Every Big Production Is Sold as Must-See Spectacle, but Audiences Aren't Buying the Hype
READ THIS NEXT
How restaurant chains are duking it out to be the best in their categories
After the first weekend in June in 2009, 19 different movies scored the top spot on the box-office charts. In 2010, there have been only 11.

Yes, the first six frames of 2010 were won by "Avatar" and it's tempting to attribute the discrepancy in the numbers to that movie's dominance, which continued from its late 2009 debut. But even taking "Avatar" out of the mix -- which isn't all that accurate -- there have been more movies that have repeated in the top slot this year than in the same period of 2009: seven in 2010 vs. only four in 2009. 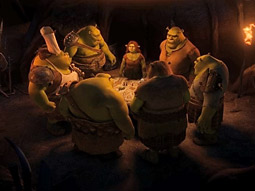 What's changed year over year, at least to my eye, is that the studios are compensating for what seems to be a weak slate of releases by ramping up campaigns to turn each movie release into an event, something that has to be seen right now. "Alice in Wonderland," "Clash of the Titans" -- even "Valentine's Day" was something to be seen on the titular weekend it was released.

The most recent repeat box-office winner is "Shrek Forever After" (or "Shrek: The Final Chapter" or "Shrek Goes Fourth," depending on which marketing assets you crossed paths with), which has claimed the top spot three weeks in a row despite being seen as such a weak performer after its first weekend it actually sent Dreamworks Animation stock down. That movie latched on to an event-creating hook that few others have been able to lay claim to, that this is the last chance audiences would have to enjoy the characters on the big screen (at least until the reboot in 2025).

That's a powerful motivator, though it's a card that few are willing or able to play. If a Hollywood executive were to suggest that the next "Iron Man" movie be the last one, I'm sure you could hear that person being fired as far away as Georgia. But Warner Bros. will likely be in just that position when the second part of the "Harry Potter and the Deathly Hallows" comes out in 2011.

This reliance on creating an event atmosphere around movies -- something that's been going on for a number of years now but really has seen some success in 2010 -- is coming at a time when theatrical windows are shrinking ("Alice in Wonderland" famously went to DVD less than three months after its initial release) and DVD revenues are dropping. That's meant more focus on a movie's opening weekend and a strong opening during that frame.

To some extent every movie-marketing campaign attempts to make the film it's supporting into an event. But while the campaigns for "Alice in Wonderland" (see Johnny Depp ham it up -- in 3-D!) and "Clash of the Titans" (see Liam Neeson release the Kraken -- in 3-D!) motivated audiences to spend their hard-earned dollars on high-priced 3-D tickets, the marketing for "Sex and the City 2," "Robin Hood" and other summer tentpoles didn't deliver, or at least didn't live up to expectations, an expression heard frequently during Monday-morning quarterback sessions.

So why fewer movies opening at No. 1? There are two possibilities that go beyond the usual explanations of the audience opting for hockey in Chicago, avoiding storms in a particular part of the country or other outside factors.

First is the notion that people have been so overwhelmed by other campaigns that anything that doesn't crank the volume to 11 doesn't break through the clutter anymore.

Second would be that despite event-level campaigns, people know weak material when they see it. So not only did they avoid it on opening weekend but those who did pony up their dollars then affirmed their friend's expectations that X movie was one to miss -- or wait to rent from Redbox.

When the other options look weak -- and it's hard to qualify this summer as anything else since "Iron Man 2" broke early -- people will seek out the comfortably familiar. That seems to be the lesson of 2010, beginning with the hold-over of "Avatar" for five or six weeks into the year. It also bodes well for "Toy Story 3," which will be released just as "Shrek 4" likely finally starts to fade from the top.

If future months bear this trend out, Hollywood may have to adapt its marketing strategy to account for something it hasn't really worried about for years: a movie with legs.