Is Hollywood Suffering From Clip Overload?

Looking at two of the movies mentioned above -- "Despicable Me" and "The Sorcerer's Apprentice," both movies aiming for some form of kid-dominated audience -- offers an opportunity to see what sort of impact this strategy has had.

In the case of "Despicable Me," releasing a batch of clips featuring the Steve Carell-voiced Gru and the young girls he adopts worked out well as the movie grossed $56 million its opening weekend. But audiences didn't react nearly as well to the extended scenes of a scruffy Nicolas Cage, with "The Sorcerer's Apprentice" only conjuring up $24 million in its first outing at the box office. 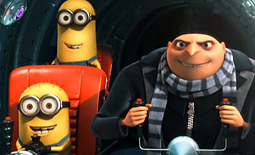 There seems to be more than a little Cold War thinking going on in Hollywood. No studio is able to back down from the pressure to put out such clips -- often extended scenes that were first glimpsed in the trailer -- in the final weeks of a movie's campaign. So where previously we may have gotten a five-second look at a particular scene, we then get a 1:18 look, available anywhere from Hulu to Apple Trailers to your favorite movie news site, which received them from the movie's publicity team.

(Interestingly the official websites for movies -- which really have been sucking wind lately -- don't usually host these clips. They may have one or two but not the number that are to be found elsewhere. Wouldn't that site -- supposedly the movie's central online presence -- be the perfect place for these? Just thinking out loud here...)

If some studio exec was to back away from that tactic while competitors didn't and the movie failed, fingers would be pointed clearly at said exec. So it's go big or be the fall guy. You may recognize this thinking from every advertising planning meeting ever.

In addition to adopting a mindset that's less strategic and more doctrine of proportional response, what's interesting is that Hollywood seems to have inadvertently created its own makeshift "freemium" business model. Studios have, in essence, decided to give away select portions of the movie in the hopes that these brief glimpses will increase the audience's appetite for the full version, for which they would have to pay up.

(By the way, for the sake of my own sanity I'm skipping over completely any discussion of what the studio reaction would be if, independent of their actions, a handful of movie clips were to show up on pirate download networks.)

Reactions to these clips aren't always going to generate the intended consequence. Some portions of the audience are going to react positively to these clips and (as the studios hope) feel like what they saw, combined with the other marketing elements, present the movie as being worth the $50 it can cost a family of four at the cineplex -- and that's assuming it's not a 3-D presentation and without popcorn or candy. But at some point there's also going to be a portion of the audience that sees 10 minutes of the movie online and decides that one goes in the Netflix queue.

Whether a massive release of clips works for one particular movie or another is going to depend on the movie itself, because what these clips do is use the movie itself -- at least select chunks of it -- to sell the package. That leaves the only potential problem being that these teases of the finished product are going to turn off audience segments. Obviously, though, that's a risk the studios have deemed worth taking because it doesn't seem this trend is going away any time soon.

What it comes down to is how these clips work in conjunction with the rest of the film's marketing campaign. A bevy of clips may not save a movie if the rest of the campaign seems to be hiding the stars. And they won't work if the movie isn't receiving a full-court media effort. Too often, recently, there are movies that have a vast collection of clips released but which appear to have little other support, which may be more to blame for a particular movie's success or failure than anything else.