Do Product Placement? Here's How to Future-Proof Your Brand | Ad Age
Skip to main content
Sign In Register

Do Product Placement? Here's How to Future-Proof Your Brand

Viewpoint: Those Product Shots Get Old Fast, So Give Consumers Something to Marvel at on Repeat Viewings
READ THIS NEXT
How restaurant chains are duking it out to be the best in their categories
Hello, my marvelous, marketing marsupials! Its time for another come-to-Jesus talk about what you're doing wrong when you think you're doing it right with brand integrations.

Please step into my time machine. It is 1987, and you are watching Oliver Stone's brilliant movie "Wall Street." Gordon Gekko, the super-rich evil guy played by badass Michael Douglas, is on the beach near his house and wants to call his naughty sidekick Charlie Sheen, so he whips out his Motorola Dynatac wireless phone that is so heavy it would break his big toe if he dropped it. Did the integration sell any phones? Maybe? Was the placement/integration relevant a year later? Nope. Samsung handsets did the same thing with the "Matrix" sequels. Guess what? Same result. 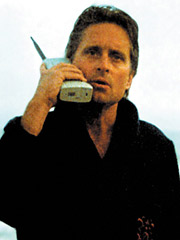 So if you are a marketer that is fixated on a current or soon-to-be-released model of your product, think again: "It's the brand, dummy!"

Roll with me. In "I, Robot" Will Smith rocked a concept Audi car in a key chase scene the same way Tom Cruise sped his factory-fresh Lexus away from the bad guys in "Minority Report." But were they soon-to-be-released models? No. What did those auto manufacturers do? They placed the brand above any specific model. If Motorola had been forward thinking, it could have tapped the creative genius of its designers and handed Michael Douglas something approaching a Razr that was prominently branded. (Think about how this could have an even greater impact in sitcoms and one-hour dramas that enter syndication.)

Now I know "I, Robot" and "Minority Report" were science-fiction movies, but hear me out. Auto manufacturers have learned from national auto shows. Concept cars generate excitement, but a trade-show exhibition area is visited by, what, 50,000-plus people in a week, a couple hundred thousand online? Now amp that bad boy into a feature film with a major star that is released on 3,000-plus screens on a major holiday, and then internationally, then on pay per view, DVD rental, DVD sales and, finally, broadcast ad infinitum like you just don't care.

All right, "Wall Street" was released in 1987, so are there recent films in which brands missed the opportunity to future-proof themselves? Yes my possums.

I'd like to focus on Dell. (I love Apple, but no props there. Apple doesn't pay for integrations, so if you see a product in a film, it's a gift from the prop master/set designer.) Dell, you placed your off-the-rack products in Tony Starks' lab in "Iron Man." Really? The guy is a billionaire in the tech industry, he doesn't do off the rack. You also went off the rack for "24." Shame on you. You are a leading technology manufacturer that is showing zero "wow factor," "I want that" or, guess what, wait for it, hold your breath, "excitement." You dropped the what? The "innovation baton." (Insert a scathing "Saturday Night Live" sketch here with pelvic thrusts from what's his name) I mean Polaroid signed Lady Gaga because it knew it was losing its relevancy, but you guys are just pushing out the same old, same old with the ghost of Gateway sitting in the balcony rubbing his hands together in glee.

But Dell, you have no excuse. You have an entire agency dedicated to finding integration opportunities, but what did you miss? "Date Night," starring Steve Carell and Tina Fey. Mark Wahlberg plays an ex-spy, and the couple enlists Mark's character to help them find the bad guys. So the ex-spy sits at his high-tech workstation with three translucent, flat-screen touch screens -- that are not branded (hear me cry, see me weep). They could have been Dell! That could have made the brand cool -- gasp, cooler than Apple -- but no one identified the opportunity and made the call.

Marketers, future-proof your brands. What is more important, a specific model or the brand?

I'm an advocate for filmmakers and brands, but I'd love to see and work on smart deals, and I'm wondering who the takers are. Disclaimer: No, I'm not saying you can future-proof burgers, toothpaste, beverages, watches or deodorants -- but you knew that, right? -- but if you are producing/marketing durable goods, do the extra work, and it will pay off in the long run.

Brett Renwick
View all articles by this author