NBC's Lorne Michaels and Co. Create Spots Based on 'MacGruber' Sketches
READ THIS NEXT
How restaurant chains are duking it out to be the best in their categories 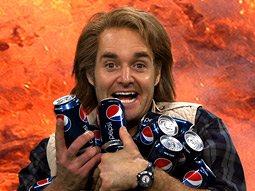 Madison Avenue is known for a litany of storied acronyms, such as BBDO and DDB. But is advertising's hallowed capital ready for another pair of familiar but eyebrow-raising initials: NBC and SNL? And could a show producer such as Lorne Michaels become the next sought-after creative director?

In a move that some viewers considered shocking, cast and crew from the Peacock Network's venerable "Saturday Night Live" crafted three ads for Pepsi that essentially grafted mentions, cans and logos of the famous soda into three different executions of "MacGruber," a long-running spoof of the old "MacGyver" TV series. The ads looked just like "SNL" skits but ran during commercial breaks on the Jan. 31 edition of the show. One of the ads also appeared during the recent Super Bowl. Pepsi's ad agency, Omnicom Group's TBWA/Chiat/Day, had little if any involvement in the commercials.

"We definitely feel like it's not a one-off," said Pepsi-Cola North America spokeswoman Nicole Bradley, who suggested Pepsi would be interested in working with both "Saturday Night Live" and other TV programs in the future. "It's a very determined step to connect with consumers in a new, contemporary way."

More open to mixing ads and programs
Hit hard by the sagging economy and mindful of the need to keep ad-zapping couch potatoes watching during ad breaks, TV executives are now open to ideas about mixing ads and programs they would likely have spurned just five years ago. Programmers are stepping up as marketers show more interest in crafting promotions tied directly to the content in which they appear. That gives a media outlet running the show more power -- no matter how many years an agency and a client have spent joined at the hip.

In November, for example, viewers of CBS's "Late Show With David Letterman" were surprised to see the host utter the words "Hey, we'll be right back after this special message from Mazzz-da." Those tuning in then saw a cutaway to Alan Kalter, the show's announcer, talking up the benefits of the new Mazda 6 while seated in a bright-red version of the automobile parked outside the famous Ed Sullivan Theater in New York. Mr. Letterman has a reputation for being extremely guarded about the quality of his show and has not embraced advertising antics as readily as rivals.

As creator and executive producer of "Saturday Night Live," Mr. Michaels also is concerned about the integrity of his long-running program, which regularly skewers Madison Avenue hyperbole with a steady barrage of parody ads. For that reason, he said, the Pepsi work could never run in the program itself. "It was very clear that it was a commercial, and I thought for our audience it was fun. I don't believe it compromised the integrity of 'MacGruber,'" he said.

But it seems clear that this sort of thing is unorthodox for the man whose program has strong anti-establishment roots. "These are perilous times," said Mr. Michaels, who added that he normally has little interaction with NBC's ad-sales department. "The network is going through transition," he added. "I'll do whatever is necessary to support the network."

A turning point
His participation is seen as a turning point among executives who put together branded-entertainment ventures. "Seeing Lorne Michaels say he gets it and he is going to do what he can to support the business, it speaks volumes to how serious it is," said Alison Tarrant, senior VP-integrated sales and marketing at the CW network, which has created between 20 and 30 pieces of content for advertisers.

While no one will dispute that Mr. Michaels knows what works best on his show, Pepsi's move has sparked some grumbling at TBWA, which won the business late last year from Pepsi's decades-old partner, BBDO. A person familiar with the matter said TBWA executives wondered if the "SNL" effort would be viewed as a "cutesy one-off" rather than part of a broader, connected campaign.

Still, there's a strong argument for letting people who are entrenched in a particular venue think for themselves. "In the new way of working, you make a decision to identify creative talent, and you trust them and you let them do what they do best, instead of meddling in the process," said Peter Arnell, whose Omnicom-owned Arnell Group is advising Pepsi in several of its recent marketing efforts, and who developed the "SNL" idea with Ben Silverman, co-chairman, NBC Entertainment and Universal Media Studios. "I would have no idea what to tell Lorne."

Working with marketers
Producers of scripted prime-time fare are already showing more interest in working directly with marketers. A sponsor's money can fund more sets or casting for a show, said Gary Scott Thompson, executive producer of NBC's "Knight Rider" and also of the canceled "Las Vegas" -- an attractive proposition in difficult economic times. "A lot of people are looking to do it, and looking at a situation where it's not just a complete whore-out," he said.

Are TV networks taking over duties once held by ad agencies, or can the two work side by side? At "SNL," Mr. Michaels suggested work for Pepsi or other advertisers would be rare. He said he had a level of contact with senior Pepsi executives and creative freedom he imagined would not be part of regular dealings with ad clients.

But NBC's Mr. Silverman sees opportunity. In addition to creating programs, he said, "one thing we can do is help marketers by using our entertainment portfolio in unique ways." He said viewers can expect more content in the vein of the "SNL" ad sketches. "Next time, it may look completely different, and it may be a different show entirely and a different brand, but the bottom line is we're going to keep trying to experiment," he said.