The chain's robust second quarter was underpinned by drive-thru orders, carryout and, increasingly, delivery. But labor challenges linger.
READ THIS NEXT
How research drove the bold rebranding of an iconic company
Credit: Bloomberg

The restaurant labor market in the U.S. has been tight for months, and McDonald's announced in May it would increase hourly wages at its company-owned stores in an attempt to garner more interest from potential workers.

Franchisees have also been getting creative, offering perks like free child care to workers, McDonald's CEO Chris Kempczinski said during the company's conference call this morning. The situation is getting better, and more applications are coming in, he said. But there is still progress to be made.

"I'm constructive and positive on the staffing outlook in the back half (of the year). I think we're going to continue to make progress," he said. "But it certainly is a challenge."

Staffing issues have had a negative impact on service times, adding about three seconds onto the average interaction, Kempczinski said. "We don't love that," he added.

McDonald's has been working for some time to cut its drive-thru times and says it has trimmed about 30 seconds in recent years. Despite those challenges, comparable-store sales rose almost 41% globally from a year earlier, outpacing the 39% gain that analysts expected.

By the same measure, McDonald's also beat Wall Street projections in the U.S. and its international markets.

The results underscore how McDonald's has emerged from the pandemic stronger, underpinned by drive-thru orders, carryout and, increasingly, delivery. McDonald's said online and mobile orders in its top six markets climbed 70% year-to-date, showing the company's investment in the area appears to be paying off.

In the U.S., where McDonald's has nearly 14,000 locations, sales were helped by a new chicken sandwich. Revenue was boosted by "strong average check growth driven by larger order size and menu price increases," the company announced in a statement. A new celebrity meal offering, chosen this time by the South Korean boy band BTS, fueled results across the globe.

The BTS meal has also helped fuel downloading of McDonald's app, and spark interest in its new loyalty program. Kempczinski said on the call that its McDonald's Rewards program had garnered 12 million users. The company rolled out the program a little over two weeks ago, and kicked off the advertising campaign Monday.

"I'm increasingly encouraged by what I'm seeing so far with the loyalty rollout," Kempczinski said. It's "a great start and a testament to customer pent-up demand."

Sales overall rose 57% to $5.89 billion in the quarter, while adjusted earnings increased to $2.37 a share, exceeded analysts' projections of $2.11.

The company may face a new round of Covid-related restrictions, however, as cases once again climb in much of the world, fueled by the contagious delta variant. 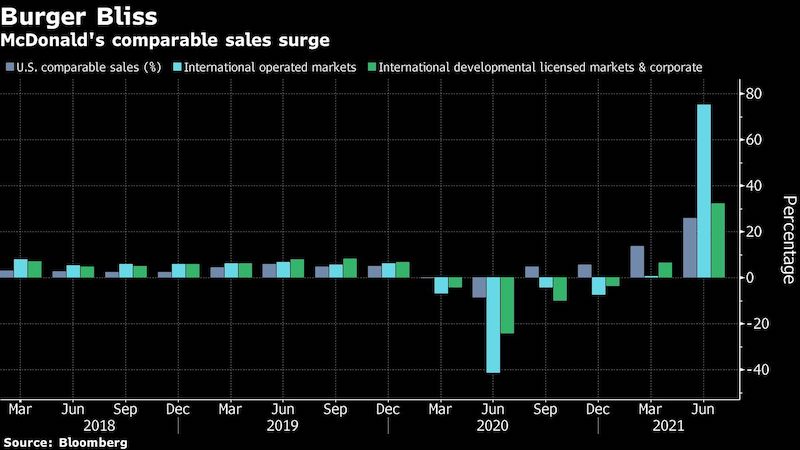