Every one to two months a new retail media network is born
READ THIS NEXT
Layoffs and budget cuts—tracking economic moves and news
Credit: Composite images: Bloomberg LP, Albertsons

By creating its own retail media network earlier this month, Lowe’s jumped on a hot trend that is poised to get even hotter in 2022. A growing list of companies that years ago acted solely as ad buyers are now selling ads to outside brands looking for exposure on retailer-owned websites, email lists, apps and more. Home Depot, Macy’s, Dollar Tree and Best Buy have all created or expanded existing media networks in recent years. They’re all seeing that there’s money to be made by leveraging the reams of data they have on shoppers by offering targeted ad placements to brands that are seeking to reach consumers at the right place and time.

“We’ve come through a year and a half of recognizing this obviously intensified focus on home and home lifestyle, and Lowe’s is uniquely positioned to aggregate and understand an audience that’s interested in that and allow our partners to benefit in it,” said Marisa Thalberg, executive VP, chief brand and marketing officer at Lowe’s, which is reporting early robust demand for its so-called Lowe's One Roof Media Network.

Two years ago, Forrester Research predicted the growth of marketers as media players as a major trend in 2020—yet the rise in online shopping, the desire for retailers to create additional revenue streams, and the need for advertisers to track customers ahead of the end of the cookie have all cause that growth to blow past industry expectations. Now, every one to two months a new retail media network is born, according to a September report from Merkle Co., the Dentsu-owned performance marketing agency. In addition, 81% of consumer packaged goods brands plan to grow their investments in retail media networks within the next 12 months, Merkle found, noting that such advertisers are dedicating more resources to create internal divisions to manage their retail media portfolios. The growth could upend the worldwide advertising landscape—Forrester estimates retail media will be a $50 billion advertising business globally next year.

“This is a growing beat that’s going to provide a lot of competition to the global advertising markets,” said Collin Colburn, a senior analyst at Forrester. “This is a category that is going to threaten Google and Facebook to a degree—it’s not going to wreck their businesses, but it is going to make the dollars they get for advertising much more competitive because the retail media market overall will be sizable.”

The proposition that retailers are conveying to advertisers is becoming more sophisticated, experts have found. A basic package used to simply include selling a vendor ads on a retailer’s own website. But now, some retailers are acting more as a pure-play media agency, securing and selling ad inventory outside of their own properties. For example, Target’s media business Roundel will buy placements on channels such as Pinterest, PopSugar or NBCUniversal, the company has said. Lowe’s new offering includes digital and social media extensions for brands to reach certain customers as well as custom research and the typical closed-loop reporting on shopper data that set retail media networks apart from non-retailers.

The benefits of launching a media network can be sizeable for retailers, which are sitting on a treasure trove of first-party shopper data, analysts said. One of the biggest reasons for a retailer to build networks is to add a new revenue stream. Typically, grocery stores and other retail chains have very low profit margins on products; a media business, however, could have margins between 50% and 70%—making it a significant profit center, Colburn said. Many retailers also want to expand their e-commerce business by drawing in more visitors to their websites with new ads that could lead to product discovery and repeat shoppers, as marketers try to become more like Amazon when it comes to search.

The trend of diversifying into the media business is moving beyond traditional retail. Uber, DoorDash and Instacart have all boosted their advertising offerings in recent months. Such e-commerce-led initiatives are a different value proposition for brands, according to Megan Cameron, VP of monetization for New Stream Media at Merkle. Unlike retail-owned retail media networks, where advertisers can target audiences and see sales lift in stores and online, e-commerce retail media networks offer a wide view of a customer across multiple retailers. For instance, Instacart can show advertisers how consumers are shopping at Walgreens, ShopRite and 7-Eleven—which are all brands offered by the delivery service. Merkle found that 4% of CPG brands are working within Instacart’s network, while 1% are advertising with Gopuff, a similar delivery service—both figures are up from zero in 2020.

“People are looking for ways to engage in a digitally-first way and being able to monetize that experience for the CPGs in that equation is important,” said Cameron. “You’re reaching this subset of people that look a little different than just a retailer-led audience.” 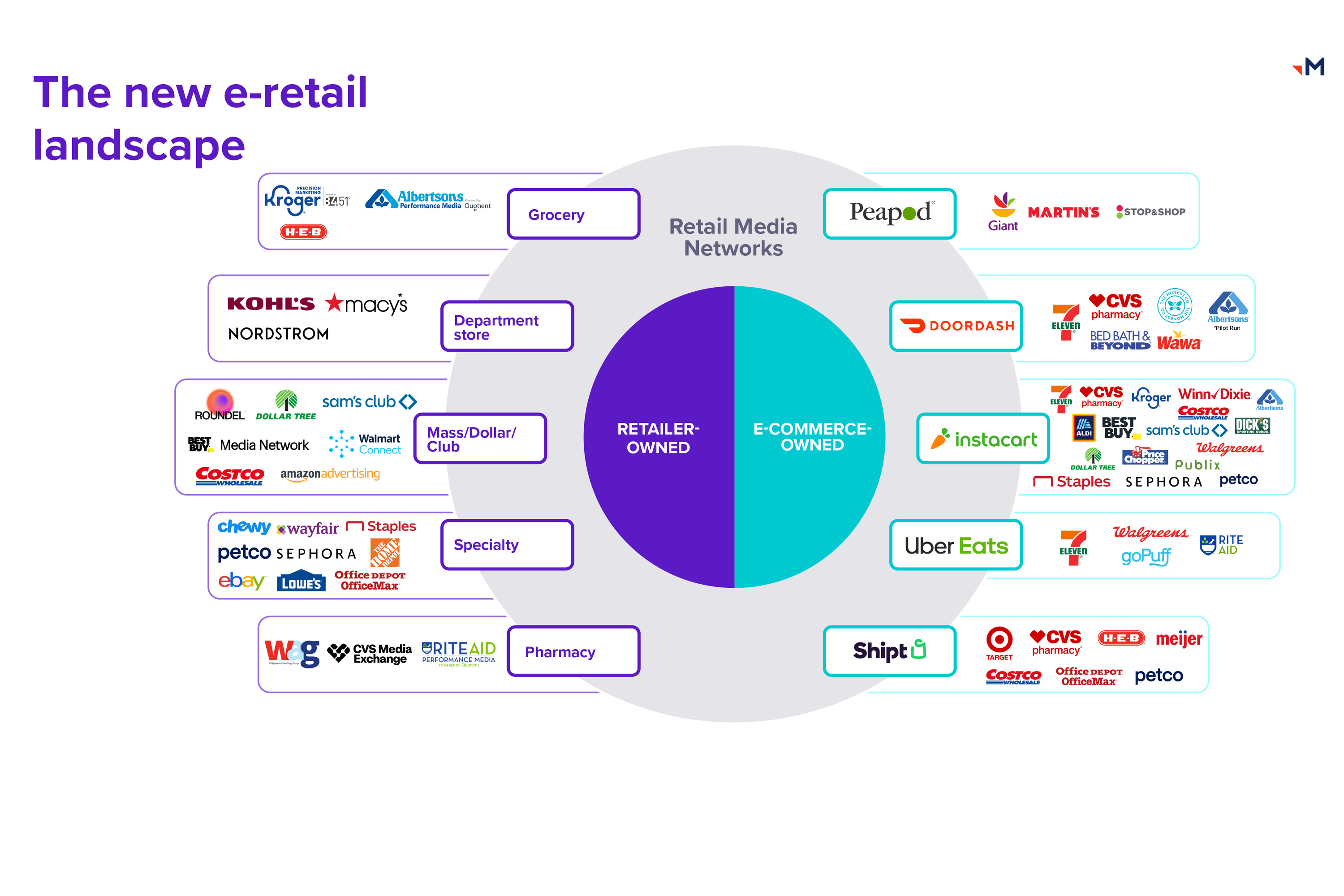 Of course, with so many marketers offering their own ad solutions, it can be complicated for a brand to navigate the cluttered landscape. There is no all-encompassing provider that would allow a vendor to advertise with different retailers at once because no retailer wants to share with a competitor. Currently, media agencies are helping brands place deals in each retail media network. However, experts said there could be a future where agencies are no longer needed as retailers continue to take on more of the buying and placement duties.

“Right now most agencies are liking this because a good chunk of brands are still using their media agencies to place the deals in the media network,” said Colburn. But he noted that many retailers have characterized their media networks as being agency-like as the intermediary between advertisers and the consumers. “Placing messages for an advertiser at the right place and the right time to the right consumer sounds like an agency to me. [Brands] might start seeing their retailer partners as more strategic partners than their agencies.”

As brands manage the complexities of advertising in different retail media networks, they’re building out better internal operations. In the last year, many CPG brands have created a “center of excellence,” an internal group that works with both outside agencies and retailers to place ads and keep track of the portfolio. Merkle found that 96% of CPGs have a center of excellence to support RMNs, up from 86% last year.

“How Roundel [Target’s media business] goes to market is different than Walgreens or Walmart and that is complicated for a brand to be able to navigate, which is why they are investing in and thinking about a center of excellence. Should my shopper marketing agency own this or my brand agency own this? How do I make sure my dollars are appropriately invested across this gamut of the landscape,” said Cameron.

Retailers that already built successful retail media networks are expanding them. During Advertising Week, Kroger announced the launch of a private programmatic marketplace, a self-serve platform where brands can track the grocer’s customers on the web. The grocer has operated its own media network, called Kroger Precision Marketing, since 2017.

“That’s a standing RMN actively evolving their offerings to meet the needs of their suppliers,” said Cameron. “Self-serve options are one of the bigger trends brands are offering.”

Best Buy, which has also had its own media business for several years, recently rolled out a teaser site for “Best Buy Ads Coming Early 2022.” A spokesman confirmed it is an “evolution of the ad business” for the electronics seller but declined to provide more information.

After founding its media network nearly two years ago, TripAdvisor saw COVID-19 take a bite out of business initially. Yet the company has been able to still do deals with advertisers outside of travel in categories such as automotive and spirits, for example, according to Christine Maguire, general manager and VP of global media business at TripAdvisor, speaking on a recent episode of Ad Age Remotely. An automotive brand might buy an ad on TripAdvisor in hopes of luring car purchases from consumers itching for a roadtrip. Ford and Tesla both recently ran campaigns with the marketer, according to a spokesman. Since the majority of travelers, or 60%, aren’t sure where they want to go, TripAdvisor has been able to measure how ads influence decisions.

“Destination is a really big example where [advertisers] can measure the impact of ad exposure on our site then rationalize every single investment they’re making with us,” Maguire said, noting the richness of TripAdvisor’s first-party data. “We are really excited about the potential as we head into 2022 because of the success we’ve seen despite being a travel company during a global pandemic.”

Macy’s is also in growth mode. The department store chain started its media business last year and expanded in the spring to include its Bloomingdale’s sister brand. Thus far, Macy’s has run more than 800 campaigns for 140 advertisers on Macy’s and over 90 campaigns for 80 advertisers with Bloomingdale’s. While Macy’s has some outside partners, the retailer has built out a robust in-house sales team to manage and scale the media business, according to Melanie Zimmerman, VP of Macy’s Media Network.

“It was very clear to us from the beginning that we want to make this a core part of our business and with that we want to make sure the core functions are in-house,” she said. “We will continue to hone in on what we do really well which is the storytelling for our brands across Macy’s and Bloomingdale’s and connecting them to the most attractive audiences.”

Other retailers are just beginning to tout their new media offerings. Many are thinking ahead about privacy implications for shopper data and how they can still deliver an effective solution for advertisers. Grocer Albertsons this year hired Kristi Argyilan, who built Roundel at Target, as senior VP of retail media to grow its ad solution. Argyilan spoke recently about balancing personalization with privacy.

“How do you continue to respect what consumers want from a privacy perspective and also from personalization perspective and how do you work within the confines of the law while still giving customers the services that they demand from us,” she said at an Advertising Week panel. “Anticipating where the privacy laws are going to go long-term is a lot of the work we’re doing right now so we’ll be prepared to serve both the law and what the customers are asking for from us.”

Lowe’s says that since announcing its debut of One Roof Media Network earlier this month, the retailer has already received “numerous” requests from prospective advertisers after launching with 100 brands. Lowe’s is working with Publicis’ CitrusAd and Criteo; it also worked with consultancy Franklyn West on strategy. Thalberg noted that Lowe’s has seen some “very encouraging signals about the viability” of the new offering. The chain plans to add on-site inventory and select off-site partners as it grows in 2022.

“Retail media networks are exploding—they’re here to stay,” said Merkle’s Cameron. “For them to all stay compelling and capture the right amount of dollars, it’s staying true to their individual visions and mission statements.”