Why podcasting won’t be anything more than a niche ad vertical: Opinion | Ad Age
Skip to main content
Sign In Register

Why podcasting won’t be anything more than a niche ad vertical: Opinion

The early numbers and growth rate show that most consumers are taking a pass
READ THIS NEXT
How brands and agencies are dealing with COVID resurgence—a regularly updated list
Credit: iStock

In an Ad Age essay last week, IAB’s Chris Bruderle wrote that better ad tools, holistic third-party measurement and improved listener experiences will significantly increase podcast advertising. I agree with his thesis, but don’t believe podcasting will be anything more than a niche ad vertical.

Despite billions invested in podcasting from companies including Amazon, Apple, iHeartMedia, Spotify and more, the early numbers and growth rate show that most consumers are passing on podcasts. Here’s why:

Most people can’t podcast and multitask

If people could work and listen to podcasts simultaneously—as they do with music—podcasting would have a better chance. Sure, you can listen to podcasts while folding laundry, ironing, cooking and commuting, but we’re all doing less of that as we work mostly from home.

Podcasts are designed for a captive audience

Beyond this attention challenge, podcasts are designed for a captive and static audience. It’s difficult to skim through a podcast as you can with a newsletter, app or e-reader, which further limits the ability to engage users via podcast advertising. In the 1980s, the radio trade advertising industry ran a brilliant ad campaign highlighting the value of audio as a storytelling medium entitled ‘‘I Saw It On The Radio,’’ but this was when radio was a more dominant medium and, alongside TV, one of only two main electronic media for advertising.

Podcasting is more news than entertainment

There is no doubt that entertainment is going through a revolution as video viewing migrates from cable and movie theaters to streaming. That’s why Netflix is gunning for Oscars and movie studios are shortening the window between movie theater release dates and broader distribution. We’re now binging series on our phones instead of waiting a week to watch the next episode.

But is podcasting part of this entertainment revolution? Even though podcast listening includes entertainment news, including gossip and music, it is more of a news distribution channel. Unfortunately, news organizations aren’t enjoying the same growth that Netflix and Disney+ are achieving. Let’s take a look at The New York Times, a news publisher with a global audience that’s performing relatively well. Though revenue for The Times increased since 2016 —The Trump Bump —the company’s revenue is still down 30% since 2010 and 45% since 2006.

With most consumer-focused marketers preferring to advertise on entertainment programming, this isn’t ideal for the marketing potential of podcasting.

Where podcasts do provide value are as a new and different channel for existing news organizations to engage with their users in a way that complements a blog, newsletter, or even a print newspaper or magazine.

Look at the audiobook market

The aforementioned market size issues aren’t limited to podcasting. They impact other audio-based media, too.

According to Deloitte’s 2020 Technology, Media and Telecom predictions, the market forecast for podcasting was $1.1 billion and for audiobooks was $3.5 billion. Print books, on the other hand, were forecast to be a $145 billion market, more than 40 times the size of the audiobook market. Audiobook market leader Audible launched in 1995 and has been on Apple’s iTunes store since 2003, so these market figures are for a mature audiobook market.

Podcasting is growing rapidly but from a very small base

As a marketing guy, I like to get excited by new marketing channels, but before I worry about issues including ad scale and measurement, the number of podcast listeners just isn’t enough to justify the hype and the valuations.

Though audio is having its moment, podcasting is still web 1.0

Audio apps, namely Clubhouse, as well as Spaces from Twitter, Yac, Wavve, Riffr, and Spoon are trending as more people get into audio. There has also been growth in voice assistants (and voice search optimization) and text-to-speech apps—new technologies are enabling us to consume content and engage in different and better ways. Listening to a podcast in 2021 is very similar to listening in 2001.

I listen to several podcasts every week including ‎The Prof G Show with Scott Galloway and Marketplace, as well as local Israeli podcasts including Ear Catcher, Gefen, and Geekonomy, so I’m a believer in podcasting. But the numbers just aren’t there, whether it’s the number of listeners, ad dollars, listener growth, to enable podcasting to go beyond niche.

There’s nothing wrong with being niche. Some great product categories and brands are niche, including Porsche, DC Shoes, and Jamis Bikes, but to justify high valuations and streaming-like buzz, podcasting is just not there. 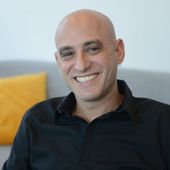 Omri Argaman is CMO of Zoomd, a mobile user acquisition and site search platform for publishers.