Have You By Any Chance Seen Shiloh? | Ad Age
Skip to main content

Have You By Any Chance Seen Shiloh?

What Everyone Is Talking About
Pretty baby.
Credit:

NEW YORK (AdAge.com) -- Last week, Watercooler and the rest of the world was impatient for photos of Shiloh Nouvel Jolie-Pitt. (What's that phrase? Be careful what you wish for?) Now, after an exciting week full of legal threats and copyright infringement, we were blessed this morning with 10 pages of Shiloh overindulgence, thanks to big winner People. 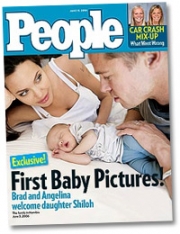 Pretty baby.
Our appetites were whetted yesterday by the front pages of the Daily News and New York Post, which were helping People trumpet its exclusive (unlike the pics circulating the blogosphere ahead of People hitting the newsstands, which were decidedly not part of the weekly's PR plan). The highly anticipated issue featured six photos of baby Shiloh, asleep in almost all of them, with her parents and serene older sister Zahara (a complete Jolie-Pitt family portrait, with older brother Maddox, will have to wait).

In a bit of lovely timing for Time Inc., the Shiloh issue just happened to coincide with the "People Extra" summer edition focusing on celebrity babies, everything from maternity fashion to post-baby workouts.

As baby Shiloh photos now legally infiltrate homes across America, should the betting begin on Brad and Angelina wedding photos? Don't hold your breath. In a press conference Wednesday, Jolie deflected marriage speculation, saying the focus right now is on the children.

So what was left for the celeb weeklies that lost out on the most highly anticipated baby pictures of the year? Wenner's Us Weekly went back to the old reliable, Britney's marriage troubles well, backed up by Ashlee Simpson's new look. Bauer's In Touch Weekly, in an attempt to still cash in on the Brangelina baby craze, provided an in-depth diary of the new parents (in case you were wondering, Pitt is a "pro diaper changer"). American Media's Star opted to cover Jolie's birthday bash and included a very pixilated image of the mother the day before she gave birth. (See what happens when you shut out the Star? They run the least flattering photo they can find of you.)

While their baby news is well behind them, Tom Cruise and Katie Holmes made headlines in Life & Style for a reported $33 million prenuptial agreement. After providing the scoop earlier this year that Holmes will run once having the baby, the tabloid is now reporting that the wedding is back on. Financial security is Holmes' main reason to marry Cruise, according to the magazine, and the couple looks to tie the knot sometime this summer or fall. If the two should divorce, Holmes would receive $3 million for every year they were married, up to 11 years. And in case anyone cares, baby photos of their little bundle of joy, Suri, are still MIA.

Meredith Deliso
View all articles by this author