What Everyone Is Talking About
READ THIS NEXT
How restaurant chains are duking it out to be the best in their categories
Jonathan Wald
Credit: 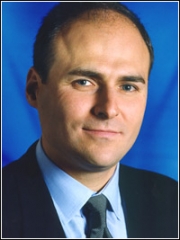 Jonathan Wald
Mr. Friend, who had been at the channel eight years, is leaving to "pursue other opportunities." He is being replaced by Mr. Wald, who joined the channel in 2004 and is a former executive producer of the channel's nightly business-meets-pop-culture show, "On the Money." The announcement puts to rest speculation that Mr. Wald, a former executive producer of NBC's "Today" and "NBC Nightly News With Tom Brokaw," might land at ABC's "Good Morning America."

Mr. Wald, who has a decidedly populist take on business news, will now reign from 4 a.m. to 8 p.m. He takes responsibility for business day programming and early evening shows including "Mad Money With Jim Cramer" and "Kudlow and Company."

Ratings for "On the Money," with host Dylan Ratigan, have grown 72% since October 2005, and year-on-year the show is up 20% in the important 25-to-54 demographic vs. a year ago. Under Mr. Wald, "On the Money" has covered the ad business closely. The show, which broadcast nightly coverage from this year's broadcast network upfronts, will now be re-broadcast at 11 p.m. EST.

CNBC is one of NBC Universal's most profitable units. According to TNS Media Intelligence, total 2005 ad dollars were $306 million.