Tabloid Report: Tom and Katie Going to the Chapel

What Everyone Is Talking About
Weddings and fisticuffs in celebrity land
Credit:

NEW YORK (AdAge.com) -- Mark your calendars, folks. A date has finally been set for Katie Holmes and Tom Cruise's wedding, and the tabloids are sharing all the nuptial details. 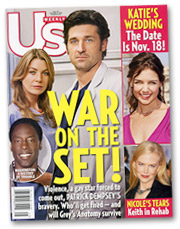 Weddings and fisticuffs in celebrity land
After weeks of being fed "soon," the tabs have learned the couple will wed Nov. 18 in Italy. In Touch leads this week with all the happy details, though not all is sunshine, as the family has been fighting. (Ah, well, you know the stress of planning a wedding.) Us Weekly confirms wedding details as well, reporting that Holmes will be walking down the aisle in a wedding dress designed by friend Giorgio Armani. Cruise, too, will be decked out in Armani. As invitations are sent the world over, Star fills us in that Scientologist friends John Travolta and Leah Remini are invited, as well as Steven Spielberg and Oprah Winfrey (on whose couch it all began).

Not too long ago, the tabloids were all over Nicole Kidman's wedding to country crooner Keith Urban. Now, less than four months later, the couple is in the weeklies again, though for less joyous reasons. Headlines of "Nicole in tears" are out this week as Urban enters rehab for alcohol addiction (there was a stint eight years ago for cocaine addiction). People, which put the couple on its cover, reports Kidman is surprised but standing by her man. Both stars have issued statements about the news, and Kidman said: "I'm standing by his side, and that's all I have to say." Naturally, the weeklies have more to say, and while Us Weekly suggests that with Kidman by his side, the road to recovery may be less difficult for Urban, Star reports that one more strike against him, and she's out of the marriage.

Fans of "Grey's Anatomy" have been tuning in to some real-life drama in between episodes recently. Us Weekly leads with the "war" that has broken out on the set as violence and gay slurs make headlines. An altercation between Isaiah Washington and Patrick Dempsey has the magazine wondering if Washington will be fired for losing his temper with McDreamy and using a gay slur that led cast mate T.R. Knight to confirm he is gay. While the tabloid reports that the buzz on set is Washington will be replaced, his rep tells the magazine that all has been resolved since the Oct. 9 incident. Star urges readers to stay tuned as the drama develops off set.