CHICAGO (AdAge.com) -- Need proof that the media recession is over? Consider this: Reported revenue for the nation's top media firms climbed 6.1% in the first half of 2010, according to Ad Age's analysis. First-half measured ad spending rose 5.7%, with gains in every sector except newspapers, according to Kantar, and media employment shows signs of stabilizing.

That drop would have been far worse were it not for cable. Video and broadband providers -- cable systems and their satellite and telecom-owned rivals -- managed a 4.3% revenue gain in 2009, reflecting their ability to hike prices and upsell consumers on premium broadband and video services. Revenue for cable networks jumped 4.7%, largely reflecting their ability to get more money from cable/satellite/telecom companies that carry the channels.

Factor out video and broadband providers, and Media 100 revenue tumbled 8.3% in 2009, according to the Ad Age DataCenter.

Better to be the cable guy than the magazine guy: At No. 14 Advance Publications, revenue from a regional cable-system venture (Bright House Networks) last year passed magazine revenue (Cond? Nast, Parade and other publishing units), according to Ad Age DataCenter estimates. The private company declined to comment.

Overall broadcast TV revenue for the Media 100 tumbled 13.2% in 2009. That decline reflects both the recession (which officially ended in June 2009) and the void left by 2008's spending on political advertising and the Summer Olympics. TV revenue is rising this year thanks to an improving ad market and mid-term election spending.

The newspaper industry continues to suffer death by a thousand paper cuts. The industry has slashed one in four jobs since the start of the recession; employment today is roughly half the level of the industry's 1990 peak. Newspapers were the only media sector to see a drop in first-half 2010 measured ad spending, according to WPP's Kantar Media.

Add up all the figures, and Media 100 revenue totaled $309 billion in 2009, down 3.8%. Figures come from Ad Age's tally of broadly defined media revenue including advertising; subscriptions; movie tickets, DVDs and video-game software; and fees from TV production/licensing. Video games are new to this year's report, reflecting the blurring of media content.

Media revenue this year is tracking at a 6.1% growth rate based on Ad Age DataCenter's analysis of first-half reported revenue for major publicly held media companies.

A look at job data offers more signs that the market is turning. U.S. media employment fell 9.2% in 2009, but staffing has shown signs of stabilizing in recent months. 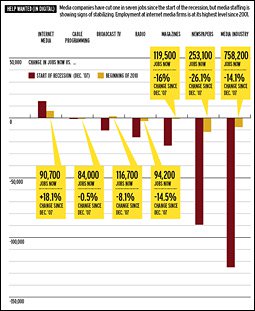 For the first time since 2006, media employment has risen for two consecutive months, according to Ad Age's analysis of recent Bureau of Labor Statistics data. (See detailed figures at AdAge.com/adjobs.)

Internet media companies and broadcast TV have seen solid year-to-date job gains. There's even hope in newspapers, where recent monthly job cuts are at the lowest level since the start of the recession.

Media 100 revenue held up comparatively well during the recession because of the diversity of revenue sources. Subscriptions and fees, for example, fared better than advertising. U.S. measured-media ad spending last year plunged 12.3%, according to Kantar.

Consider: News Corp. said revenue for its U.S. cable channels jumped 14% in the year ended June 2010, with a modest 3% rise in ad revenue but a whopping 19% jump in fees from cable/satellite/telecom video services. (Telecoms are a big deal; Verizon Communications and AT&T were the nation's No. 8 and No. 10 providers of pay TV service in 2009.)

News Corp. Chairman-CEO Rupert Murdoch is pushing hard to build fee revenue in online media (where WSJ.com has a strong subscriber base) and TV broadcasting (getting fees from cable/satellite/telecom companies).

Under the 1992 Cable Act, TV broadcasters can negotiate with multichannel video programming distributors -- cable, satellite, telecom -- over the right to retransmit a local broadcast signal. But only recently have broadcast networks begun to extract significant revenue from these "retrans" fees. Owners of major broadcast networks -- who all also own cable networks -- want broadcast TV to have the dual ad/fee revenue sources long enjoyed by cable channels.

Broadcast fee revenue is starting to benefit the top line. Mr. Murdoch told analysts last May: "In broadcasting, we're now on track to build a dual revenue stream that enables Fox to achieve real value, one that equals its strength and importance to viewers. And we will continue to negotiate hard with all our distribution partners to ensure we remain on this track. Retransmission is a real breakthrough."

Joseph Ianniello, CBS exec VP-chief financial officer, said at a September investor conference: "We are at the embryonic stage of this kind of revenue."

Rising fees for cable networks and for retransmission consent has mixed meanings for Comcast. The top cable system firm cuts big checks to cable networks and broadcasters. (Comcast in August signed a 10-year retrans agreement with CBS.) But Comcast expects by year end to complete a deal to become majority owner of NBC Universal, a cable network and broadcast TV company that benefits from such revenue streams.

With the NBC Universal deal, Comcast will also get a 32% stake in Hulu, an online video content site that in some ways competes with cable systems by letting users watch TV shows on PCs, TVs, mobile phones and tablets.

When an analyst last December asked Comcast Chief Operating Officer Steve Burke if the combined Comcast/NBC Universal might want to change the free Hulu service by offering a "Hulu Premium," Mr. Burke replied: "That is certainly not in the cards. Nope."