'Manifest,' 'New Amsterdam' aren't haunted by the ghosts of 10 p.m.
READ THIS NEXT
‘I cry for justice in her name’: Oprah honors Breonna Taylor on the cover of her magazine 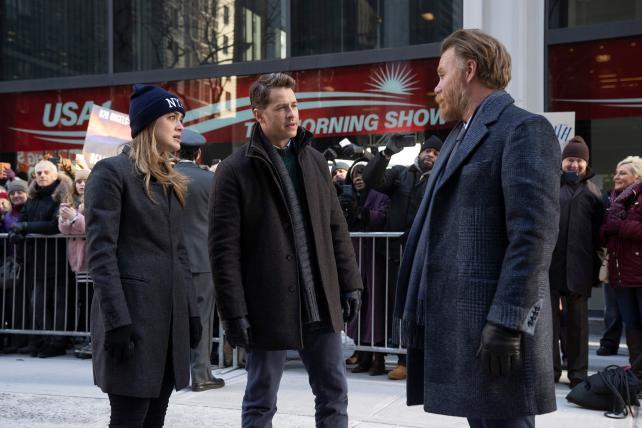 While it's a far cry from the days when "ER" strode the broadcast TV schedule like a colossus, NBC this season has been doing things in the much-maligned 10 p.m. time slot that make it the envy of its network peers.

Through the 23rd of the 35-week 2018-19 broadcast campaign, NBC is leading the pack at 10 from Sunday through Thursday night, generating more commercial ratings impressions (and ad sales dollars) in the hour than do CBS and ABC. In so doing, the network has revitalized the lead-in value of its Monday installment of "The Voice" while laying claim to four of the top five highest-rated dramas in the final hour of primetime.

Leading the way for NBC's 10 p.m. resurgence is the freshman serialized drama "Manifest." Executive produced by Robert Zemeckis, "Manifest" averaged 6.48 million live-same-day viewers and a 1.3 rating in the adults 18-49 demo, bettering the three-network 10 p.m. average (0.8) by 63 percent. Better still, "Manifest" is one of those rare dramas that improves significantly upon the application of commercial ratings; per Nielsen C3 data, the show's first season averaged a 1.9 rating in the currency, which translates to 2.45 million members of the dollar demo.

While "Manifest" has yet to be renewed by NBC, it's difficult to imagine the Peacock deciding to pass on a second season. Not only is it the highest-rated new drama of 2018-19, but in posting those deliveries at 10 p.m., "Manifest" has reaffirmed the lead-in power of "The Voice," retaining 86 percent of the C3 deliveries the competition series served up over the course of their nine shared fall Mondays.

This marks the best retention rate for a Monday NBC drama since "The Blacklist" held onto 89 percent of its "Voice" lead-in back in fall 2013, and is a vast improvement when compared to more recent time slot occupants. (Last season's 10 p.m. dramas "The Brave" and "Good Girls" held onto 45 percent and 48 percent of "The Voice" demos, respectively, while the 2016-17 series "Taken" eked out a 43 percent retention rate.)

To give credit where it's due, ABC first gave advertisers a reason to re-invest in late-prime last season, when its Monday medical drama "The Good Doctor" became the first 10 p.m. series to finish among broadcast's top 10 since "Lost" averaged a stellar 6.0 rating back in 2006-07. "The Good Doctor" closed out its residency with an average draw of 9.77 million viewers and a 2.4 C3 rating, making it the sixth highest-rated scripted series on the dial. Since then, the show's popularity has waned, and a 40 percent decline in its C3 deliveries has made it difficult for "The Good Doctor" to justify its pricey ad rates. According to buyers surveyed last fall, the show is the most expensive 10 p.m. entertainment option, with the average 30-second spot fetching some $155,916 a throw a throw in the upfront.

If "The Good Doctor" this season was underserved by its fall lead-in, it hasn't shown that it has a rally in its bones when paired with a higher-rated Monday night partner. Ratings for ABC's 27th cycle of "Dancing with the Stars" plummeted 36 percent to a 0.9, while "The Bachelor" is currently doubling that output. Despite the huge improvement in the 8-10 p.m. slot, most "Bachelor" enthusiasts aren't sticking around to watch "The Good Doctor," which is retaining only 60 percent of its lead-in.

Incidentally, the last time TV's highest-rated show was one that aired at 10 p.m. was exactly 20 years ago. At the end of the 1999-2000 broadcast season, NBC's "ER" claimed the No. 1 spot on all of television, averaging a gaudy 12.0 in the dollar demo, good for just shy of 15 million adults 18-49. Such a thing could only happen in an era in which only 500,000 households owned a TiVo and the Netflix model was based on mailing physical copies of DVDs to consumers' homes.

Overall viewership of 10 o'clock broadcast shows is down 33 percent vs. the 23rd week of the 2014-15 broadcast season, which marks an aggregate loss of 2.36 million viewers on the hour. Seventy-seven percent of those who still tune in at 10 p.m. have aged beyond the 18-49 demo.

Speaking of older viewers, advertisers who understand that people in their 50s, 60s and (gasp!) beyond actually buy stuff should take a long, hard look at one of TV's best bargains. With an average unit cost of $85,069, CBS's Friday 10 p.m. procedural "Blue Bloods" is a steal, especially when one takes into consideration the show's average delivery of 8.6 million viewers per week. "Blue Bloods" only ekes out an 0.8 among adults 18-49 and a 1.3 in CBS' adults 25-54 demo, but bear in mind that all of the 7 million weekly impressions that are served up to the over-55 crowd are effectively free of charge.

Louder for those in the back: Demos are malarkey.