Think You Need a 3-D Ad? Some Advice From Experts | Ad Age
Skip to main content

Think You Need a 3-D Ad? Some Advice From Experts

NEW YORK (AdAge.com) -- With the New York Times heralding the trend on its front page, new TV models on display at CES, broadcasters announcing distribution and sponsorship deals, and "Avatar"'s record take at the box office piling up steadily, the hype for 3-D is at its climax. But how will marketers fit in? Ad Age tracked down some folks in the know to find out the essentials on 3-D ad production and get those burning questions answered.

Do I really need to start creating 3-D ads?
You do if you're a cinema advertiser who wants to make a visual impact before films such as "Avatar," according to Ed Ulbrich, president of visual-effects powerhouse Digital Domain's commercial division and AICP Digital. "The right brands, with the appropriate disposition, have big opportunities. We're going to first see it in cinema, which is a great, new, immersive world for everybody, because of 3-D," said Mr. Ulbrich, whose firm is working on effects for one of this year's 3-D offerings, "Tron: Legacy."

Pepsi's Super Bowl spot last year (the dancing lizards out of Arnell Group with 3-D from Digital Domain) helped get things started, said AICP CEO Matt Miller -- "2009 was a watershed year; we had around 12 major 3-D releases from the studios, which is why Dreamworks made the big splash with Pepsi." However, he's still bearish on home 3-D. "I think that's premature. I might be proven wrong, but 3-D for right now, and for the foreseeable future while you need glasses, is an event experience, not an everyday experience. Until you can get over that hurdle, which will probably happen in the next decade, three years or 10 years ... it's going to be tough."

So I'm interested in a 3-D ad. Who do I talk to? What agencies or production companies are most advanced when it comes to 3-D?
One thing you'll be quick to find in 3-D production is there are a lot of players with their own proprietary technologies, capture and delivery systems and even glasses. "There are many flavors of 3-D," Mr. Ulbrich said. "You look at 'Avatar' on one end, and at the other end there's an anaglyph [basic 3-D image] with multiple-colored lenses."

Many firms are able to do 3-D production, whether it's shot in 3-D or converted from 2-D in post-production. On the high end, you have companies such as RealD, which worked on "Avatar," "Alice in Wonderland" and "Toy Story," or Prime Focus (which also worked on "Avatar," developing the holographic computer displays).

Ooh, converting my 2-D spot into 3-D sounds like the easiest answer. I can do that?
Sure, but it won't always be the best solution. Bluerock Editor Olivier Wicki worked with 3ality Digital and edited and converted more than 100 hours of 2-D footage into 3-D for the U2 3-D concert film. It took him 18 months on two coasts with two assistants, a second editor and a visual-effects supervisor. "You can derive 3-D from 2-D, downstream, as a post-production technique," Mr. Ulbrich said. "That's do-able, and looks pretty good sometimes [though] that's not how the big movies are done. It all comes down to your content."

Creative is essential to the 3-D decision, said Bob Marks, a longtime 3-D producer who works with Stomp creators Luke Cresswell and Steve McNicholas at Yes/No Productions and worked on 2008's "Wild Ocean" 3-D. "We had to consider from scene to scene how the 3-D was working, how the transitions and cuts worked. Sometimes the 3-D in a shot could be too much. There are certain elements, how you cut from close to wide, [where] you don't want to jar the viewer, you can actually create eye strain." 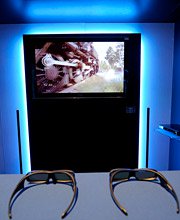 THE FUTURE OF TV? 3-D sets may be coming home sooner than you think.
Meanwhile, expect constraints on how much you can invade the viewer's space, once broadcast gets chugging. "Some people don't push the 3-D that much," Mr. Marks said. "They don't even want for their audience to have one second of discomfort."

OK, so down to business -- how much will a 3-D spot cost?
You'll be able to see what you pay for, according to most experts. While equipment costs might be slight, many additional factors have to be brought in during post-production. An Air Force commercial that's running before "Avatar" is said to have cost more than $1 million to shoot and convert into 3-D in postproduction, with just over a third of the budget going towards the effects and conversion. Screenvision, the cinema-media company, said it charges between $20,000 and $70,000 to convert a 2-D spot.

"There are myriad different cost structures," said Mr. Ulbrich. "I assure you, the 'Avatars' of the world ain't cheap. Advertising produced with those same workflows and technologies ain't cheap either. Will it always be substantially more expensive? No. The technology's changing so fast, there are no standards. There's no right way to get there."