For this week's Trendrr charticle -- a collaboration between

decided to flash back to that distant, hazy time in early September,

before the Labor Day weekend. Specifically, last Wednesday, when

Apple's CEO made all kinds of new-product announcements, including the launch of Ping, its iTunes-based

Twitter -- and so using the spanking new data-analysis tools the

v3, I decided to take a closer look at Apple's rather breathtaking 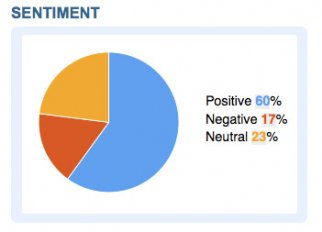 Over the next weeks, by the way, we'll be morphing this charticle,

-- and doing more and more deep dives into the data.

Gender breakdown of those tweeting about Apple.

Wednesday (i.e., those most retweeted) were, predictably, the tech

blogs, including Gizmodo, TechCrunch and Mashable.

those that facilitated live viewing of Steve Jobs' presentation, most

notably Ustream's feed, and those that offered "live-blog" coverage of

the event, most notably live.gizmodo.com.

logic and linguistic analysis to gauge the general mood of tweets

throughout the day at 60%. The 17% negative reading is misleadingly

high; the majority of gripes had to do with problems viewing the live

stream of the event.

collaboration with Wiredset, the New York digital agency behind Trendrr, a social- and

which offers more robust tracking and reporting tools, comes in