David Granger on His Greatest Fear, Paying for Innovation and the Esquire Network So Far | Ad Age
Skip to main content

David Granger on His Greatest Fear, Paying for Innovation and the Esquire Network So Far

David Granger, Ad Age's 2013 Editor of the Year, has spent the last 16 years at the helm of Esquire magazine -- a time of both great upheaval and unprecedented innovation in the magazine business. He helped steer the Hearst title through a deep recession and out the other side, where it's now celebrating not only its 80th anniversary but also its expansion into TV, where NBC Universal has made over a cable network in Esquire's image.

Mr. Granger spoke with Ad Age about the enduring qualities of magazine media, his greatest fear and the precarious topic of one's legacy. Our conversation has been lightly edited.

Advertising Age: At this point, you could probably start resting on your laurels --

David Granger: I don't agree with that, but go ahead.

Ad Age: Why don't you agree with that?

Mr. Granger: The greatest fear in my life is stagnation and doing what's predictable. I've always believed that you have to keep moving and advancing and changing or you die. It just seems so obvious to me that one is never allowed to sit still and be complacent for more than about a week before you start to feel the negative effects of it. We're constantly looking for the next thing, the next way that we can take advantage of what technology offers us to do really good things.

I also get really bored and impatient really easy. So every couple of months I'm getting ready to redesign the magazine. We generally do a redesign at least once a year and we're about to do another one in February. If I'm getting bored with something, either my readers are already bored or they're going to be really soon. So I'm always looking for the next thing.

Ad Age: OK, how do you stay at a job for just 16 years when you get bored easily?

Mr. Granger: Because the challenges keep on coming. In part it's because there are so many more creative opportunities. Let me step back for a minute: I think it took me a really long time -- longer than most editors -- to get remotely competent at this job. For three years and maybe five years I probably remained in this job by the good graces of my boss Cathie Black. Somehow I convinced her not to fire me. Since then it's been taking what I learned about how to make a magazine, or how to make a website or how to make whatever it is and exploring new forms of creative expression.

Every time we come up with something new, it opens up the potential to do something that has never been done before. Our first iPad edition had a cover in which the cover subject spoke to a reader. It was really strange and it looks really primitive now to have Javier Bardem say, "Hello, I am Javier Bardem, welcome to Esquire," but it led to some really cool video things that we did both on the cover and in the magazine that are just funny and enhance the experience. Every time some new form of technological expression comes along I just get excited and I have enough extraordinary people on my staff that we take advantage of it. The business changes every five minutes.

Ad Age: Along the way you've left some digital debris, like perhaps that video of Javier Bardem. How are you able to do this when budgets are so tight? 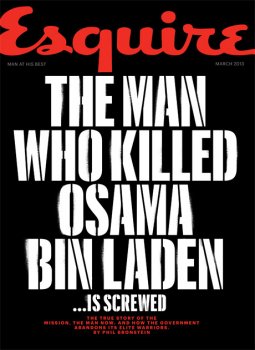 The March all-text cover of Esquire

Mr. Granger: The reason we're able to do that is because we don't spend a huge amount of money on this experimentation. If we're doing video it's usually a very slight add-on to what we're paying for photography anyway. There is some digital debris, but it's experimentation that pays off in enhancing our creative abilities down the line. As long as you don't spend silly amounts of money in order to experiment, as long as you do it on a guerilla basis, we can afford to continue for a long time.

Ad Age: Lots of things have changed since you took over at Esquire. What has endured?

Mr. Granger: Attention span. People want big acts of storytelling and imagination. That has made me feel most gratified: The backbone of magazine-making has endured. When I first took over, everyone was saying no one has any attention span any more.

Mr. Granger: Of course. By the end of the '90s, people were saying the internet was going to be nothing but bits of information. There is that, but there's clearly this longing for more substantial entertainments and I think that has been a thing that has endured most consistently. When we did the story "The Man Who Killed Osama bin Laden… Is Screwed," a 12,000-word story, we could see people on our website spending 45 to 50 minutes on their fricking computer reading it. They were hungry for it. There's a surprising ferocity to substance. Things are of a substantial nature are still valued.

Ad Age: And what about the TV network -- what do you think so far?

Mr. Granger: I think the network aesthetically is well up to Esquire's standards. All the promotional stuff they do, the advertising they do, is beautiful. The four shows they've premiered have been really good looking shows. As the network matures and they get a broader roster of entertainment, I think it's only going to get better. I've been really happy with what's happened so far. Adam Stotsky, the general manager of the network, and I, talk constantly. From the first time we talked on the phone two years ago, he really embraced what Esquire stood for, which is the ambition of men, which is that men want to do good things.

Ad Age: What would you tell someone who wants to go into media today?

Mr. Granger: Creatively this is the best time to be in media. When I got this job I could not say that Esquire could be anything more than a magazine, but we can and we have created charities, we can and we have helped create television shows, we can and we have created books; we're a video production studio half the time. We can indulge every creative impulse. And while I think it's the best time creatively to be in media, I think it's also the most complicated time to be in it on a business basis because there's so much turbulence in how media makes money. It's great on a creative basis, complicated on a business basis.

Ad Age: When you leave Esquire -- whenever that might be -- what do you want your legacy to be?

Mr. Granger: Can you ever think about that while you're doing a job? I'm just trying to make it day to day, issue to issue, month to month, year to year. All I'm trying to do is continue to do really adventurous things that this expansive magazine media allows me to do. I don't think that there's a legacy. I've worked for some good editors in the magazine business and I really believe that six months after you're gone no one really remembers what you did. No matter what I want my legacy to be, I know I'm going to be irrelevant within a few minutes of leaving the building.

Ad Age: I question that.

Mr. Granger: There will be a couple of people who will remember funny stories about me.

Ad Age: But you've been the steward of Esquire during the most unprecedented changes it's had to experience.

Mr. Granger: I guess I've just tried to out in front of the change the media industry is going through, but I don't know about legacy. The things that I'm proudest of at Esquire are not only that we've done some groundbreaking things in storytelling but also in taking advantage of the possibilities of the magazine. I want to feel like Esquire has been a laboratory for the magazine industry.