Making Sense of the Dramatic Purge at the LA Times 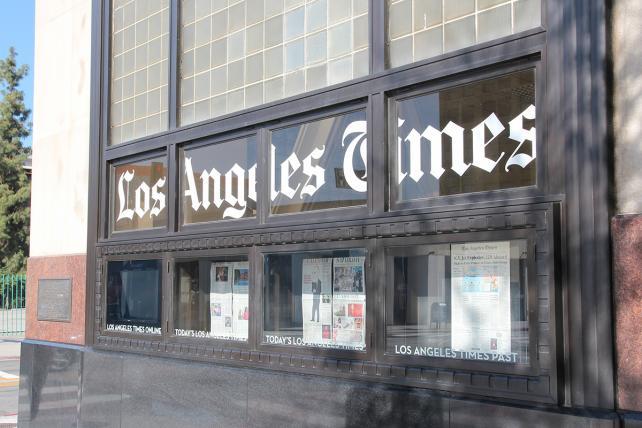 Props to the Los Angeles Times for a story about its internal drama that's as blunt as what just happened: "Ross Levinsohn is named the new publisher and CEO of the L.A. Times as top editors are ousted."

In a dramatic shake-up at the Los Angeles Times, the Chicago-based parent company has installed new leadership ... Ross Levinsohn, 54, a veteran media executive who worked at Fox and served as interim chief of Yahoo, was named publisher and chief executive of the 135-year-old news organization. The move was announced Monday by Justin C. Dearborn, chief executive of Tronc, the parent company of The Times and eight other daily newspapers. Jim Kirk, 52, a veteran Chicago news executive, who was publisher and editor of the Chicago Sun-Times until last week, was named interim executive editor of The Times.

Out the door are Publisher-Editor Davan Maharaj and three of his top newsroom managers: Marc Duvoisin, Megan Garvey and Matt Doig.

Other news outlets are focused less on Levinsohn and more on the purge: "Los Angeles Times fires top editor, shakes up management team" is CNN's spin, while The Times of India hones in on the fate of Maharaj in a story headlined "Prominent Indian-origin journalist ousted as LA Times editor."

At The Street, Ken Doctor offers context in a post titled "Looking Behind Tronc's Surprising Clean Sweep at the L.A. Times":

Coming off poor second-quarter financials -- down 8.6% in overall revenue and 15% in advertising -- Tronc managed to turn in numbers that compared unfavorably even with some of its ever-struggling peers. Its digital revenue results hurt the most for a company renamed last spring on a promised digital transformation: "Total revenues for troncX [the company's digital division] for the second quarter of 2017 were $58.2 million, down 5% from prior-year quarter. Advertising revenues for troncX declined by 9%."

The takeaway: Two lines tucked in the LA Times story pretty much sum up what's happening here: "Levinsohn becomes The Times' 17th publisher and the fifth in the last decade. He has spent more than 20 years in media -- though never in newspapers." In other words, the Times has been rapidly cycling through leadership with inky credentials, but no one's been able to fix the paper's problems -- so now a newspaper-industry virgin gets to try his hand at saving the day.