How to Be a Master of the Digital Domain

Frank Moss, director, MIT Media Lab, was the keynote speaker at MPA's 'Magazines 24/7' digital conference.
Credit:
douggoodman.com
"Think creatively and learn continuously, and in the case of the digital age, I think you need to have a 16-year-old daughter at home," said Frank Moss, director, MIT Media Lab, whose team researches digital media, human-robot interaction and other kinds of Philip K. Dick scenarios with support from 100 corporate sponsors.

Mr. Moss told attendees specifically to keep an eye on the development of electronic ink and e-paper, which has been gaining increasing attention lately. "It's going to have a tremendous impact on digital delivery," he said.

Panels covered topics including capitalizing on enhancing advertisers' results, the aggregation sites that are popping up all over the Web and the ways that video works best on magazine Web sites.

And unlike most big general meetings of the magazine industry, many of the presenters offered up good news. During the panel on making money from mobile technology, for example, Todd Anderman, president, Dennis Digital, said over 1 million wallpaper images from Maxim were downloaded through Sprint alone last year. "I think the business models are all open right now," he said. 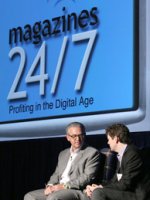 Josh Quittner, editor, 'Business 2.0,' interviews Fred Wilson, partner, Union Square Ventures, about emerging business models for magazines in the digital age at MPA's 'Magazines 24/7' digital conference.
Challenges to come
Publishers have plenty of changes to manage already, of course, but naturally there are more to come. Technology will soon allow magazines to include smart chips that can communicate with readers' cell phones or other wireless devices, Mr. Moss said.

But they may not want to hang too much hope on the idealized "iPod for print," according to Fred Wilson, partner, Union Square Ventures, a venture capital fund. "I don't think anyone should wait for that nirvana device, because it won't necessarily save magazines," he said.

Mr. Wilson added that magazines don't necessarily need a saving grace, but later admitted that his old practice of reading Sports Illustrated was long gone; he said he no longer reads any magazines in print.

"I enjoy engaging with the content," he explained. "I'm an interactive consumer of content. I'm not a passive consumer."