A tale of two Kavanaughs 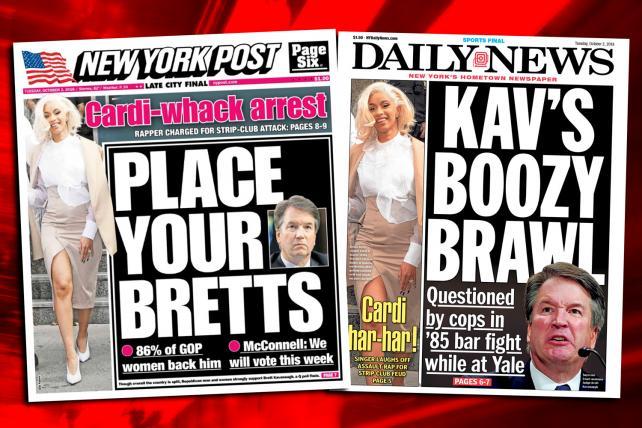 The binary nature of the national discourse about Supreme Court nominee Brett Kavanaugh is starkly rendered in tabloid-newspaper form this morning. Rupert Murdoch's New York Post goes with a punny headline, "Place Your Bretts"—the meaning of which becomes clear when you glance at the bulleted subheads just below: "86% of GOP women back him" and "McConnell: We will vote this week." The paper neatly avoids a specific front-page mention of any of the negative news about Kavanaugh that emerged on Monday (e.g., "Yale classmate to tell FBI of Brett Kavanaugh's 'violent drunken' behavior," per NBC News).

Meanwhile, the Tronc-owned New York Daily News goes with the headline "Kav's Boozy Brawl" and the subhead "Questioned by cops in '85 bar fight while at Yale." And note the paper's photo selection of the judge grimacing in belligerent defiance—a facial expression that he, of course, displayed repeatedly during his U.S. Senate Judiciary Committee testimony last Thursday, and which has turned him into an internet-ready meme.

The New York Post, naturally, offers a more neutral shot of the judge looking a bit cranky, perhaps, but not raging.