Between Heaven and Hell: 'Preacher' Off to a Respectable Start | Ad Age
Skip to main content

Between Heaven and Hell: 'Preacher' Off to a Respectable Start 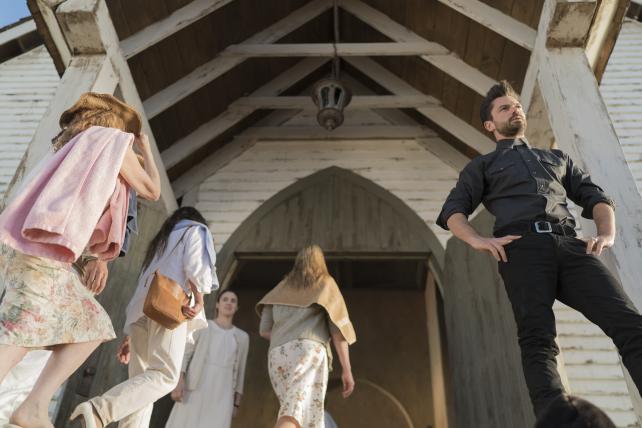 The series premiere of AMC's gonzo comic book adaptation "Preacher" put up respectable numbers on an even-more-chaotic-than-usual Sunday night, logging in as the second highest-rated new cable series of 2016.

According to Nielsen live-plus-same-data, "Preacher" scared up 2.38 million viewers and a 0.9 in AMC's target demo, which translates to 1.14 million adults 18-to-49. Forty-eight percent of those who tuned in for the 90-minute premiere fell into the advertiser-coveted age group.

"Preacher" now ranks as the year's second-biggest cable launch, trailing only FX's "American Crime Story: The People vs OJ Simpson," which on Feb. 2 bowed to 5.11 million viewers and a 2.0 in the demo.

While "Preacher" didn't hang up the gaudy stats delivered by other recent AMC launches -- "Fear the Walking Dead" bowed last August to a staggering 10.1 million viewers and a 4.9 in the demo, while "Into the Badlands" on Nov. 15 drew 6.39 million viewers and a 3.2 rating -- it also faced a formidable Sunday night TV lineup. While the Warriors took a licking in Oklahoma City, losing the third game of the NBA's Western Conference Finals by a 133-105 margin, the TNT telecast still drew a big crowd, averaging 8.02 million viewers and a 3.1 rating among adults 18-to-49. That was on par with a similarly lopsided Game 2 (7.57 million viewers, 3.1 demo), but down a bit when compared to the series opener (8.71 million viewers, 3.7 demo).

AMC gave "Preacher" its biggest possible lead-in, pairing it with the midseason finale of "Fear the Walking Dead." The network's seafaring zombie caper averaged 4.39 million viewers and a 1.9 in the demo, bringing its season two average to 5.01 million live-same-day viewers and a 2.2 rating. While that marks a significant decline compared to "Fear's" gaudy first-season numbers (7.6 million viewers, 3.8 demo), it's worth noting that the show's sophomore run is currently beating out all but four scripted broadcast series ("Empire," "The Big Bang Theory," "The X Files," "Modern Family") in the crucial age range.

If "Preacher" won't join "Better Call Saul," "Fear the Walking Dead" and "Into the Badlands" on the list of cable's all-time biggest launches, it could prove to be a show that builds an audience as it progresses. ("The Walking Dead," which in its sixth season averaged a TV-high 6.3 rating in the C3 currency, premiered in 2010 to relatively modest 5.35 million viewers and a 2.7 in the demo.)

Viewers who were otherwise occupied will have plenty of time to catch up on the "Preacher" premiere, which will repeat this Sunday. (Like many programmers, AMC will elect to sidestep the TV wasteland that is Memorial Day Weekend.) Episode two airs on Sunday, June 5, leading into the series premiere of "Feed the Beast." The David Schwimmer drama shifts to its regular Tuesday night slot that same week.

"I think fans will watch 'Preacher' multiple times," said AMC president and general manager Charlie Collier, in a recent interview with Ad Age. "Just like a good film, you can watch it from different angles, and that takes time." Heading into the 2016-17 upfront bazaar, the series has been a key component of AMC's early discussions with media buyers. (Mr. Collier told GroupM execs that AMC anticipates that "Preacher" will be another "breakout success.")

While live-same-day ratings don't provide a comprehensive view of a show's overall reach, they do tend to align with the final C3 deliveries. As is the case with most scripted series, AMC shows don't see much of a lift in its commercial ratings when time-shifted views are factored into the equation. For example, "The Walking Dead" actually loses about a tenth of a point upon conversion from live-same-day to C3, while "Fear the Walking Dead" ticks up a tenth and "Better Call Saul" gains two-tenths of a point.

Other brands that snapped up inventory in the "Preacher" premiere were Apple, Buick, Hyundai, Taco Bell, Toyota and 2K Games. AMC also set aside time in the opener to promote "The Night Manager," "Feed the Beast" and the upcoming six-part docuseries "Ride with Norman Reedus."