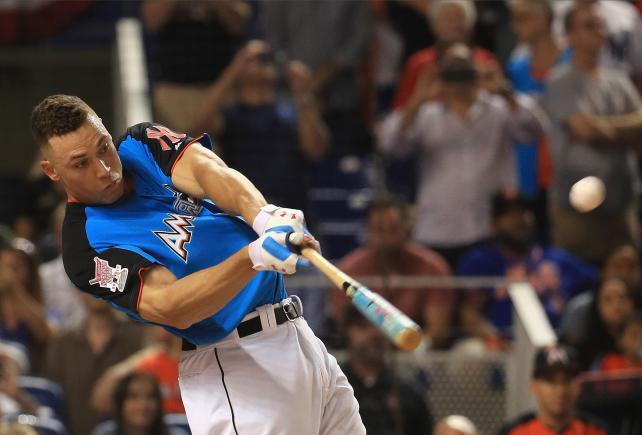 Aaron Judge spent a good chunk of Monday night mashing the yarn out of an awful lot of baseballs, and his eye-popping performance in Miami helped ESPN deliver the biggest Home Run Derby audience in nearly a decade.

In driving no fewer than four balls north of 500 feet (the longest sailed 513 feet to left field, before presumably touching down somewhere in Little Havana), the 6' 7" Yankee slugger put on an unforgettable show for some 8.7 million viewers, making this year's Derby the most-watched since 2008. Per Nielsen, 8.17 million fans tuned in via ESPN, while another 522,000 accessed the event by way of ESPN2, the Spanish-language net ESPN Deportes and via streaming.

Clocking in at a little over two hours, the Home Run Derby drew a 2.9 rating on the flagship network, which translates to 3.53 million adults 25-54, a 41% improvement from the 2.5 million members of the target demo who watched last year's power-hitting exhibition.

The baby-faced Judge's horsehide demolition also contributed to huge uptick in younger male viewers. The Derby served up a 3.7 rating among men age 18 to 49, which works out to 2.34 million males in that particular demo, or more than 2 million north of last year's 1.67 million. Monday's expo also drew 22% more members of the males 12-34 set than the 2016 telecast.

For the second year running, the title sponsor of the Home Run Derby was T-Mobile. The wireless operator, which also has served as an official sponsor of Major League Baseball since 2003, aired four 30-second spots during ESPN's Monday night telecast.

Among the new and upcoming theatrical releases that ran teasers during ESPN's coverage of the Derby were TriStar Pictures's "Baby Driver," Columbia Pictures's "The Dark Tower" and Warner Bros.'s "Dunkirk."

In a first for the Derby, ESPN offered advertisers an opportunity to run creative in what it characterized as a number of "isolated, two-box breaks." The upshot of this particular wrinkle is that around 50% of the screen would remain fixed on the action in Marlins Stadium, while the other half was given over to a standalone ad unit.

While there's no way of telling how tonight's MLB All-Star Game broadcast will fare on Fox, it's worth noting that the overall reach for Monday night's Derby nearly tied last season's Midsummer Classic in total viewers. Fox is hoping the 2017 All-Star Game will bounce back significantly from last season's broadcast, which eked out a record-low 8.71 million viewers and a 5.4 household rating. (By way of comparison, the last 10 All-Star Games averaged 11.8M viewers and a 7.4 household rating.)

The presence of Judge, a viable Triple Crown contender, and National League titans Buster Posey and Bryce Harper, suggest that tonight's game may well be a bigger draw than last year's contest. That said, as this marks the first July exhibition since 2013 in which the outcome will not determine home-field advantage in the World Series, Fox would be best served by a close, high-scoring game.

The most-watched All-Star Game on record was the 1976 installment, which was played just nine days after the country celebrated its Bicentennial. Despite the NL's 7-1 blowout of the AL, some 36.3 million viewers flipped the knob to ABC that night. The game also averaged a staggering 27.1 household rating and a 53 share, which means that just over half of all TVs in use at the time were tuned in to a more or less meaningless ballgame.

In a bid to offer one advertiser a unique opportunity to get its message across, Fox will dedicate an early commercial break to a single sponsor. At the end of the first inning, Fox will air a 60-second promo for the aforementioned "Dunkirk" before throwing to analyst Alex Rodriguez, who'll be on the diamond talking up the National League infielders as they take grounders in advance of the top of the second.

Among the advertisers slated to break new creative in tonight's broadcast are T-Mobile, Coca-Cola, 5-Hour Energy and title sponsor MasterCard.