So what if ABC and CBS sat out the party circuit this year? Freeloader's social calendar was more packed than ever during Upfront Week. We score the New York network parties on a scale of one to 10 shrimp.

The Venue: The Summer Garden at Rockefeller Center

Food and Drink: Fully staffed bar in each of the party's three main corners ensured guests were well taken care of. The food, once you could get to it, was a mix of buffet-style meat-and-potatoes fare and upfront mainstays such as jumbo shrimp and pot stickers.

Crowd Control: Since entry to the "NBC Experience" was staggered, the crowd flow was quite manageable during the first hour or so. It was only after Conan O'Brien's wickedly funny searing of the awkwardly staged Experience (or "the epilepsy hut," as he called it) that elbow room was in short supply. 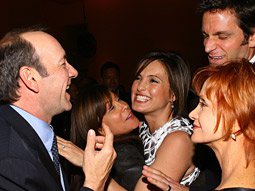 The Venue: Museum of Modern Art

Food and Drink: A centrally located bar with all the top-shelf fixings, plus hors d'oeuvres such as curry-chicken crackers, spicy crab cakes and fruit-flavored lettuce wraps to keep guests nibbling.

Crowd Control: Hollywood agents like to travel in packs, so navigation was a bit tricky in certain spots. And with pilot season under way, it was tough to get a word in edgewise with network execs such as Les Moonves and Lifetime's Andrea Wong, who were getting approached left and right by pitch-happy talent scouts.

Celeb Access: William Morris got some spillover from the NBC party, such as Mariska Hargitay ("Law & Order: SVU") and Kathy Griffin, who spent more time on her BlackBerry than she did schmoozing with agents. Kevin Spacey also seemed to arrive and disappear in a sea of flashbulbs. Some of the celeb cameos were so quick Freeloader had to check Wire Image just to see who else was there. 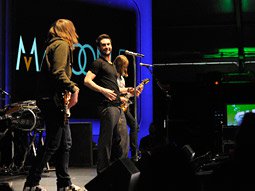 Food and Drink: Trays of green apple martinis greeted guests as they arrived. A well-staffed team of drink servers made sure no one was left empty-handed during a 15-minute concert by Maroon Five or an ill-advised post-cocktail presentation. Even more impressive was the food selection, which included sushi, grilled pork, scallops and a steady stream of desserts.

Crowd Control: The crowd was split between the party tent and the green-carpeted outdoor area, which made for plenty of breathing room and even some space for dancing to the band if the mood struck.

Celeb Access: Younger buyers swarmed what can only be described as the "Gossip Girl"/"90210" Petting Zoo, a vaguely roped-off area that housed the casts of the two hot series. 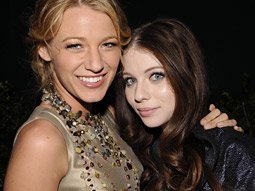 The Venue: The Bowery Hotel

Food and Drink: A trio of specialty drinks, each in its own avant-garde glass, was customized to fit event sponsor Vavoom hair products' "shape" marketing message. Freeloader dug the "Hair-a-cane," a coconut-rum-based cocktail in a glass that looked like the crest of a wave. Snacks such as crab cakes, cheese crackers and cr?me br?l?e also circulated.

Crowd Control: Partiers could be found in three areas: the red carpet, the main party room and the candle-lit roof deck, which kept the crowd flow at a steady speed. As with most parties on the Bowery, though, it got thicker as the night went on.

Celeb Access: Stars from the cast of "Gossip Girl," "30 Rock" and "The Real Housewives of New York City" were within arm's reach, and it was fun to spot some of the more unlikely star-on-star mash-ups, such as Cameron Manheim chatting up "Gossip Girl's" Michelle Trachtenberg, only to be interrupted by a photo-seeking desperate Housewife. Also spotted at the bar: "Crossing Jordan's" Jill Hennessy. 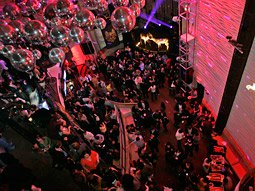 Food and Drink: Since Adult Swim appeals squarely to the 18-to-24 demo, it's only fitting that the party's menu and drinks came frat-boy-approved: 40-ounce cans of Bud Light and Coors were just as popular as the three open bars, as were pizza, burgers, waffles, mac and cheese, and fried chicken.

Crowd Control: With three floors, two mini karaoke studios, a roof deck and a piano bar to house all the young buyers, it was relatively easy to maneuver and even secure a prime spot for the Kanye West concert. By the time the rapper went onstage at midnight, an hour after he was originally scheduled, the best exit strategy was to stay put until the end.

Celeb Access: Kanye gave the crowd a typically energetic, interactive set, even taking to the crowd for a whole song and dancing with fans on couches. Hip-hop stars Rihanna and Chris Brown were spotted taking in the closing performance of "Stronger." They did not, however, join Kanye onstage for a surprise triple-threat duet. 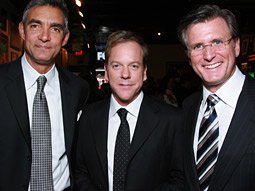 Food and Drink: Fox can always be counted on to have the largest food selection at its Central Park after-party, and this year was no exception. Whether your cravings veered toward burgers, sushi or Brazilian barbeque, Fox had you covered. Several specialty cocktails all veered toward the super sweet.

Crowd Control: The setup was so vast, comprising two party-tent rooms and two outdoor patios, you had to circle the place at least three times just to see who was there.

Celeb Access: As in years past, Fox did a commendable job of rotating its talent at different photo stations. The casts of "Bones," "24," "House," "'Til Death," "America's Most Wanted" and the new "Do Not Disturb" were all available. Even the notorious Kiefer Sutherland seemed relatively subdued and happy to be there. Of course, there were no Christmas trees for him to jump into.