Addressable TV Ads Might -- Finally -- Be Ready for Prime Time

If you watch TV, chances are you've come upon Mayhem, the devil-may-care character who is seemingly everywhere in commercials for Allstate. But in one new instance, the character will be decidedly less mass market, appearing to talk to only a select few -- by Allstate's choice.

The No. 2 insurer has launched a new effort for renter's insurance, which will reach TV viewers who rent, rather than own, their homes. The ads, beamed on a highly targeted basis by Dish Network and DirecTV, mark the first time Allstate has used TV to advertise renter's insurance products but also signal that addressable TV-advertising technology, long ballyhooed but seldom used, is starting to gain momentum. 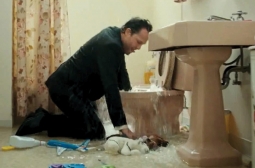 Allstate's Mayhem character will only appear to a select few.

Using addressable ads, marketers can predetermine the type of consumer who will see their commercials. In this case, Allstate is taking consumer data widely available from firms such as Experian, Epsilon and Axicom, along with subscriber information from Dish and DirecTV, and using all this to pinpoint renters. In other words, if the subscriber is a homeowner, the commercial is not supposed to appear on the TV screen. By using both DirecTV and Dish, Allstate's new-technology commercials will reach about 15 million households.

The campaign is a twist on advertisers' previous efforts in this arena.

"It's an exciting moment in history," said Tracey Scheppach, exec VP-innovations at Publicis Groupe 's SMGX, which helped Allstate place the advertising and navigate the talks with both media outlets. "This is the first time we've been able to go live on two platforms at once with the same campaign." The commercials appear during an allotment of ad time controlled directly by Dish or DirecTV. Viewers who don't qualify for the ads typically see direct-response pitches.

Running an addressable ad across more than one video provider is somewhat of a coup. While addressable TV technology has been around for years, efforts to get marketers to use it have moved more slowly than the flow of Heinz ketchup in one of that company's famous "Anticipation" spots.

That's because the technology involved in running the ads and monitoring their performance can vary by multichannel provider, making it difficult to deliver an addressable ad across multiple providers, from Comcast to Dish or DirecTV, and end up with a targeted national campaign at a reasonable price.

But the technology is of great interest to marketers of all stripes who would prefer that their ads be more relevant to the legions of TV viewers. "The message will resonate if there's a product that speaks to you," said Nancy Ryan, media director for Allstate. "I'd rather it not fall on deaf ears" with some part of the audience responding, "I'm not a renter. Why should I care about that ?"

In theory, the existence of addressable advertising should help the TV business. Some believe that because addressable ads target a specific type of consumer -- and theoretically are of greater interest to those who see them -- the networks could charge a premium for them. Ms. Scheppach, for one, thinks advertisers using direct mail, which allows for targeting specific consumers by address and other variables, might transfer funds from that purpose to TV spots if addressable advertising became more widely available.

"This is a new opportunity for TV to grow the pot of money," she said, envisioning a day when retailers who rely heavily on catalogs and mailers will instead test their hand at addressable advertising.

But it's been slow going, despite some research suggesting future opportunities. In 2010, Comcast and two clients of Starcom MediaVest Group conducted a test in Baltimore in which different ads were sent to specific groups of households, based on demographic data and an advertiser's desired audience. The parties determined that viewers who see advertising directed at a specific set of households were 32% less likely to change channels during the ad break.

"I can see more deployment coming. This type of ad is going to come to scale," said Ms. Scheppach, who acknowledges that reaching the larger part of the estimated 114 million households with TV services subscriptions could take several years. "It's a matter of how long does it take."