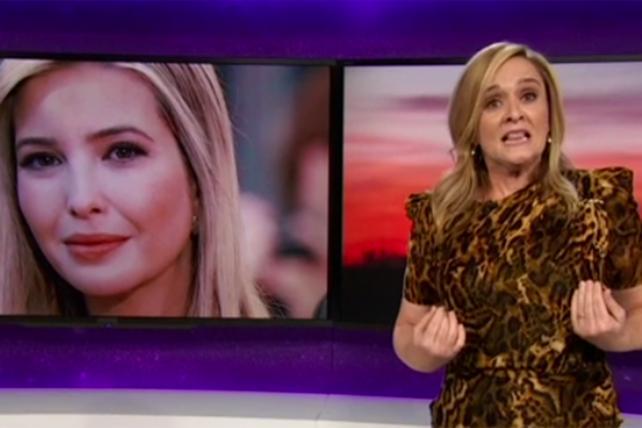 State Farm's defection from Samantha Bee is a bigger deal than Autotrader's, but advertiser boycotts typically don't deliver much pain in any event.
Credit: Full Frontal with Samantha Bee

Autotrader.com said this week that it would stop buying inventory in TBS's "Full Frontal with Samantha Bee," but data from an ad-tracking service suggests that the rift will have little or no discernible impact on the fortunes of the show or its network.

Autotrader's public avowal to "suspend our sponsorship of 'Full Frontal with Samantha Bee'" in the wake of the titular host's profane tirade against Ivanka Trump appears to overlook the fact that the online car bazaar hasn't advertised in the show in nearly two-and-a-half years.

According to iSpot.tv data, the first—and last—time Autotrader bought national ad time in Bee's show was 28 months ago. A 30-second Autotrader spot appeared in the 11:30 EST encore telecast of the Feb. 8, 2016, series premiere, which had been simulcast across Turner's four entertainment networks the hour before. Since then, Autotrader has yet to make a return appearance to "Full Frontal," although the company is a familiar presence for viewers of TBS's midday telecasts of off-net acquisitions like "Friends" and "Bob's Burgers," as well as in its movie titles.

An Autotrader rep on Friday confirmed that the company's statement referred to an existing digital advertising deal with the show that it discontinued in the wake of Bee's incendiary comments. Autotrader is not suspending its advertising across TBS as a whole.

If TBS isn't exactly sweating out the Autotrader announcement, the departure of State Farm from the "Full Frontal" roster may have a somewhat more immediate impact. State Farm has aired 14 units in the show this season, of which three appeared in first-run episodes. According to iSpot, the insurance company has bought 108 units in "Full Frontal" since the show premiered, including 25 spots that aired in first-run episodes and 83 spots that ran in less-expensive encore telecasts.

"We have asked TBS to suspend our advertising in the program and are reviewing any future placements," State Farm said in a statement released Thursday. "We constantly review programs to ensure alignment to our programming guidelines and brand values."

But advertiser boycotts are generally ineffective, inasmuch as they don't tend to have much of an impact on the targeted network's bottom line. Brands that walk away from a show typically just re-allocate their money elsewhere on the same network.

For example, IBM was one of many advertisers that pulled out of "The Ingraham Angle" in March and April, but Fox News Channel remains one of the company's top 10 TV targets. In lieu of advertising in the network's prime-time opinion block, IBM has focused on morning news programs ("America's Newsroom") and shows that air in TV's so-called fringe ("Special Report with Bret Baier" at 6 p.m.) and late-night ("Fox News at Night with Shannon Bream"). Meanwhile, Ingraham's show is not only still very much on the air, but it's now the No. 1 cable news program in its time slot.

Even if other big-spending brands are hounded into dropping Bee's show, if history is any guide they'll quietly shift their units to TBS properties like "Conan," "The Last OG" and the aforementioned syndicated comedies.

But as ill-advised as Bee's remarks were, it's not as if the comedian hasn't spent the last few years waving a giant neon "Caveat Emptor" sign at prospective and returning advertisers.

Speaking during Turner's 2017 upfront presentation, Bee prefaced a particularly racy bit about the killjoys at the company's Standards and Practices department by pausing to thank "all of our precious and attractive advertisers for their patience and intestinal fortitude." From there she launched into a series of meta-references about pachyderm vaginas, although that's not exactly the phrasing she deployed.

"I'm almost positive I'm the first person to stand on a stage at an upfront and say 'elephant twat.' You are welcome," Bee joked. She went on to note that she and her staff looked forward to working with advertisers in Season 3 before acknowledging that while the "Full Frontal" team is "irritating and high-maintenance," they are also "flexible and adhere to the laws in many of the 50 states."

Bee's use of that particular monosyllabic epithet was not obscured in any way during the year-ago upfront presentation, but her subsequent deployment of tu-sais-quoi against the president's daughter was very much bleeped out during the TBS telecast. Then again, given the speed with which the segment made the rounds of the internet, it's likely that the 801,000 people who saw the relatively innocuous TV version were far outnumbered by those who watched the unexpurgated clip.

This was not the first time Bee used the word-that-shan't-be-uttered on her show. Inspired by a vulgar nickname that had been bestowed on her by an anonymous online correspondent, the "Full Frontal" host wrapped up a December 2016 telecast by naming CNN anchor Jake Tapper the Thunder C… um, just click here. (A year later, Bee used the Ad Council's annual public service awards dinner as a platform to ask Turner brass to allow her to reinstate the word. "Please give me the C-word back," she cracked. "I promise to use it responsibly.")

As much as TBS is unlikely to extract a pound of flesh from Bee for her Ivanka remarks, "Full Frontal" is hardly an untouchable property. (And if we've learned noting from the ongoing "Roseanne" saga, perhaps nothing is.) Since the third season began on Feb. 7, "Full Frontal" is averaging a little south of 968,000 viewers, of whom 411,000 are members of the important adults 18-to-49 demo. That marks a 30 percent year-over-year decline in overall viewers and nearly a 35 percent drop in the demo.

The year-to-year comps for "Full Frontal" are hampered by the ratings boost the show enjoyed after the inauguration. For a two-month stretch following President Trump's swearing-in, the show began posting the highest ratings of its run thus far, averaging some 1.44 million viewers, of whom nearly half were adults 18 to 49.

Naturally, the controversy over Bee's remarks likely will help the show's ratings rebound, at least in the near term. And while that's not to say that the whole incident was designed to get people talking about "Full Frontal" again, history teaches us that a little agita can go a long way toward scaring up a crowd.

Case in point: Way back in 1989, a Michigan housewife kickstarted a letter-writing campaign demanding that mega-advertisers like Procter & Gamble, Coca-Cola and McDonald's sever all ties with Fox's "Married… With Children." The evening newscasts and the dailies reported on every aspect of the boycott imaginable, which in turn drove hundreds of thousands of curiosity seekers to sample the show. You can imagine what happened next: The newcomers sent the ratings soaring, whereupon the advertisers all rushed back to take full advantage of all those bonus impressions.

"Married… With Children" went on to air for another eight seasons.