Visa vs. MasterCard: Who's on the Money?

Optimedia's Antony Young Analyzes the Credit Card Companies' Media Strategies
READ THIS NEXT
Disney's NHL deal scores big with advertisers
Black Friday and Cyber Monday signaled the start of the all-important holiday retail season. Across the board, retailers, manufacturers, Wall Street analysts and politicians alike waited in anticipation for any sign of a pickup in consumer spending. So did the credit and debit card companies that have a vested interest in shoppers and their willingness to charge their purchase transactions.

Visa and MasterCard, the two leading card brands affected by the falloff in consumer spending, reduced advertising budgets in the first half significantly. But both have come back with solid spending in the third and fourth quarters.

The credit-card companies were presented with some challenges in 2009. First and foremost, the risk that their advertising is seen as encouraging reckless spending or increasing consumer debt; and secondly, being closely associated with the financial institutions seen as responsible for much the economy's woes. So how did they handle their media campaigns while driving their business?

Both brands made significant changes to their approach to advertising.

"More people go with Visa"
Visa's major marketing change in 2009 was a branding revamp. After three years of "Life takes Visa," it introduced the word "Go" in a new global tagline -- "More people go with Visa." Rather than encourage charging up big aspirational purchases, the creative messaging was not about spending more, but about using Visa for those things that are important to you every day. One of its launch TV spots in early March asked, "When was the last time you went to the aquarium with your daughter on a Tuesday?" A hallmark of Visa's marketing effort is significant sponsorships behind the Olympics, FIFA, NFL, Kentucky Derby, Nascar and MLS. It ran Olympic-related advertising and promotions leading up to the Vancouver Winter Games.

'Priceless' pushes on
The "Priceless" campaign has been synonymous with MasterCard for the past 12 years. Unlike Visa, which overhauled its branding this year, MasterCard adapted its "Priceless" messaging to focus on consumer sensibility and responsibility amidst tough times. This spring's "Jeans" campaign featured footage of icons Marlon Brando and Marilyn Monroe, among others, ending with the line: "The perfect pair of jeans -- Priceless." For the holiday season, MasterCard launched ads featuring Peyton Manning and Alyson Hannigan to promote MasterCard's "Priceless Gift Finder" application.

For the first nine months of this year, Visa placed $129 million in network and cable TV, or about 58% of its media budget. Sixty percent of its network spend was on Fox, launching its "Go" campaign with two national spots in "American Idol" and a healthy placement around the NFL game schedule. It promoted Visa Check and Visa Debit with specific spots as well as sweepstake promotions for chances to win trips to the Winter Olympics and the Super Bowl, all consistently around the "Go" theme. I quite liked Visa's buy on NBC.com, where it sponsored streaming episodes of "Friday Night Lights" and "The Office" without commercials but with a "Go Commerical-Free" tag on the landing page leading into the episode plays.

MasterCard spent just over $100 million, nearly two-thirds of its budget, with a combination of network, cable, spot and syndication. MasterCard spread its network buy evenly across the four networks, placing a strong schedule on drama and over 30% in sports programming, notably golf and football.

Visa placed a 22% of its budget into magazines through a variety of general interest titles. Consistently promoting its "Go with Visa" platform, it customized its placements and products by title (see below). MasterCard ran an artistic print campaign very much as a support for its business-to-business, World MasterCard and "Jeans" campaigns in titles such as People, Wired and Entrepreneur.

Both card companies stepped up their use of online. Year-to-date, Visa spent 15% on its paid media budget in online, up from just 3.5% the year prior. MasterCard allocated just over 17% versus 4.4% in 2008. This spending estimate excludes budgets for search, social media and specific site production, illustrating just how much it is investing in digital.

Visa ran an excellent rich-media banner campaign emphasizing its "More people go with Visa" tagline. One execution provided live video feeds of people "going" places in Time Square in New York or equivalent views in Buenos Aires, Prague and Ho Chi Min City, and users could flip between cities and even select camera angles within the banner. Another Visa banner used Google Maps functionality and partner sites such as Daily Candy or Fandango to recommend purchases based on user preference and time of day.

Visa also launched a microsite Visa.com/go that invited consumers to submit pictures and provide recommendations about different experiences to try, along with offers from various merchants. It is now running both its Olympics and holiday promotions. 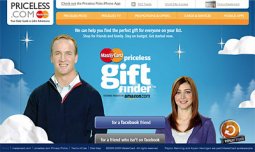 MasterCard provides an excellent destination on its priceless.com site, providing great consumer-facing applications that support the brand proposition. This includes the MasterCard Gift Finder, Priceless Pointers -- tools and tips for better handling credit and finances -- and Priceless Picks apps. All have applications that integrate into social media or mobile applications, which have been promoted in other media. The MasterCard Gift Finder is tied up with a gift-buying application linked to Amazon.com that helps select gifts based on a personalized profile ... although I was immediately suspicious of the algorithm when it recommended I purchase a Kindle!

Visa ran a program on YouTube sponsoring the click-to-buy option of MP3 tracks from music videos. It also ran a superb promotion on Flickr, inviting people to submit images with recommendations from them about experiences that their Visa card enabled.

Supporting its Olympics sponsorship, Visa created a number of athlete video profiles that were accessible on its website, sending users to a sponsored page on YouTube with the option to download a widget for users' social-networking sites. Great content, but, disappointingly, a very low number of views and downloads to date, which hardly seem to make it worth the effort. An example of how uploading videos on YouTube alone is not a media plan.

MasterCard "Priceless Gift Finder" extends onto Facebook, where a user can build shopping lists from their lists of Facebook friends.

MasterCard this year launched a specific effort to reach Hispanic consumers, a segment with undoubtedly increased buying power that shows a preference for using cash over plastic. MasterCard debuted its 30-second Spanish-language "Priceless" spot -- "Quebradita" -- which focused on how consumers can better manage money by using debit and prepaid cards. The spots aired in 11 major U.S. Hispanic markets. In addition to TV, MasterCard used Spanish-language radio, online and out-of-home advertising. MasterCard also formed a partnership with the Hispanic Heritage Foundation and Univision that draws upon its on-air talent in the creation of a financial education series. Finally, MasterCard took "Quebradita" to the streets -- literally -- by promoting financial literacy at kiosks within cash-driven businesses, including check-cashing centers and laundromats.

Visa, a past advertiser in Hispanic media during 2007 and 2008, did not record any advertising in Spanish-language media.

MasterCard supported its business programs with print advertising in magazines and online.

Visa was one of the first brands to buy interactive, rich-media ads on the NY Times iPhone application reader. The expandable "interstitial" ad units encourage users to interact with the brands by taking advantage of functionalities such as tilting, which is unique to the iPhone, as well as providing special merchant offers. 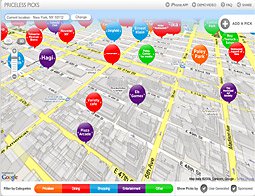 MasterCard launched its Priceless Picks app, which recognizes your location and presents a 3-D map of various priceless picks of restaurants, bars, museums and popular items on sale. Another handy app is the ATM Hunter, which allows you to search for ATMs near your current location, sorting by preferences such as drive-thru and no service charge.

Both marketers demonstrated a high level of creativity and deft in their media programs. To me, however, Visa stood out in several areas. It delivered an incredibly integrated communication effort centrally around the "More people go with Visa" platform. This idea transgressed beautifully across all media -- TV, digital, promotions, B2B and sponsorships. Each channel cleverly exploited the individual attributes of the medium, to express the "Go" platform idea. It supported its debit and check products more prominently, which was an area of growth this year. Visa also showed a lot of enterprise in the use of emerging tools such as social media and online video. I feel that Visa's media strategy benefited more from a new brand campaign vs. MasterCard's support for a long-standing brand campaign. "Priceless" is one of the best and most enduring campaigns of the past two decades, and this perhaps explained why MasterCard seemed to struggle to bring new ideas from a media perspective. It did, however, make some deliberate choices to focus its budget on TV and the Hispanic market, which could very well pay dividends going forward.