One for the Ages: Cubs-Tribe Thriller Is Most-Watched MLB Game in 25 Years | Ad Age
Skip to main content
Sign In Register

One for the Ages: Cubs-Tribe Thriller Is Most-Watched MLB Game in 25 Years

READ THIS NEXT
Beyond MyPillow: the other biggest brand advertisers on Fox News revealed 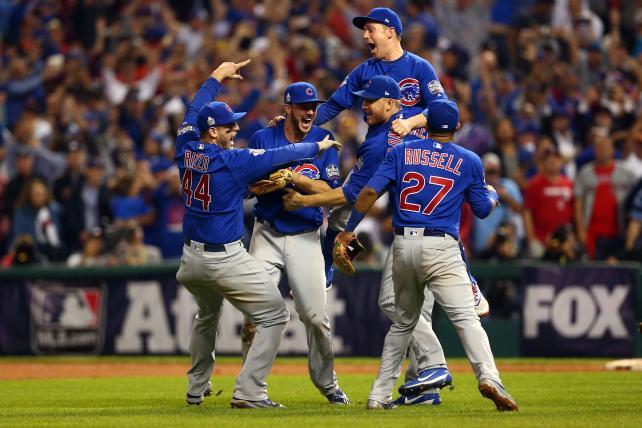 The Chicago Cubs celebrate defeating the Cleveland Indians in Game 7 of the 2016 World Series at Progressive Field on Wednesday, Nov. 2, 2016, in Cleveland.
Credit: Rob Tringali/MLB Photos via Getty Images

In what may very well go down in the books as the single greatest Game 7 in World Series history, the Chicago Cubs on Wednesday night exorcised a 108-year-old demon in front of the largest national TV audience to tune in to a baseball game in 25 years.

According to Nielsen live-plus-same-day data, the Cubs' 8-7 extra-inning victory over the Cleveland Indians averaged 40.045 million viewers, eclipsing Fox's previous record, which was set by the seventh game of the indelible Diamondbacks-Yankees Fall Classic in 2001. The clincher, which unfolded in a city still reeling from the terror attacks of Sept. 11, delivered 39.1 million viewers.

The heart-pounding finish to the 2016 MLB campaign also averaged a staggering 21.8 household rating, making it the highest-rated World Series broadcast since the aforementioned Arizona-New York game drew a 23.5 rating. By comparison, only four NFL playoff games and Super Bowl 50 delivered a higher rating than Game 7 of the Cubs-Indians showcase.

Stat-obsessed baseball fans would have to go back all the way to fall of 1991 to dig up a World Series broadcast that put up bigger numbers than last night's wild and woolly ballgame. Game 7 of the instant classic that was the Twins-Braves series on CBS averaged 50.3 million viewers, topping the sixth frame's deliveries by a margin of 9.51 million.

Over the course of the four-hour-and-fifteen-minute broadcast, Fox averaged a 12.6 rating in its target demo, which works out to 16.2 million adults 18-49. The two most recent Game 7 showdowns didn't come anywhere near to putting up the sort of numbers that were notched by Wednesday night's thriller, as the conclusion of the 2014 Giants-Royals series drew 23.5 million total viewers and a 6.6 in the demo, while the rather anticlimactic finish to the 2011 Rangers-Cardinals duel averaged 25.4 million viewers and a 7.4 among the 18-49 set.

For the sake of comparison with the most recent World Series, the five-game average for the 2015 Royals-Mets matchup played out with 14.5 million viewers, an 8.6 household rating and a 4.0 18-49 rating. Thus, this year's series was up 57% in total viewers, +50% in the household rating and +63% in the demo.

To put the Game 7 deliveries in perspective, the Cubs-Tribe finale all but assuredly will prove to be one of the top 10 most-watched broadcasts of the calendar year and the 2016-17 season. The NBA Finals won't lay a glove on it (the seventh frame of the equally improbable Cavs-Warriors set averaged 31 million viewers and a 15.8 household rating), nor will the Academy Awards, which hasn't topped the 40 million mark since 2013. Game 7 also out-produced each of the 17 nights of NBC's London Summer Olympics coverage, and easily surpassed the turnout for the year's biggest scripted broadcast, a Jan. 5 "NCIS"-"NCIS: New Orleans" crossover episode that drew 19 million viewers to CBS.

If historical precedent is any indication, only the Super Bowl, the NFC and AFC Championship Games and perhaps as many as three of the NFL Divisional Round Playoff broadcasts are guaranteed a more colossal audience than Wednesday night's nail-biter. (How the early rounds fare will depend greatly on the participation of the Dallas Cowboys, which are such a huge national draw that even their 2014 Wild Card game against the low-profile Detroit Lions delivered 42.3 million viewers.)

All told, the Cubs-Indians slate averaged 22.9 million viewers over the course of the seven broadcasts, making it the most-watched World Series since the Boston Red Sox expunged their own longstanding "curse" back in 2004. Boston's four-game sweep of the St. Louis Cardinals averaged 25.4 million viewers. The series also averaged a 12.9 household rating, the highest since the Sox and Cards scared up a 15.8 during their foreshortened conflict.

Lastly, while it would be foolhardy to draw any wide-ranging conclusions about the future of baseball's TV ratings based on the confluence of 176 years of thwarted destinies, the Fall Classic may be enjoying something of a youth movement. The Fox audience has aged down in each of the last two years, and with a median age of 53.6 years, the Cubs-Tribe series was a full year sprightlier than the Mets-Royals set. Moreover, this year's series ties the 2012 edition as the youngest-skewing MLB title tilt in five seasons.

Among the advertisers that reaped the benefits of Wednesday night's massive turnout were pre-game sponsor Lincoln Motor Co. and first-time official presenting sponsor T-Mobile, as well as familiar faces like Taco Bell, Sprint, State Farm, Budweiser, Jeep, Lexus, Geico, Verizon, Coors, Gillette and Ford. Movie studios were represented by the likes of Paramount Pictures ("Arrival"), Lionsgate ("Hacksaw Ridge"), Warner Bros. ("Fantastic Beasts and Where to Find Them"), Marvel ("Doctor Strange"), Twentieth Century Fox ("Why Him?") and DreamWorks ("Trolls"). The two presidential candidates also got in on the fun, with Hillary Clinton's campaign investing in a pair of national spots and Donald Trump's camp snatching up a late 30-second unit.

Perhaps no brand got more bang for its sponsorship buck than Chevrolet, which after the game tossed Series MVP Ben Zobrist the keys to a limited-edition 2017 Camaro 2SS convertible. The 35-year-old switch hitter, who plated the winning run in the top of the tenth inning, seemed genuinely thrilled to take ownership of the car, saying that he was looking forward to taking his teammates for a spin in his new ride. "Wow! Thank you, thank you!" Zobrist enthused. "Look at that thing!"

Fox cameras later spied Cubs superfan and Windy City favorite son Bill Murray reaching into the Camaro's interior in order to honk the horn. The actor, who was a ubiquitous throughout the Cubs' postseason run, would go on to commandeer a Fox Sports mic in order to interview Chicago President of Baseball Operations Theo Epstein in the clubhouse. (While the segment was basically just an excuse for the two men to douse each other in Mumm Napa Brut Prestige sparkling wine, the vintner didn't take to social media to squeeze out any additional social juice from the encounter.)

The World Series is just the first of several high-end sporting events on the Fox broadcast calendar, a roster that includes the Jan. 22 NFC Championship Game and Super Bowl LI on Feb. 5. In summer 2018, the network will host its first FIFA Men's World Cup.