Ahead of Tokyo Olympics, NBC brings athletes together for a day of storytelling | Ad Age
Skip to main content

Ahead of Tokyo Olympics, NBC brings athletes together for a day of storytelling 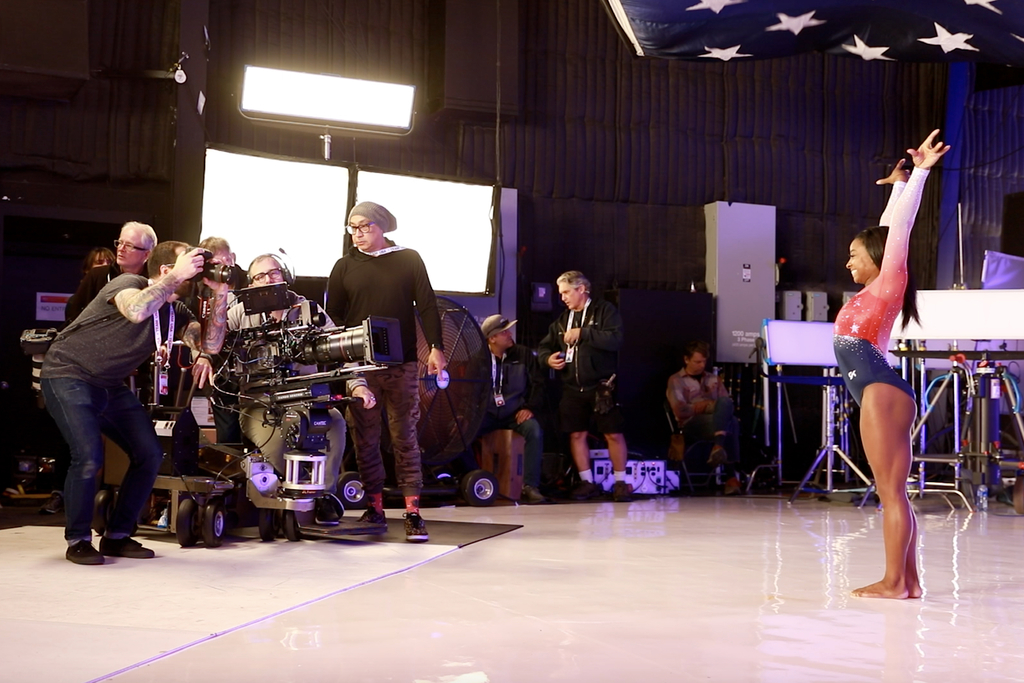 On July 24, 2020, more than 15,000 athletes from around the world will convene in Tokyo to compete in the XXXII Olympic Summer Games. But the week before Thanksgiving, eight months before the Games commence and 5,400 miles away across the Pacific Ocean, 110 American Olympic and Paralympic hopefuls converged in Los Angeles—not for training, but to tell their stories in a West Hollywood studio.

The United States Olympic and Paralympic Committee (USOPC) and NBC Universal, U.S. broadcaster of the games, have invited the most promising talents to partake in what they’ve dubbed “WeHo,” what they describe as the “largest content capture in the history of media.”

Over five days in 16 studios, athletes posed for photos and told their stories on camera and in podcasts to create a massive content collection to promote the Olympics across dozens of platforms and properties. The output will appear on news networks including CNBC, on “Today” and “The Voice,” print magazines, promotions for films and theme parks and on various social channels from Instagram to TikTok. The aim is to keep awareness high for the Olympics before, during and even after the games, which promises to be 2020’s biggest media event, running on prime time TV for 17 straight nights.

“The Olympics is part of the DNA of Comcast/NBC Universal,” says NBC Sports CMO Jenny Storms on a tour of the WeHo space. The Olympics have been exclusively broadcast in the U.S. on NBC and NBCUniversal networks since 1988 for the Summer Olympics, and since 2002 for the Winter Games.

“For us, it’s not an event that’s every two years," Storms says. "It’s 365 days a year, every year, so being able to get a lot of content at once helps ensure we are bringing that Olympic message to life every single day to the consumer.” 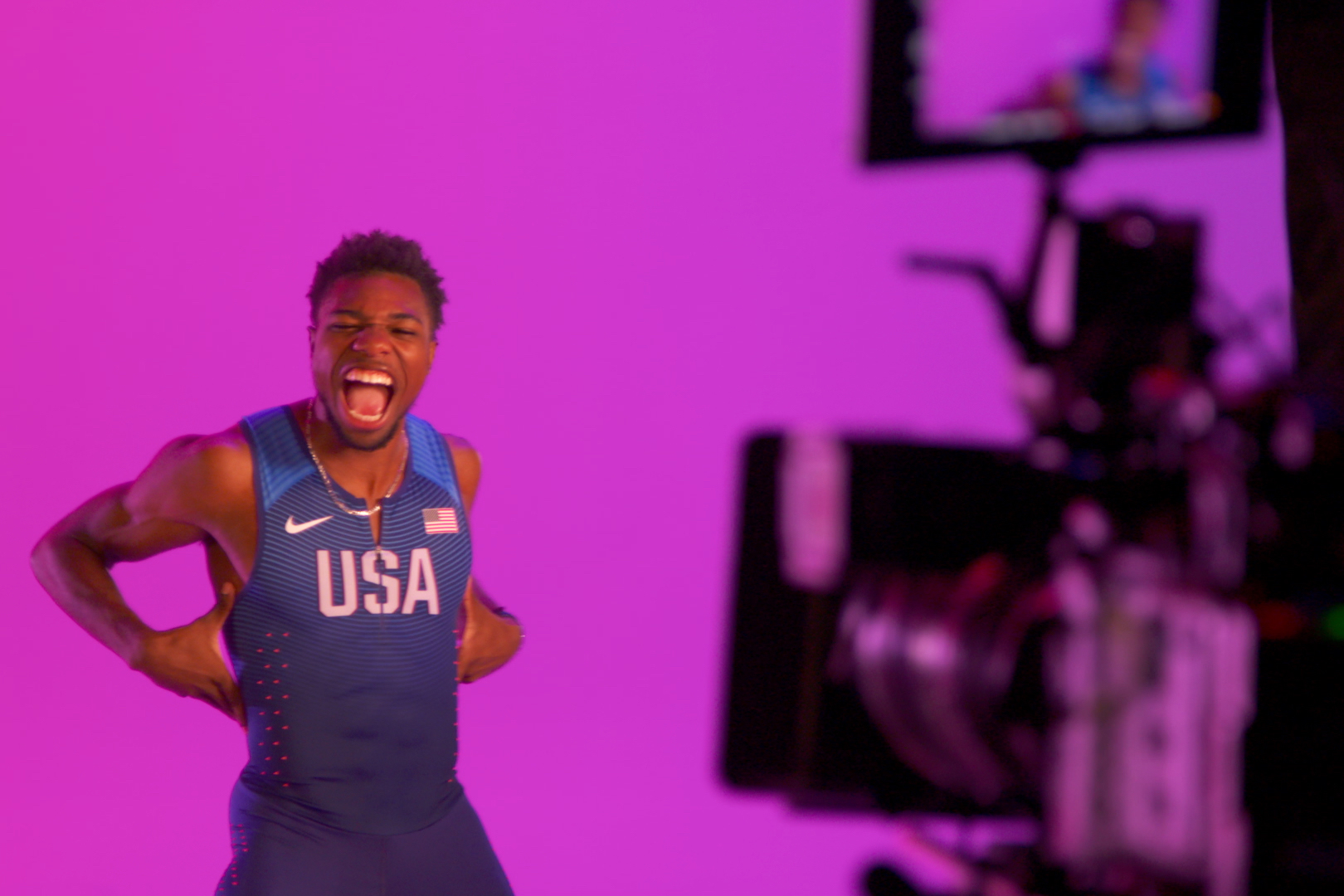 The WeHo event, short for "West Hollywood," has become crucial as media channels—and consumer desire for that content—have proliferated. The program started in 2007, with 74 athletes on a circuit of 11 stages. But Twitter was born just the year prior, while both Instagram and Snapchat didn’t even exist, let alone TikTok.

“The more specialized and personalized new platforms become, it really makes this content capture that much more important,” says Storms.

“We’re very specific to what content we shoot for what channel based on our audience and our athletes,” adds Brian Gordon, USOPC senior VP for marketing and media, who addressed WeHo tour attendees over speakerphone. “That includes even new channels. We spent a month and a half preparing for a TikTok soft launch that happened a couple of weeks ago, and we’re using WeHo as a beta test to see what’s working or not moving forward.” 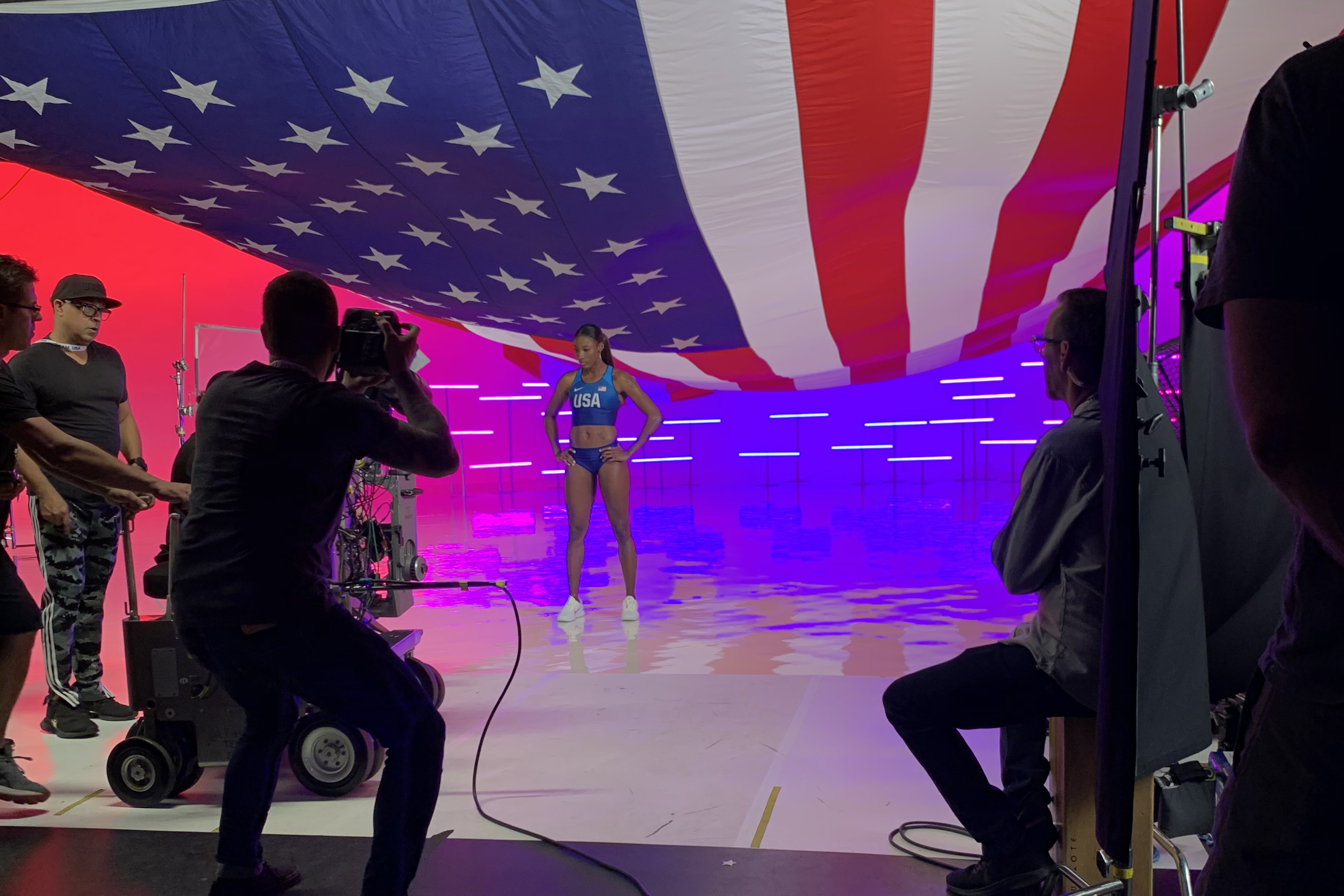 The athletes begin at Stage One, the largest, with an enormous 30-by-50 foot American flag above a backdrop of shifting red, white and blue lights. “I think one of the things that’s so critical with regard to the Olympics is the Americana, Team USA, and how this isn’t about red and blue, it’s about red, white and blue,” says Storms.

Visitors got a glimpse of track and field athletes Rai Benjamin and Nia Ali both posing on Stage One, muscles flexed and assuming curious stances, arms grasping something invisible, at the request of the director. These images will be integrated into scenes featuring the athletes surrounded by lively, dynamic typography, featuring phrases like “Electric,” “Boom,” or “I’m gonna get it.”  At a station in the wings, photography and text are integrated in real time, so the production team can get a sense of what poses the athletes should take.

Through the hall and around a corner we find a stage dedicated to social content. Outside in open pens romp puppies, which the athletes are invited to cuddle for a program called “Interviews with Puppies.” Inside sits six-time Olympics gold medalist track and field star Allyson Felix, one of the most promising contenders for 2020. The outspoken athlete grabbed headlines in May after she wrote an op-ed in the New York Times, revealing that her former sponsor Nike wanted to pay her 70 percent less after she gave birth to her daughter, Camryn. Nike later revised its maternity policy, though Felix moved on to partner with Athleta. 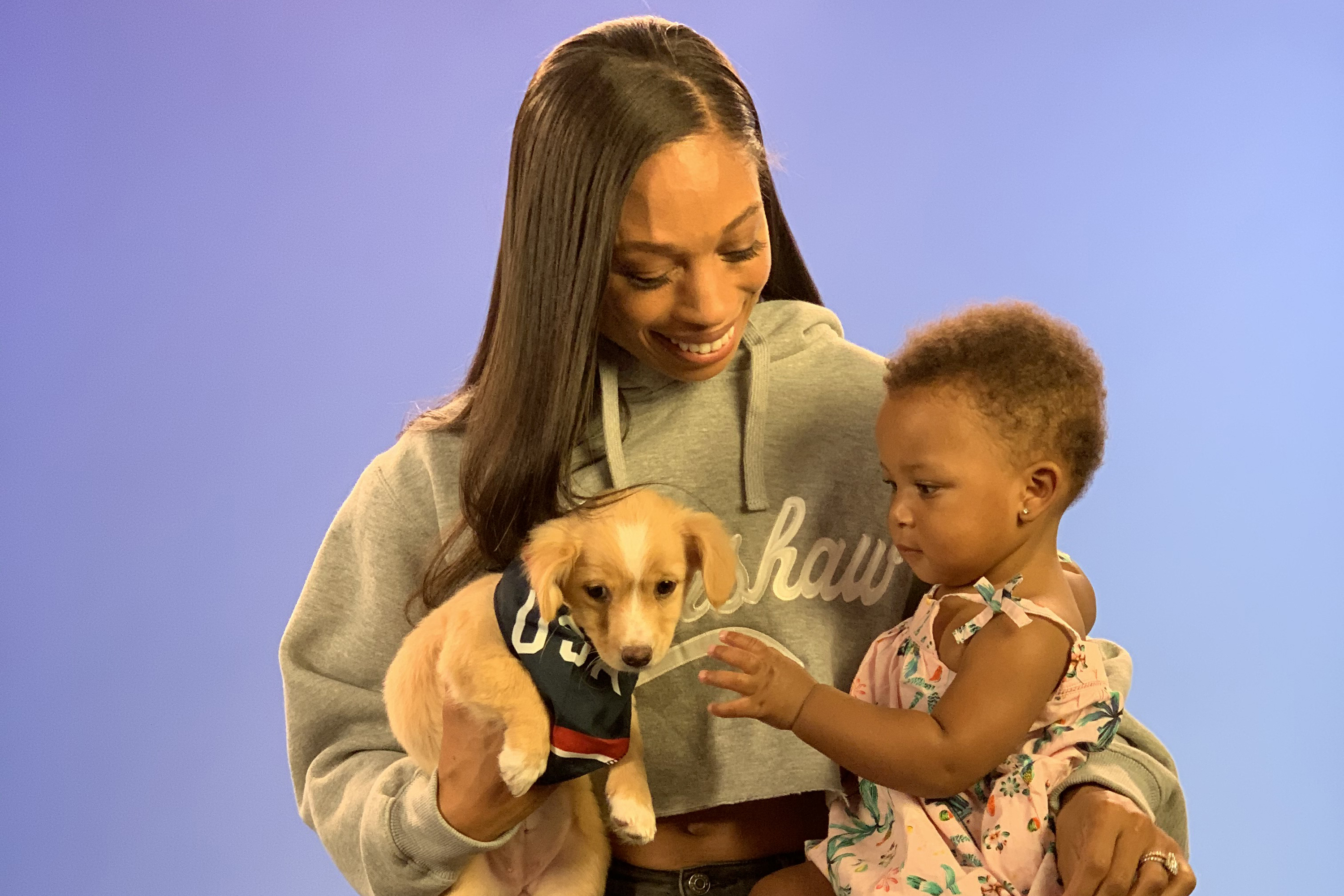 Here, the production team is interviewing and shooting Felix for “On Her Turf,” a multi-platform program dedicated to celebrating female athletes, which NBC Sports introduced during the PyeongChang Winter Games in 2018.  On this set, we see Felix as both Olympian and mother, as her husband, fellow track and field athlete Kenneth Ferguson, places their daughter Camryn on Felix’s lap for yet another shoot, along with one of the puppies.

We continue through the production labyrinth and from another social stage appears Jacques Slade, a YouTube creator who has partaken in campaigns such as TBWA/Chiat/Day’s “Slave-Made Trainers” campaign for Thomson-Reuters and Foot Locker and Nike’s nostalgic “Discover Your Air” push out of Laundry Service. Slade is just one of the influencers who will be partaking in WeHo, and he’s here today to meet with the athletes and create videos that bring a twist to the typical interview. 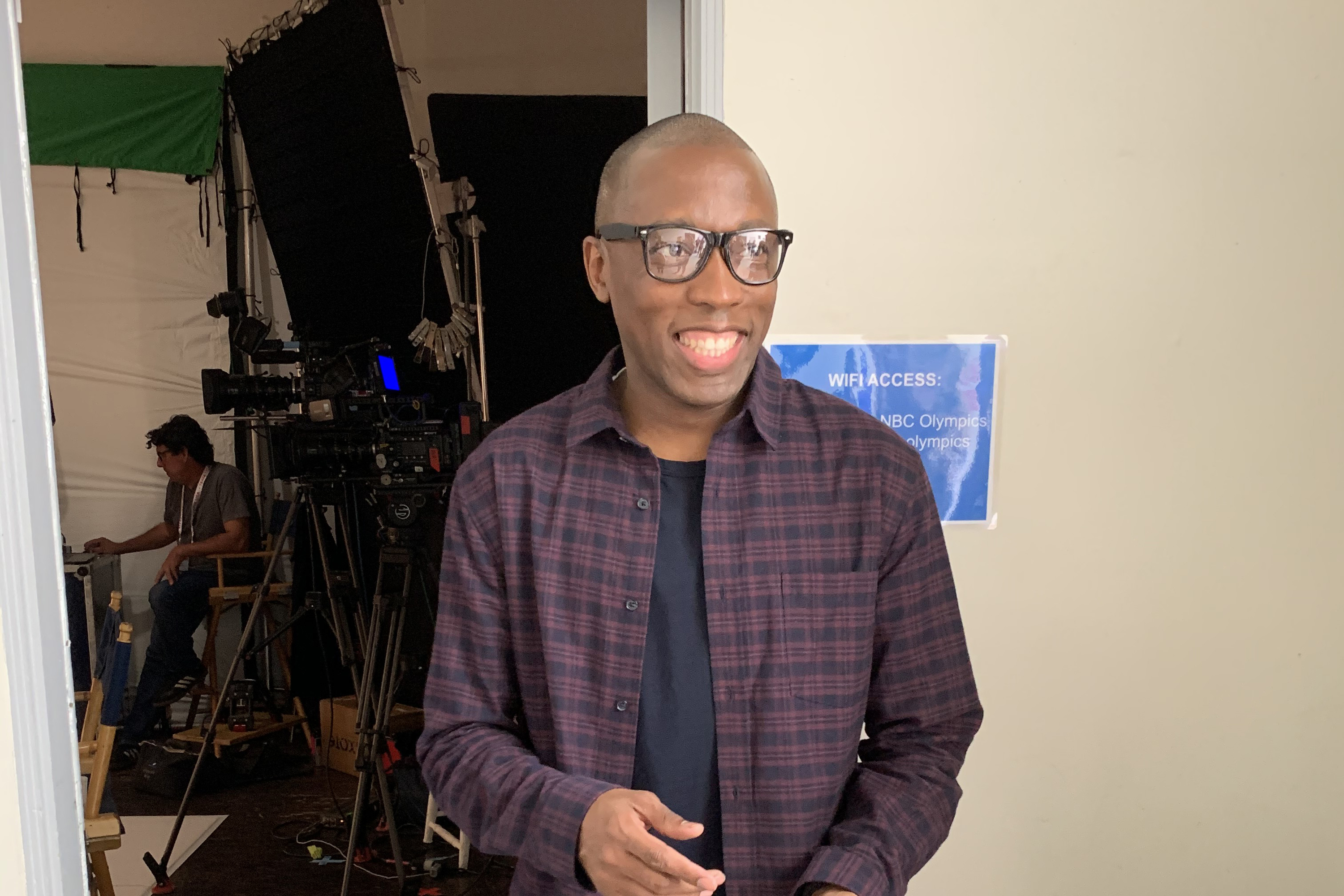 Outside, there’s another social media setup using a Bosco high tech photo booth, where athletes can pose with props against a variety of backdrops to create quick content that’s easily shareable.

Around the common area are also various interview setups where athletes share everything from their basic histories to more personal stories, elaborating on information they provided ahead of the event in detailed questionnaires. It’s here that veteran sportscaster Mike Tirico—who took over Olympics hosting duties from Bob Costas in 2018—has been sitting down with athletes to create “official” interview content, or just to get to know them a little better to prep for his hosting of the Games ahead. 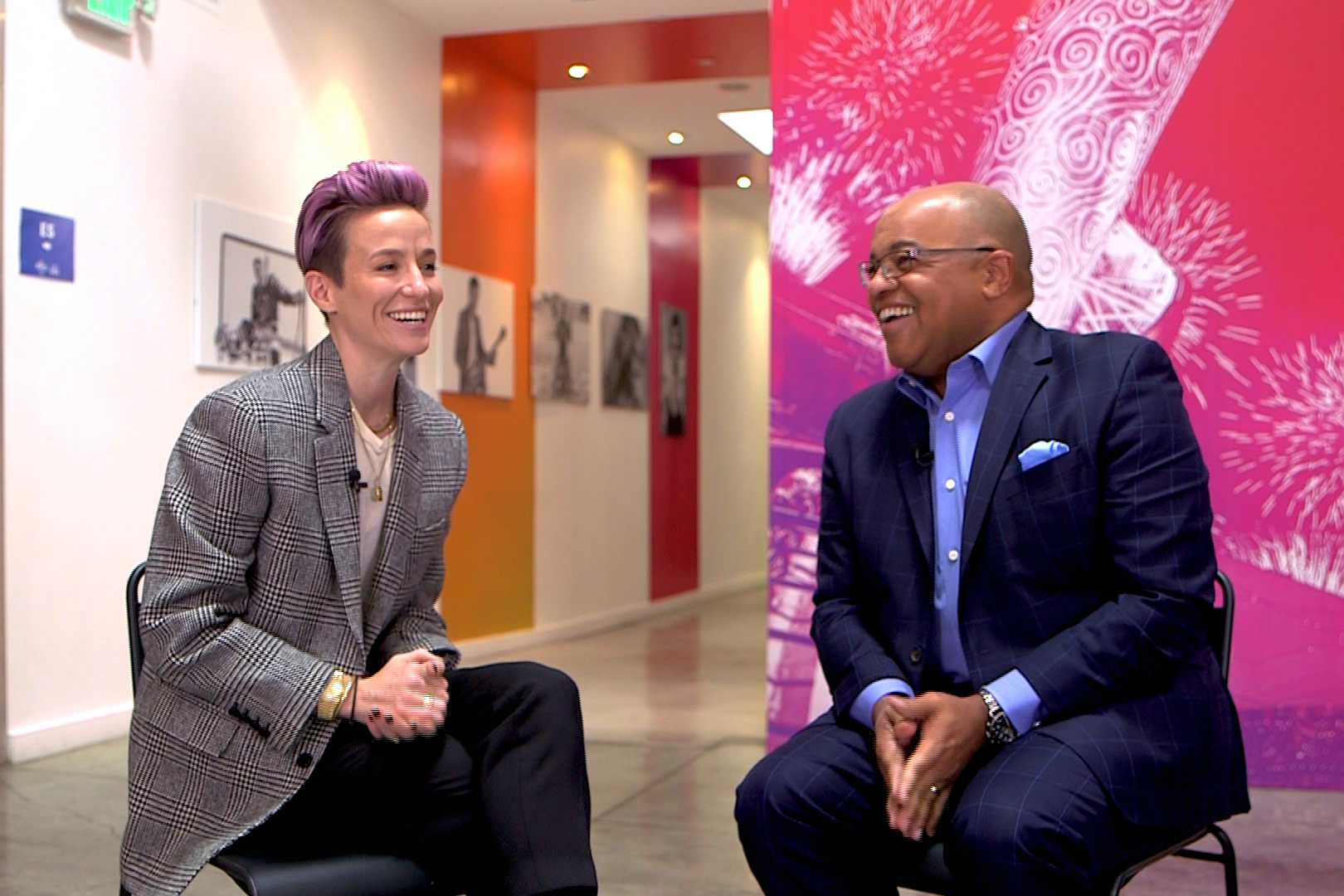 “We carry the responsibility of telling the stories of the people America wants to get to know, so at some point, we need to get those stories,” says Tirico. What he gets from WeHo—from doing things like casually hanging out with Felix, her family and a puppy—is not the sort of intel you glean from reading a bio or article.  “When you hear people tell their own stories, it sticks with you a little bit differently.”

Across the street, on yet another campus of the studio are even more stages. On another lifestyle stage, athletes dress in workout gear and share a more personal side of themselves. It was here that earlier in the week, track and field champ Noah Lyles let loose dancing to Michael Jackson, which he shared on Instagram stories and Twitter.

This is my new favorite video pic.twitter.com/0BiJvC6om8

In another room, Getty Images is inviting the athletes to "light paint" for more photographs to provide via the wire service, while the USOPC has a dedicated stage to capture various types of content for its own channels.  “Knowing that resources are always diminishing, we do as much as we can to provide material for the media to cover our athletes and allow their readers to get to know our athletes,” says Lindsay Hogan, senior director of marketing communications for the U.S. Olympic Committee.

Overall, what WeHo affords NBC Olympics, the USOPC and the athletes themselves is the ability to tell multidimensional, quality stories efficiently and with ease. “It happens during Olympics year, the year you’re more interesting to people, but it’s also the most demanding training-wise, so to have a full day where you can knock everything out is helpful to our training schedule,” says Felix. 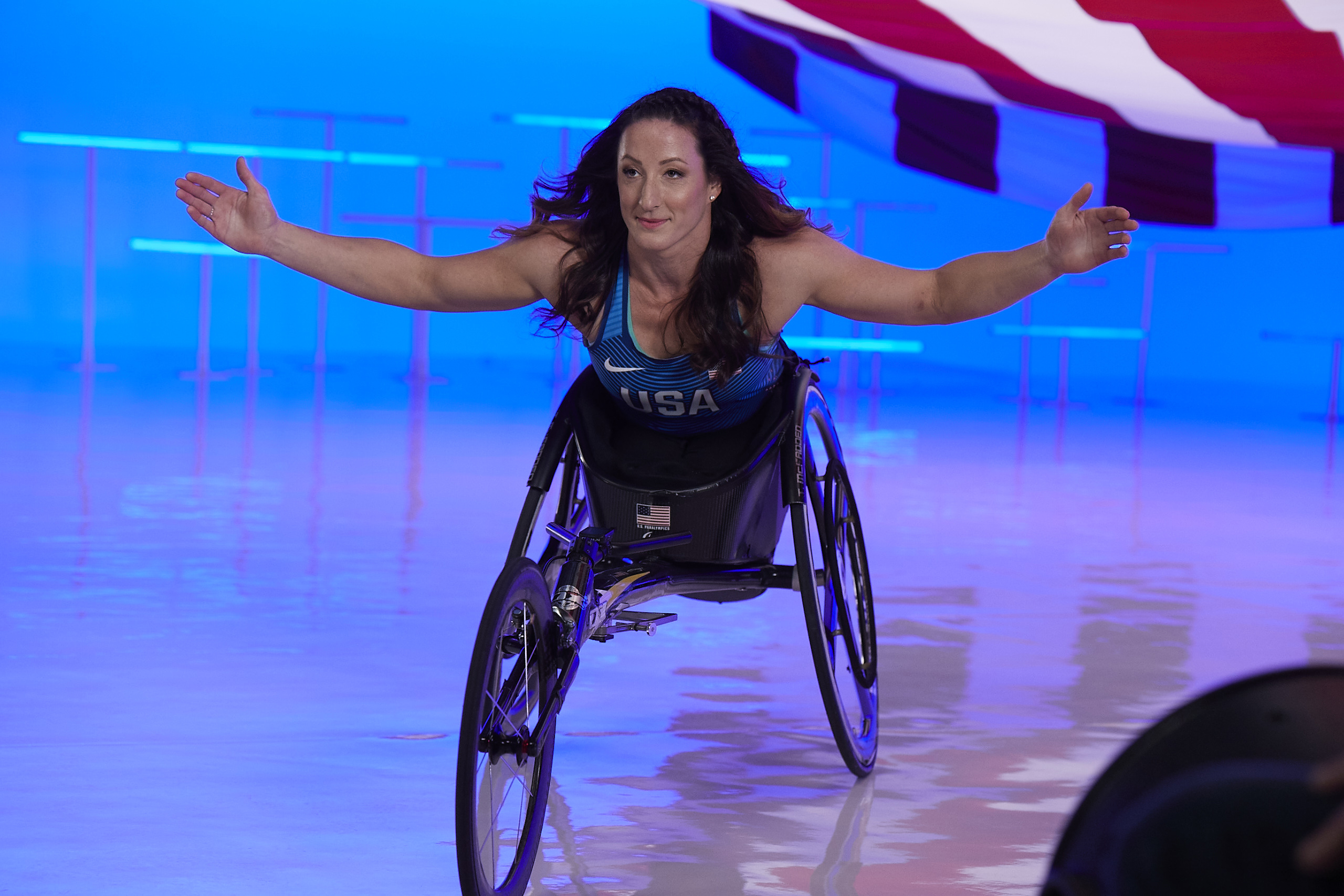 For Paralympic wheelchair racer Tatyana McFadden, the stories captured during WeHo also have been crucial in creating awareness for her sport. “It’s had such a trickling effect on what other countries can do for their Paralympic athletes,” she says. “For me, it’s important to be a voice for Paralympics and wheelchair racing, and to be able to educate on how everything has evolved, we can do it all right here.”

~ ~ ~
CORRECTION: Due to an editing error, an earlier headline incorrectly reported that the WeHo event was in preparation for the Special Olympics, which is not affiliated with the United States Olympic and Paralympic Committee.