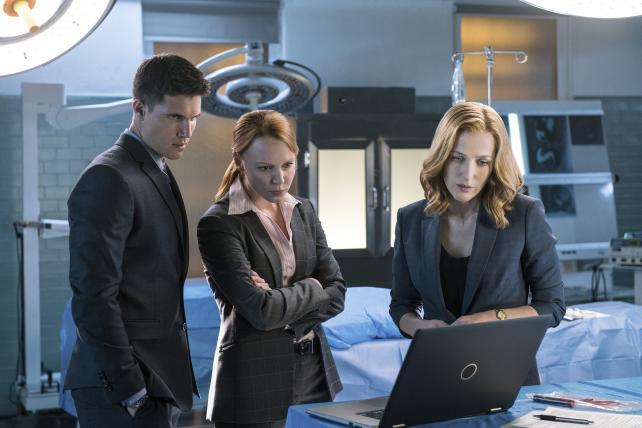 While broadcasters continue to peddle the narrative that live ratings data isn't at all relevant in an age of time-shifted viewing, hyper-fragmented audiences and the steady erosion of appointment TV, the currency data suggests otherwise. According to the latest batch of Nielsen C3 data, commercial deliveries and live-plus-same-day ratings remain statistically simpatico, so much so that it's becoming glaringly obvious that only a handful of shows are recapturing a significant amount of "lost" ad impressions in playback.

According to Nielsen C3 data, the Big Four networks in April averaged a 1.3 primetime rating in the 18-to-49 demo, up one-tenth of a point from the 1.2 they scratched out over the same period in the live-same-day ratings. The 8% lift upon conversion to the industry-standard currency is consistent with February's 11% differential, when ABC, CBS, NBC and Fox averaged a 2.0 in C3 and a 1.8 in the live-same-day ratings.

Earning back hundreds of thousands of commercial impressions that otherwise might be lost to the DVR and other vehicles that promote ad avoidance is nothing to sneeze at. But the overall year-over-year currency declines suggest that, for every step forward broadcasters take, they slide two steps back. Season-to-date, C3 deliveries are down nearly 10% from the period a year earlier.

C3 overperformers
As has been evident throughout the season, there are a few individual programs that manage to shine in C3, although they remain the exception rather than the norm. For example, through Week 31 of the 2015-16 campaign, Fox's megawatt "Empire" continues to enjoy a huge bump up from L+SD to C3, improving 24% from its initial 4.6 rating to a 5.7 in the currency. (When an additional four days of commercial views are folded in to achieve the extended dance remix that is C7, "Empire" soars north of a 6.0 in the so-called dollar demo.)

For all the ad impressions "Empire" delivers, it still plays second banana to AMC's "The Walking Dead," which in its sixth season averaged a 6.3 rating in C3, down a negligible tenth of a point from its live-same-day tally. (Interestingly enough, AMC has bragging rights to three series that would rank among broadcast's top 10 C3 performers; along with the top-rated zombie franchise, the offshoot "Fear the Walking Dead" ties "Modern Family "and "The Voice" for fifth place with an average rating of a 2.9 in the currency, while "Talking Dead" matches "NCIS" with a 2.3 rating.)

Like "The Walking Dead," TV's top draw with the 18-to-49 crowd, NBC's "Sunday Night Football" dipped slightly upon examination of its commercial deliveries, winding up with a season-average 7.9 rating in the demo versus the 8.0 it served up in live-same-day.

Fox and ABC are poised to end the season as they began it, with both nets laying claim to some of the biggest absolute gainers on the broadcast schedule when going from live-same-day to C3 ratings. ABC's TGIF dramas "Scandal" and "How to Get Away with Murder" both added a half-point to their seasonal averages, for example, with the Kerry Washington potboiler jumping 24%, from a 2.1 in L+SD to a 2.6 in C3, and "Murder" improving 26% from an initial 1.9 rating to a 2.4. C3 also helped "Murder" defray some of its big year-over-year declines; per live-same-day data, "Murder" is down 37% in the demo, but when its season-to-date C3 numbers are compared to its freshman outing, the total drop is reduced to 20%.

The benefits of VOD
Along with "Empire," Fox's biggest C3 acts include "The X Files," which grew 13% to a 3.6 upon conversion to the currency, and "Family Guy," up 27% to a 1.9. As it happens, "Empire" and "The X Files" also draw the most VOD impressions, which is particularly advantageous as cable and satellite on-demand services typically don't let viewers fast-forward through the ads.

NBC and CBS shows don't tend to demonstrate the same success in recapturing lost commercial impressions, although the Peacock has one bona fide grower in "Blindspot." The inked-up procedural jumps 20% to a 2.4 in C3. CBS, for its part, generally sees negligible gains; for example, its top-rated series "The Big Bang Theory" ticks up just one-tenth of a point in the network's target demo (adults 25 to 54), starting from a 5.4 live-same-day base and ending up with a 5.5 average in C3.

Lastly, the youngest-skewing broadcast net, the CW, sees a 29% lift in the currency with its veteran strip "Supernatural," which posts a 0.7 live-same-day rating and a 0.9 in C3.

Not surprisingly, lower-rated shows tend to experience very little, if any, improvement in C3, as failure to make any kind of impression with a live audience almost always translates into a general disinterest in catching up on other platforms. For example, ABC's canceled Sunday night drama "Blood & Oil" saw no discernible lift between live-same-day and C3, nor did Fox's newly-axed "Cooper Barrett's Guide to Surviving Life."

The outlier remains Fox's "Scream Queens," which to a great extent earned its renewal on the strength of the commercial impressions it delivered in playback.

The currency against which the vast majority of TV ad transactions are made, C3 blends a very rough estimate of average commercial ratings with three days of time-shifted viewing; as such, it offers networks, buyers and marketers the best approximation of actual ad deliveries. Or, to put it more plainly, C3 (and increasingly C7) are quite literally the only relevant ratings data.

The networks do not release the currency data to the public, and if they had their druthers, they would prefer that no one outside the transactional nexus get a glimpse of the numbers. (But as Mick sagely observed so long ago, you can't always get what you want.) Accept no substitutes; as much as broadcasters like to muddy the waters with stats-padding live-plus-three-day and live-seven numbers that omit commercial deliveries altogether, the only ratings that matter to advertisers are C3/C7.