Just as the big broadcasters are settling in to their fall seasons, one of network TV's biggest challengers, AMC's "The Walking Dead," is returning Sunday to make itself felt. 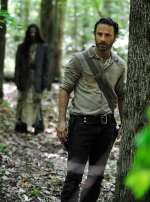 "The Walking Dead" became the most watched show among adults 18 to 49 years old last season, with 8.1 million in that demographic and 12.4 million total viewers ultimately tuning in to the season three finale. In comparison, CBS powerhouse "The Big Bang Theory," broadcast's highest-rated scripted program in the demo, was watched by 6.6 million 18-to-49-year-olds last week.

The success of a small cable channel's post-apocalyptic zombie series has turned TV conventions on their head, in both programming and advertising.

Broadcasters are taking their cue, not only filling this seasons' schedule with darker genre programs like Fox's "Sleepy Hollow" and NBC's "Dracula" but also limiting seasons to shorter runs, cable-style, partly in an effort to sustain the drama longer.

Fox's "Sleepy Hollow," for one, has been one of the most successful new entries of the fall, debuting to 13.6 million viewers, the most for a new Fox drama since "24" began in November 2001. The network ordered a second season after just three episodes had aired.

But Fox did not extend the first season beyond its planned 13 episodes, sticking by its strategy of airing "Sleepy Hollow" as a limited series. Full seasons of a typical broadcast show often include 22 to 24 episodes. The third season of "The Walking Dead" ran 16 episodes.

"While we can't credit this 100% to 'The Walking Dead,' the show, and shows like it, have changed broadcasters' approach," said David Campanelli, VP-director of national broadcast at Horizon Media.

The "limited series" tactic has been popping up across broadcast to mixed success: Both CBS' "Hostages" and ABC's "Betrayal" have been lackluster out of the gate. But Mr. Campanelli said showing restraint is smart in the long run, a lesson partly taught by cable.

"The Walking Dead" has also defied tradition when it comes to advertising. The biggest brands have long bought into family-friendly programming that attracts broad audiences. But marketers are becoming increasingly accepting of grittier fare, and some have proven willing to pay broadcast-like prices for the big, desirable "The Walking Dead" audience.

Hyundai has had an ongoing relationship with the series since season two, with its often-seen Tucson SUV nearly becoming a character itself, and is broadening the partnership for the fourth season starting this Sunday.

It recently asked fans to design their own zombie survival machine via a "Walking Dead Chop Shop" app, with the winning design appearing at New York Comic Con this week. That allowed Hyundai to feature other cars besides the Tucson, which might otherwise have required the show's survivors to coincidentally happen across another abandoned Hyundai model in desirable condition.

"'The Walking Dead' has key ingredients you want in a show these days: not only huge ratings, but social media chatter and loyal fan base and a successful offshoot, 'Talking Dead,'" said Hyundai's CMO Steve Shannon, referring to the live after-show. "Talking Dead" has become a hit in its own right, with 5.2 million viewers in the season finale.

"We are always looking for properties where you can find a loyal fan base that's passionate and enthusiastic," said Jason Croddy, account director at Initiative, which has worked with Hyundai on the activation and integration since season two. "'The Walking Dead' was one of the first shows, especially on basic cable, to take a lot of risks and not necessarily play it safe." 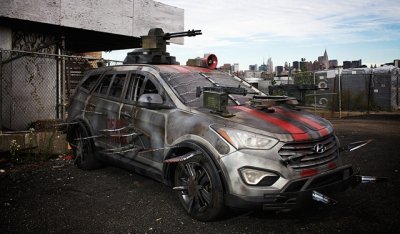 While "The Walking Dead" is considered a must-buy show among certain advertisers, especially in the film and entertainment categories, there is still some hesitancy among brands who are wary of gory content, Mr. Campanelli said.

It's also expensive, however, to buy 30 seconds of "Walking Dead" ad time. Marketers purchasing commercials in the so-called scatter market, where commercial slots are sold relatively close to the air date, encountered prices last season around $400,000, according to media buyers. Season-three ad packages even for those who bought time earlier hovered between $200,000 and $260,000.

And although original series like "The Walking Dead" set a new precedent for what cable networks can do, with just 16 "Walking Dead" episodes or so to a season, there's a relatively limited opportunity for advertisers, Mr. Campanelli said.

The return of "The Walking Dead" comes just weeks after the series finale of AMC's late-blooming hit, "Breaking Bad," and at an important juncture for the network, which has had a relatively successful run of originals.

With "Breaking Bad" over, "Mad Men" entering its final season (albeit stretched over two years), "Hell on Wheels" moved to Saturday nights and "The Killing" canceled yet again, the basic cable channel is looking to prep new series.

AMC President Charlie Collier acknowledged the low success rate for new TV shows, but said he is confident about the network's odds and development process. AMC has greenlit two original drama series for 2014, "Halt & Catch Fire," about the computing boom of the 1980s, and "Turn," which tells the story of an 18th-century New York farmer who becomes a spy.

AMC will also look to extend the lives of both "Breaking Bad" and "The Walking Dead" with spin-offs. Broadcasters will likely again try to absorb their lessons.