Feel-Good Hit of the Summer: 12 Seasons in, 'America's Got Talent' Shows No Sign of Letting Up | Ad Age
Skip to main content

Feel-Good Hit of the Summer: 12 Seasons in, 'America's Got Talent' Shows No Sign of Letting Up 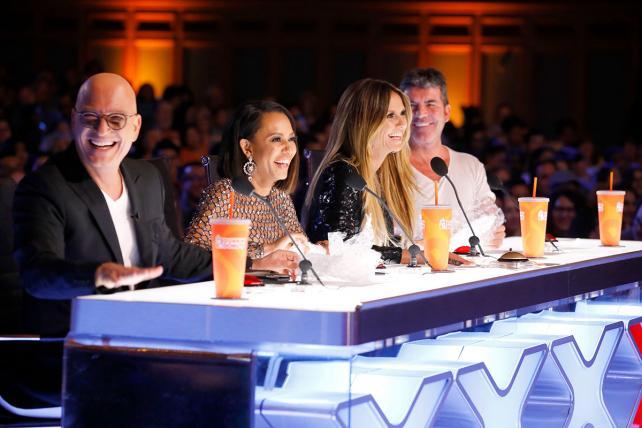 We're already one-third of the way through the 18-week summer TV schedule, and while there are still a number of series that have yet to take their bows, it appears unlikely that any will unseat the sweaty season's longtime ratings champ.

Now in its twelfth season, NBC's million-dollar competition series "America's Got Talent" remains summer TV's gold standard. Through its first five episodes, "AGT" is averaging 12.5 million live-plus-same-day viewers and a dizzying 2.6 rating in NBC's target demo, which translates to 3.3 million adults 18-49. (Transfer those demo deliveries to the regular season, and "AGT" would rank fourth among all non-NFL broadcast programs, trailing only "The Big Bang Theory," "Empire" and "This Is Us."

While "AGT" reaches a somewhat older crowd (the median age of the viewers who tuned in to last Tuesday's broadcast was 57.4 years), the show's talent pool of dancing dogs, pre-teen puppeteers and crooning cabbies also helps draw a fair amount of younger enthusiasts as well. In each of the five nights it has aired thus far this summer, "AGT" has put up the highest ratings among the adults 18-34 crowd; currently, the show is drawing around 1.1 million members of the younger demo per broadcast.

"AGT" was network TV's highest-rated summer series in 2016 and 2015, and it tied CBS's thrice-weekly "Big Brother" in 2014. Advertisers covet such high deliveries and consistency, especially during a time of year when TV usage is fairly low, so it's not at all surprising that Dunkin' Donuts has signed on for a third season as an integrated sponsor of "AGT."

As much as "AGT" has been an invaluable asset to NBC, until very recently, the show had never served as a launch pad for a 10 p.m. lead-out hit. That all changed on May 30, when the Peacock took the wraps off its new hoofer competition series, "World of Dance." After bowing to 9.7 million viewers and a 2.4 rating among adults 18-49, "World of Dance" has gone on to average a 2.0 in the target demo. That's a stellar turnout for a summer series that airs in the ghost town that is the 10 p.m. time slot -- during the 2016-17 season, the average rating for the final hour of broadcast prime was a lowly 0.9 -- and as such, NBC quick renewed "World of Dance" for a second season.

As of Sunday, "Big Brother" had aired just two episodes of its 40-episode 19th cycle, averaging 5.63 million viewers and a 2.0 in CBS's target demo, or around 2.4 million adults 25-54. Through its first three episodes, the sixth season of "American Ninja Warrior" is averaging a 5.71 million viewers and a 1.5 in the 18-49 demo, while "The Bachelorette" has reached the halfway point of its 13th season with rather similar numbers (5.53 million viewers and a 1.5 rating). In the early going, "Big Brother" and "American Ninja Warrior" are both down two-tenths of a point in their respective demos versus the year-ago period, while "The Bachelorette" is experiencing a more steep decline, falling 25% compared to last season's 2.0 rating.

While there are any number of factors that can drive down a veteran show's ratings, as The Atlantic's Megan Garber recently noted, this season of "The Bachelorette" has been, well, problematic. (If nothing else, it doesn't sound like it's probably very much fun to watch, unless there's more to the new Guilty Pleasure/Buzzkill genre mashup than meets the eye.)

It's all fun and games until someone loses and eye
For all that, "The Bachelorette" remains ABC's top-rated summer series, edging "Celebrity Family Feud" by a tenth of a point. Now in its third season on ABC, the spinoff of the classic Mark Goodson-Bill Todman game show anchors the network's Sunday night Fun & Games lineup, which includes the newcomer "Steve Harvey's Funderdome" and $100,000 Pyramid." At present, the game show block is averaging a 1.2 in the 18-49 record, down two ticks versus the year-ago 1.4 rating ABC was averaging last summer with "Feud," "Pyramid" and "Match Game."

Just four years ago, ABC had six scripted series on its summer schedule, but now the bulk of its sultry-weather slate is dedicated to reboots of retro game shows. Joining "Feud" and "Pyramid" as a special Thursday night extension of the Fun & Games initiative are new-look versions of the '70s oddities "Battle of the Network Stars" and "The Gong Show" -- the latter of which features an almost unrecognizable Mike Myers, who holds down the old Chuck Barris role in the guise of a 72-year-old British comedian named Tommy Maitland. (Your guess is as good as ours.)

Naturally, the revived "Battle of the Network Stars" doesn't feature the same ABC vs. NBC vs. CBS dynamic of the original series (the specter of Johnny Galecki or Milo Ventimiglia drowning in the dunk tank while shooting an ABC show likely made the old format a hard sell), but a fair amount of nostalgia seekers did tune in to sample the June 29 premiere. Starring a cast of "Where Are They Now" types like Lisa Whelchel ("The Facts of Life"), Bronson Pinchot ("Perfect Strangers") and Tom Arnold ("The Jackie Thomas Show," anyone?), the first installment of "Battle of the Network Stars" drew a respectable 4.14 million viewers and a 1.0 rating in the 18-49 demo.

On the heels of "Battle," "The Gong Show" retained nearly all of its lead-in, drawing a 0.9 in the demo, or a little more than 1.15 million members of the under-50 set, making it TV's top-rated show in the Thursday 10 p.m. time slot.

If the original "Gong Show" was the antithesis of present-day shows like "America's Got Talent" (the contestants were talentless and delusional and not just a little bit creepy, and Barris and the celebrity panel spent much of their screen time ridiculing them), the 2017 version is decidedly more sedate and not nearly as mean-spirited. The contestants are still ridiculous, however, as was evident in the first episode when the balloon-popping, unicycle-riding, bagpipe-playing guy in the gorilla costume showed up to do his bit.

Other new series of note are Fox's "Beat Shazam," which is currently averaging a 1.0 in the 18-49 demo, and NBC's geriatric talent show "Little Big Shots: Forever Young," which is also posting a 1.0 rating. As one might expect from a program that features nonagenarian gymnasts and 80-year-old tap dancers, the audience for "Forever Young" is well into its sunset years. Per Nielsen, the median age of the viewers who watched last Wednesday's episode was 63.6 years, or nearly a decade north of the terminal age in the oldest TV demo (adults 25-54).

The dog days of summer
Of course, as is the case during the regular season, a good chunk of the summer TV lineup isn't making much headway with viewers, and scripted shows are particularly struggling. ABC on June 22 effectively canceled the ShondaLand drama "Still Star-Crossed" after the show's third episode, which drew an insupportably low 0.3 in the 18-49 demo. Beginning July 8, ABC will burn off the remainder of the show's freshman run on four consecutive Saturdays.

Also getting put down is ABC's chatty-canine comedy, "Downward Dog," which averaged just shy of 900,000 adults 18-49 in its brief Tuesday night run. After ABC on June 23 announced it would not be picking up "Downward Dog" for a second season, the show's co-creators said they would try to find a new home for the comedy.

A week after "Downward Dog" took the big dirt nap, NBC said it was pulling the plug on its most established comedy. Currently in its third season, "The Carmichael Show" is averaging 3.69 million viewers and a 0.8 in the demo, which marks a 33% decline from its year-ago 1.2 rating. Ratings weren't a primary consideration in NBC's decision to pass on a fourth season of the multi-cam, which became a non-starter when star and creator Jerrod Carmichael revealed that he was leaving the show.

Another summer show that has failed to make a splash is NBC's "Sunday Night with Megyn Kelly," which has lost half of its premiere audience in the span of just four weeks. Since bowing June 4 to 6.2 million viewers and a 1.2 in the news demo, the most recent "Sunday Night" broadcast drew 3.41 million viewers and a 0.6, which works out to 721,000 adults 25-54. Also struggling is CBS's compellingly nutso drama "Zoo," which returned for its third season last Thursday in front of 2.99 million viewers while eking out a 0.7 rating among adults 25-54. That marks a 42% drop compared to last summer's opening episode, which drew a 1.2 in the target demo.

Among the scripted series set to premiere this month are CBS's "Salvation" (Wednesday, July 12) and NBC's "Midnight, Texas" and ABC's "Somewhere Between," both of which are scheduled to bow on Monday, July 24.