READ THIS NEXT
Rethinking TV attribution: The full-funnel approach
'Idol' is back.
Credit: ABC/Eric Liebowitz

ABC's reboot of "American Idol" is refocusing the show's narrative to highlight the contestants' journey.

Gone will be bash sessions for embarrassing auditions; in their place, "Idol" will feature optimistic and heartwarming stories with advertiser-friendly storylines that have drawn two major sponsors in Macy's and Zyrtec.

It's all part of ABC's effort to put its own spin on the franchise when it revives "Idol" on March 11 while staying true to what made the original a phenomenon.

The show redefined TV integrations during its 14-year run on Fox, with Coca-Cola's red cup becoming as much a part of the show as host Ryan Seacrest. Not many people in the U.S. even knew what text messaging was before AT&T asked viewers to use it to vote for their favorite contestants.

But much has changed since "Idol" debuted in the summer of 2002. Netflix has made binge-watching and commercial-free experiences popular methods of TV consumption. Social media continues to distract from more traditional forms of entertainment. And the sheer volume of content has made it incredibly difficult for any one program to break through. Not to mention there have been a host of other reality singing competitions that have followed in the footsteps of "Idol."

In this new version, the judges—Katy Perry, Lionel Richie and Luke Bryan—are there to support the contestants and find a true star, says Trish Kinane, showrunner and executive producer for the new "Idol."

"We are making sure we tell the stories of the contestants and talent in ways viewers get engaged with and want to follow them into the live shows and after it is over want to support their career," she says.

"What we found for 'American Idol,' which has been true since its inception, the judges are interesting and important, but it's about the story of the contestants," says Rita Ferro, president ad sales, Disney-ABC TV Group.

Macy's and Zyrtec will use social media and digital platforms to give viewers a more personal look at the contestants and build excitement and fandom in between live episodes. 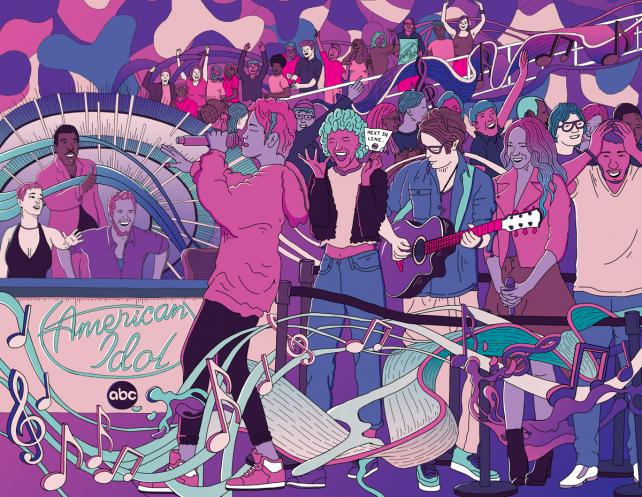 The over-the-counter allergy medication isn't the first thing you think about when you watch "American Idol," but the brand wants to establish a loose connection, using the show to promote its message of "dreaming daily" and show customers how they can help them get the most out of the spring season, when allergy suffers often struggle the most.

"Part of the reason we love 'American Idol' is the spirit of the show is so high-energy.... The contestants never know when the time on the show will end, so it is important to squeeze the most out of it and seize every opportunity," says Marguerite Longo, allergy commercial leader at Zyrtec parent company Johnson & Johnson.

Longo links that idea back to Zyrtec's marketing message: "We spend the whole winter bundled up waiting until spring. We want to help people get outside and spent time with family and friends."

Zyrtec will sponsor a seven-week digital series featuring past "Idol" contestants that will run on ABC.com and on Twitter. The series will highlight the "Idol" journey of some former contestants and include interviews discussing how they made the most of their time on the show and where they are now.

Zyrtec will promote the digital series through 15-second bumper spots that will run during the live broadcast and with some commercials showcasing stories from current contestants and members of the "American Idol" team.

The sponsorship will extend to ABC's "Good Morning America" and "Live with Kelly and Ryan," where Zyrtec will sponsor "Idol"-related segments, as well as a contest where viewers can win the chance to attend an "Idol" after-party.

Macy's will take viewers inside the physical transformation of the contestants by working with the show's stylists to help contestants create their own looks. The retailer, whose logo features a red star, will document these makeovers on Facebook and Instagram, with weekly posts showing how it's helping stars get made.

There will also be several in-show segments, starting premiere week. Macy's senior VP of fashion and digital strategy will appear in the first of such taped segments alongside Ryan Seacrest at the Macy's Herald Square store in New York City discussing fashion.

ABC is in conversations with one additional sponsor.

"American Idol" has been credited with reinventing product placement on TV. When Coca-Cola signed on as the initial sponsor back in 2002, with a deal valued at $10 million, it was considered a huge coup. The 13-season partnership included branding the show's green room a "red room."

The series also helped AT&T turn a fledgling form of communication into mainstream behavior. In 2003, AT&T asked fans to vote by text message for their favorite "Idol" contestants. That year's season finale broke records at the time for the biggest text-messaging event by a single carrier, with one-third of those who texted their votes having never sent a text message prior.

ABC desperately needs "American Idol" to pop. Through week 19 of the 2017-18 broadcast season, ABC is once again in last place among the big four broadcasters among the advertiser-coveted 18-to-49 demographic. It's averaging a 1.4 in the demo, a 13% decline from the same period last year.

And looking at commercial ratings in the three days after a show airs, the industry standard known as C3 against which advertising is bought, ABC is also in last place, averaging 1.4 million viewers in the demo, down 15% from the same quarter last year.

On Sunday nights, "Idol" will replace "America's Funniest Home Videos" and "Shark Tank," both of which are averaging a 1.0 rating in the demo. Sunday nights have been a hodgepodge for ABC, with the reality series "Toy Box," which did a 0.4 rating at 7 p.m. and "Ten Days in the Valley," which also only managed a 0.4 rating at 10 p.m. before being relegated to Saturday night.

But on Monday nights, "Idol" will fill in for ABC's two highest-rated unscripted shows, "The Bachelor" and "Dancing With the Stars." "The Bachelor," which is averaging a 1.7 rating in the demo, is tied with "Modern Family" as ABC's third highest-rated show, behind "Grey's Anatomy" and "Good Doctor."

"Idol" will go head-to-head with "The Voice" on Monday nights, which could be challenging for both reality singing competitions.

At its peak, "Idol" was watched by over 30 million people. Its most-watched finale, the Season 2 showdown between Clay Aiken and Ruben Studdard, brought in 38 million people.

But it lost more than half its audience by its final season on Fox, with the series finale drawing 13 million viewers and a 3.0 rating in the 18-to-49 demographic.

For marketers, "Idol" became another show on the schedule. It had lost both Coca-Cola and AT&T as sponsors. (Ford stuck around until the end.) And advertisers were paying less than $200,000 for a 30-second spot in the last season, down from $500,000 or so at its height.

ABC's reboot cost advertisers around $200,000 for a 30-second unit during upfront negotiations, according to Ad Age's analysis.

"Do we think it is going to do what it did in 2002? No, because TV isn't watched the same way," says Robert Mills, head of ABC alternative programming. But Mills expects "Idol" to be the biggest reality competition show on TV, if not the most-watched entertainment program.

There are few TV programs outside of sports that generate large live viewership these days. To do that, Mills says "we had to make sure the contestants are fantastic and game changers like they were in the heyday and have real stories."

Even so, the new "Idol" will mount live performance shows for only five weeks, following the audition rounds, "Hollywood Week" cuts and a week of taped celebrity duets. That's down from the old days on Fox. "The climate today, you won't see 19 or 20 weeks of live shows," Kinane says. "That's too long."