After swinging the ax on about 75 employees Thursday -- several of them top executives in the advertising group -- Martha Stewart Living Omnimedia has promoted Amy Wilkins to head of advertising, sales and marketing, the company said Friday. 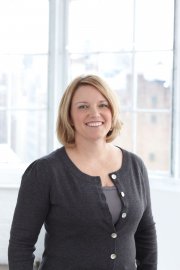 She assumes responsibilities that had been handled by Chief Revenue Officer Joseph Lagani, who left amid yesterday's cuts, according to a person familiar with the layoffs. Peter Medwid, the publisher of flagship publication Martha Stewart Living, has also left the company, this person said. No successor has been named yet.

Despite the steep declines, Martha Stewart Living magazine was up 11.7% in ad pages through the third quarter compared with the period a year earlier, according to the Publishers Information Bureau. Martha Stewart Weddings, a quarterly, was up 8%.

In a statement Friday, Mr. Dienst cited Martha Stewart Weddings' "record ad pages" this year. "Amy epitomizes the culture of the new Martha Stewart organization -- smart, driven, focused and entrepreneurial with a keen eye for understanding what our partners are looking for in terms of reaching our loyal audiences," he said.

Prior to joining MSLO, Ms. Wilkins had been publisher at Meredith Corp. titles such as Country Home and Better Homes and Gardens. She started her career at Time Inc.

~ ~ ~
CORRECTION: An earlier version of this article misspelled an outgoing executive's first and last names. She is Laura Petasnick, not Lara Pasternak.