Answered: What the Heck Is a Pop-Up Magazine? | Ad Age
Skip to main content
Sign In Register

Answered: What the Heck Is a Pop-Up Magazine?

ESPN The Magazine and Pop-Up Magazine's 'Live Issue' Not What I Expected
READ THIS NEXT
Watch Kim Kardashian West’s ‘SNL’ commercial spoof for Skims for Thick Dogs
David Teicher
Credit:

Last night I attended Pop-Up Magazine and ESPN Magazine's "Live Issue," a stage show at New York University's Skirball Center, without quite knowing what to expect.

I was there in my capacity as Ad Age 's event-content manager, keeping an eye out for ways to innovate and improve our own events. But even though I'd read my colleague Simon Dumenco's Q&A with Pop-Up Magazine Editor in Chief Douglas McGray -- "Wait, What the Heck Is a Pop-Up Magazine?" -- it was not at all how I imagined it would be.

For some reason I expected to see the live construction of an actual magazine -- editors roaming the stage, for example, hovering over the shoulders of writers, hacking away on modified typewriters that would somehow be connected to a projector so we could all witness the creation process in real time. 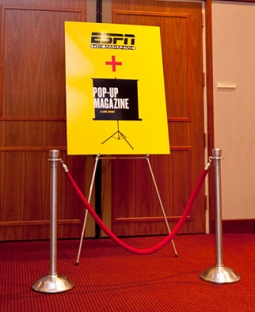 The scene before the audience was allowed in.

What actually happened? Think poetry slam meets performance art. One by one the writers, photographers and journalists took the stage and read their works, which were augmented in some way to make them "live." Neil Janowitz, for one, emerged dressed like he was about to run a marathon -- in some very short shorts -- and told us a story of world records, attempting a long jump and using a strip of light on the stage to illustrate the world record, effectively making the data tangible and bringing his story to life. In the real competition, we learned that there's an allowance for wind assistance, but there was no such draft helping him on stage. "Trust me, I would know," he said.

Other pieces, though, involved no readings. The New York Neo-Futurists made some kind of abstract point about water consumption in a performance art piece I won't pretend to understand. Basically, a guy stood there drinking eight eight-ounce cups of water in quick succession, handed to him by a group of people orbiting him -- also in runner's garb -- as they held up signs about said water consumption habits. I'm sure it was a deeply profound social commentary for those who are into that sort of thing. Or maybe not.

But "Radiolab" producer Pat Walters' "One Breath" piece on the sport (?) of freediving was the most interesting and best epitomized the event. He began by reading his story aloud. Then using simple, subtle techniques, he turned an article into an immersive, audience-involving experience. As he recounted the dangers and challenges of free-diving and one free-diver's tale, the sounds of rushing, bubbling water played in the background.

On the screen behind him, a blue background gradually grew darker and darker. Numbers flashed, indicating the depth at which we had now vicariously sank and how long we would have been holding our breath. After about 400 feet, a climb back to the surface, and over three and a half minutes since our last breath, Pat proclaimed, "For those of you still playing along, you can breathe now."

David Teicher
Follow View all articles by this author