Media Reviews for Media People: 'Teen Mom' and 'If You Really Knew Me'

Later tonight, MTV will uncork the second season of "Jersey Shore," the reality series that does for attentive laundry administration what FDR did for grand-scale public-works projects. Immediately after it airs, some serious-thinking person will take to the Internet, bemoaning the Snookification of American youth and preaching the perils of cavorting in non-staph-guarded Jacuzzis. The pundit will use this as a jump-off point to scold the network for its depictions of substance abuse and casual entanglements, and demand redress in the form of a tersely worded pre-show disclaimer. 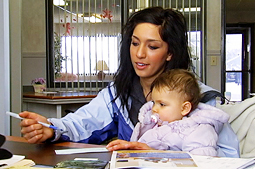 'Teen Mom'
And he or she will miss the point -- not about "Jersey Shore," which doesn't exactly aspire to anything more than entertainment -- but about MTV itself. Because for all its trend-mongering and manufactured theatrics, MTV does more to steer the youth-culture conversation in a positive direction than it does to flatten circa-1962 pillars of propriety and morality. There's a lot more on the responsibility side of the ledger than its critics care to admit.

These tendencies are on proud display on "Teen Mom" and "If You Really Knew Me," both of which should be mandatory viewing for under-parented teenagers. While the shows have little in common topically -- one tracks the plight of four young mothers, the other attempts to socially re-engineer bully-filled and ignorance-laden high schools -- neither counts entertainment as a primary goal. For a network founded on volume and whimsy, that represents a huge departure.

Above all else, "Teen Mom" is a cautionary tale. As the second season commences, its four protagonists find themselves in very different places -- socially, financially and otherwise. One arc tracks two parents who gave up their daughter for adoption; a second tracks a single mom whose family situation redefines passive-aggressiveness for a new generation of the emotionally akimbo. Their stories are conveyed without gloss and with only an occasional voiceover. As a result, they show exactly what's at stake without wagging a disapproving finger.

Indeed, "Teen Mom" works as well as it does because it is stridently non-judgmental. Viewers may wince at many of the things the protagonists say and at the welfare-endangering actions they take, but the show forces them to claim their mistakes as their own. So while some aspects of the show ring false -- dialogue that sounds pre-scripted ("So, did you think it would end up like this?"), scenes that feel staged (such as the one that happens upon a teen father at the exact moment he's poring over photos of the daughter he gave up for adoption) -- most of it comes across as plainly, depressingly real. And really, really depressing. 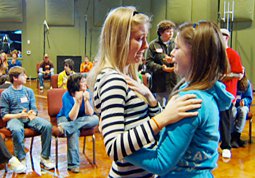 'If You Really Knew Me'
"If You Really Knew Me" doesn't balance the drama and the learnin' quite as adeptly. Invading a different high school every week, the show introduces a gaggle of stereotypical teens -- bitch, dork, jock, half-wit, bully/blacksmith -- and tracks them before, during and after "Challenge Day," in which a troupe of tattooed do-gooders tutor them in the dark arts of "being human and being together." In a series of games and exercises, the subjects are challenged to assess their own prejudice, selfishness and immaturity, and confront the individuals who have been wounded by it.

The problem is that every episode of "If You Really Knew Me" can only end one way: with the reprogrammed teens crying, hugging and pledging to act responsibly in the future, or at least until the next Facebook flare-up. While the producers attempt to add spice by diversifying the geographical locale -- next week's episode drops in on a high school that serves a gun-crazy hamlet, which could add Second Amendment fun to the mix -- there's no chance any episode will sound a pessimistic note at its denouement. In the real world, the wide-necked jock might not rethink his anti-nerd stance, and the mean girl might not choose to not embrace her inner Oprah.

Or maybe I've got this all wrong: Maybe, as "If You Really Knew Me" suggests, no teen is entirely unreachable once the consequences of his abusive behavior is laid out before him. Hell, what do I know? I married a cheerleader.

Indeed, as a Census-certified oldfella, I should refrain from commenting on modern-day MTV programming -- or for that matter, anything that doesn't reference napping technique or 1987. For all intents and purposes, the network served as my formative-years baby-sitter, and I'll never be able to forgive its decision to forsake the four-minute bites of awesomeness that comprise its attitudinal DNA.

That said, MTV deserves credit for pushing ahead with counterbalancing fare like "Teen Mom" and "If You Really Knew Me." Few programming entities have attempted to merge the train-wreck appeal of reality-era drama with the eat-your-vegetables drone of a public-service announcement. That MTV melds such divergent content so gracefully is an achievement in itself.