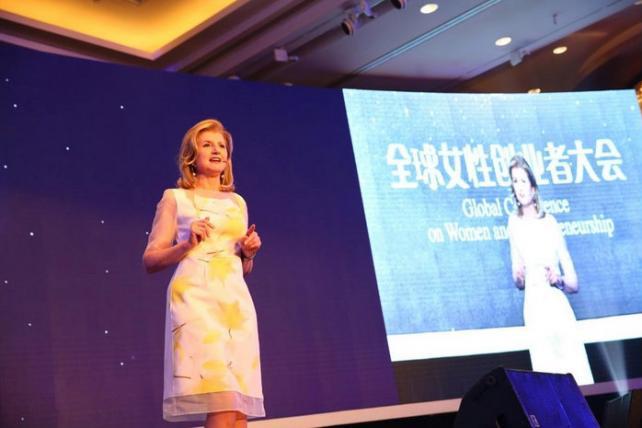 There's been a lot of speculation about the future of The Huffington Post now that Verizon is buying AOL, owner of the online news and content site, in a deal that seems to be primarily motivated by AOL's ad tech offerings. But AOL President Bob Lord told Ad Age last week that Verizon wouldn't sell AOL's content properties, and now Arianna Huffington, who founded The Huffington Post in 2005 and sold it to AOL in 2011, has said the same.

"Verizon wants to keep The Huffington Post," Ms. Huffington told reporters in Hangzhou, China, where she spoke at a conference on women's entrepreneurship hosted by Chinese e-commerce giant Alibaba Group Holding. "It has no interest in selling The Huffington Post. It wants to invest in growth."

Ms. Huffington said that continued investment in the site's growth, including its technology and video, was one of her two "paramount considerations."

"The other consideration of course is continuing editorial independence, which they have also promised," she said.

A Verizon spokeswoman did not immediately respond to a request for comment.

Verizon ran into trouble last year with SugarString, a website it created to cover tech news and other subjects, when SugarString's editor told potential writers that coverage of net neutrality and espionage were off-limits. Verizon said the editor was mistaken but the venture quickly shut down.

Verizon said last week that it would pay $4.4 billion for AOL, whose media brands also include TechCrunch and Engadget.

AOL has said the media brands would remain part of the business. But John Stratton, Verizon's exec VP-operations, told investors that the "principal interest" in AOL was in the ad-tech platform it had built up.

And despite assurances to the contrary, analysts have questioned whether Verizon will hang on to news sites like The Huffington Post, which is the No. 29th most-visited website in the U.S., according to Alexa.com. And Re/code reported that while AOL was working out the deal with Verizon, it was also in advanced talks to spin off The Huffington Post.

It's tough business launching online media in China, where the government simply shuts down internet access to news outlets it doesn't like. The New York Times, Bloomberg and The Wall Street Journal are among the sites that aren't accessible to people in mainland China unless they take special measures to hop over China's Great Firewall.

"We are only going to come to China with lifestyle and entertainment," she said. "We are not going to come with politics and news."