Britney Cover Is Relevant to Venerable Title's New Aims -- a Hoped-for Return to Profitability
READ THIS NEXT
More-subdued presidential debate sees drop-off in TV viewers
Britney Spears will land on the cover of The Atlantic.
Credit:

NEW YORK (AdAge.com) -- Longtime readers of The Atlantic are likely to do double takes when they see Britney Spears on its next cover -- a rarified piece of media real estate more often occupied with subjects such as Pakistan's A.Q. Khan, the biological basis for morality, the human qualities of George Washington or, in 1996, "Why Americans Hate the Media." 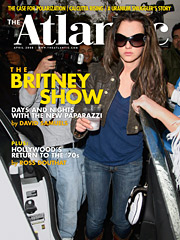 Britney Spears will land on the cover of The Atlantic.

At 150 years old, The Atlantic remains an intellectual journal of public affairs and culture. But owner David Bradley also wants it to end a long spell in the red. So in the past year it poached Justin Smith from The Week to become its president; committed to moving its ad-sales team from Washington to New York while integrating digital and offline efforts; abandoned its online pay wall to lure more visitors; placed new emphasis on events including the Aspen Ideas Festival; and commissioned a magazine redesign.

Now the Britney cover story is bound to attract new attention to The Atlantic. The magazine maintains that the issue's editorial is not driven by Mr. Smith's ambitious five-year business plan, the redesign or any of the rest -- but it arrives at a time when The Atlantic's pages and newsstand sales are down, while celebrity titles are still going stronger than any magazine category.

James Bennet, editor of The Atlantic since March 2006, said the Britney cover flows from the same rich artery as every Atlantic piece, and not just the Marilyn Monroe or Humphrey Bogart stuff from decades back. He also meant cover packages such as the exploration of possible pre-Viking contacts between the Old and New Worlds or the 1999 cover story on new theories of infectious disease.

"We are focusing The Atlantic really on what it does best, I think -- which is bringing its intelligence to bear on really important subjects, the most significant subjects in politics, business and the broader culture -- and making provocative arguments," Mr. Bennet said.

The title has undoubtedly caught new wind lately with high-impact pieces such as last December's "Why Obama Matters" and the March issue's "Marry Him," about settling for "Mr. Good Enough." The Britney feature, for its part, is a serious look into her hangers-on and the businesses that they build on her back; if it happens to help reverse The Atlantic's recent 5.4% decline in newsstand sales, so much the better.

But will core readers and advertisers stay true?

This is the question for magazines on the remake. The answers, especially amid the broader media-world transformation, can be brutal.

Britney is "not anything that would interest me," said Richard Adin, 60, a Poughkeepsie, N.Y., business owner who said he's read The Atlantic for about a decade and holds, as the title confirmed, a subscription through 2016. "If I were looking at it on a newsstand I wouldn't buy it. It's bad enough when Britney takes up space in my New York Times."

Reader's Digest, another venerable brand, recently tested its longtime readers with a new logo, the first back-cover ads in 85 years and a design intended relate to younger readers. Nothing was done casually. "We carefully considered the reaction of our many older readers, because they're valuable to us," said Eva Dillon, president and group publisher. "Once you become accustomed to something, you don't like to see it change."

Rishad Tobaccowala, the ad guru in charge of the Denuo Group, said he trusts The Atlantic to handle pop well. "I believe it's in their core wheelhouse," he said. "But over time it's also consistent with them making their magazine current and compelling with today's trends."

Magazines' covers are still their most public face, however, so Britney's prime Atlantic position will draw notice from several sides. When Howell Raines was executive editor at The New York Times, many reporters resented his push for more pop-culture news, such as the front-page Britney feature "Schoolyard Superstar Aims for a Second Act, as an Adult" in October 2002. Even Vanity Fair, a magazine explicitly fascinated by stars and starlets, caught darts when it put Paris Hilton on the front.

The Economist has made its feeling on Britney covers clear: harrumph. "If she re-emerged as the head of the World Bank, we'd consider it," Editor in Chief John Micklethwait joked last month in a MarketWatch column lauding his magazine's sober judgment.

The Britney piece easily meets Atlantic editorial standards, said Mr. Smith. But its pop-culture hook happens to be relevant to the magazine's new aims, such as that hoped-for return to profitability or even simple ad-page growth.

"We think the brand's relevance has a broader appeal than the current footprint," said Mr. Smith. "You could argue that doing a story on the celebrity economy and the new paparazzi economy is a broadening of the footprint."

Here's hoping Mr. Adin, the Atlantic subscriber, continues to find what he likes -- despite Britney's April beachhead. "If it's one issue, I don't care," said Mr. Adin. "If this is the new direction, they may as well just call themselves one of Rupert Murdoch's tabloids."