The YouTube network that kicked off a flurry of online-video-network acquisitions a year and a half ago has now added a new backer -- and with it, plans for a new revenue stream.

If the original DreamWorks Animation deal for AwesomenessTV was about bridging the traditional and digital-video worlds, this latest deal appears to center partly on how to best make money from digital video. That doesn't mean just advertising.

"I think that our individual creators have an opportunity to deliver their content directly to their audience behind a paywall and that they will pay for the content that they're passionate about," AwesomenessTV CEO and Founder Brian Robbins said. "We see that as a big opportunity."

To date AwesomenessTV has had two revenue sources: advertisers and other media companies.

Brands such as Royal Caribbean and Subway took notice of AwesomenessTV's network of YouTube channels, which include stars like Tyler Oakley and the Cimorelli sisters, and signed sponsorship deals. Others have simply bought ads against the more than 114 million subscribers and 800 million views AwesomenessTV's network claims to attract each month. The network notched 6.5 million unique desktop viewers in the U.S. in October, which was an 18% rise from last year, according to comScore.

Various media companies, such as Nickelodeon and Hearst, have recognized AwesomenessTV's knack for producing programming teens and tweens love and paid the network to produce shows for their properties. AwesomenessTV has created a TV show and made-for-TV movie on Nickelodeon. And Awesomeness has produced videos for Hearst-owned Seventeen magazine's relaunched YouTube channel and set up a network of YouTube channels from the publication's fans.

Despite all of those dealings, AwesomenessTV, like most online video networks, has yet to strike it rich.

AwesomenessTV has generated $30.2 million in revenue for DreamWorks Animation since the acquisition closed last year and through the third quarter of this year, according to the parent company's regulatory filings. In the most recent quarter, AwesomenessTV's revenue grew by 57% to $5.5 million. That's a drop in the bucket compared to the $142.4 million the studio made from feature films during that period.

But DreamWorks Animation's acquisition of AwesomenessTV -- as with Disney's deal for Maker Studios, Otter Media's for Fullscreen and RTL Group's for StyleHaul -- was never about immediacy but potential. DreamWorks Animation CEO Jeffrey Katzenberg said earlier this year that the feature-film business "is not a growth business." And he's been very outright in saying that digital distribution is a growth business. These online-video networks are considered to be ushering in the future of entertainment, and the traditional entertainment giants don't want to be left behind. Neither does Hearst.

In July of this year Hearst debuted its digital video arm, Hearst Digital Studios, in a bid to catch up to Conde Nast's 21-month-old Conde Nast Entertainment. At the same time, Hearst said it had developed technology to sell subscriptions to its video content a la Netflix or HBO. That streaming-video subscription business premiered with CosmoBody, a $9.95-a-month fitness channel that streams workout videos through a browser site and mobile apps for devices running Apple's iOS and Google's Android operating systems.

Now Hearst will look to extend that subscription business to AwesomenessTV. Here's what Awesomeness TV founder Mr. Robbins had to say about the future in this edited transcript. 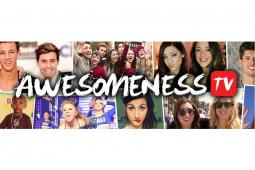 Brian Robbins: Over the last year and a half, our partnership with DreamWorks has been really amazing for us. Jeffrey Katzenberg's investment in the company -- not only financially but [in] time and resources -- has really helped accelerate our growth in many different ways. What the Hearst investment in Awesomeness means is that we're going to hopefully be able to continue that growth and expand into different areas that we want to move the company into a full-fledged media company.

Ad Age: Whose decision was it to sell a stake to another company, and why was that decision made?

Mr. Robbins: We, Awesomeness, have been operating in partnership with Hearst for the Seventeen YouTube channel for about the last year and change. So we've been developing a relationship with those guys. They're great people. They're great partners. So that's sort of where it first started. And separately Jeffrey and [Hearst CEO] Steve Swartz have known each other over the years and been talking about doing certain things together. And personally for me, I look at what we've built here at Awesomeness and always set out to build a brand not unlike what happened in the beginning of cable, right? So cable came along 30 years ago, and CNN and MTV and ESPN were born on the back of that cable boom. Well, Hearst was there then. They own a 20% stake in ESPN [and own] part of A&E and Lifetime and History. So I look at them as great partners to help us continue to grow and go to the next level.

Ad Age: What is that next level?

Mr. Robbins: We have a lot of things we want to do. [Hearst] has built an [subscription video on-demand] platform that we want access to that we think can accelerate our ambitions in that area. We also have big international expansion plans next year to move into a lot of countries around the world that we already have a lot of traffic in and channel partners in, but we want to have boots on the ground in those countries in production facilities and ad sales. These are just a small example of what we're going to do together.

Ad Age: You mention their subscription platform. As far as I know Awesomeness has two revenue streams: advertising and content production/licensing. Subscription would be a new one. What are your plans for setting up a paywall?

Mr. Robbins: It's still being formed. But if you think about Awesomeness and more importantly our creators -- some of our top-tier talent have really unique relationships with their audience. They really have superfans that will do anything. And we think delivering content directly to our audience and our partners and top talent's audience will be a big part of our business down the line.

Mr. Robbins: That company called HBO. That little company. Subscription video on demand is the word of the year, right? It's not that new of a concept really. It's just I think that brands and talent more importantly -- and that's where I think we're different. I think that our individual creators have an opportunity to deliver their content directly to their audience behind a paywall and that they will pay for the content that they're passionate about. We see that as a big opportunity.

Ad Age: Is there also a challenge you will have to tackle given who your audience is? I imagine for them to subscribe they'll have to go ask to borrow their parents' credit cards.

Mr. Robbins: Welcome to my life. It's no surprise that kids are already huge consumers of content on iTunes. They download and buy more music and movies than anybody and are already active in this. So yes, there is friction. I'm not going to lie to you; there is definitely friction that you have to sort of solve to get the best conversion. But we just know that our audience -- this teen audience -- is very passionate about the talent they follow. And we think we want to be there to deliver them.

Ad Age: How are you thinking about a subscription tier in relation to what you already have set up with the free ad-supported YouTube channels?

Mr. Robbins: Too early to tell. Nothing's fully baked where I can tell you, "Here's our plan. Here's our rollout. This is how we're going to divide the content." Or anything like that. It's really early days. I'm not saying you're going to see us launch a subscription channel in January. But soon, for sure.

Ad Age: Are you also looking at other subscription services. Vessel's out there, and I know they're signing deals with just about everyone. Do you have deals in place with Vessel?

Mr. Robbins: No. Some of our talent is doing deals with Vessel, for sure. But we want our content everywhere. The good news is we have really built a brand with Awesomeness. We're a content company first and foremost. We're not a technology company. And it's a good time to be in the content business and have a brand with a real specific audience. We don't want to be beholden to one distribution platform.

Ad Age: Speaking on content and going back to Hearst, you've worked together on Seventeen's YouTube channel and network. What's possible now that you have this new deal in place that wasn't possible before? What does it open up?

Mr. Robbins: I think having them being partners we gain access. That doesn't mean we automatically get [intellectual property]. But I think that if we see opportunity to create business with some of the Hearst brands, I think they're going to be very open to it. Our relationship with Seventeen was just the beginning of that. And I think you'll probably see some more of that. But I think what Hearst is really interested in is they're making an investment in us because they're hoping that we really are that media brand of tomorrow, in the same way they invested in ESPN all those years ago.

Ad Age: Does this more formalized relationship with Hearst open up any new opportunities for advertisers?

Mr. Robbins: If new intellectual property is created and we come together to do that, that's where the opportunities will exist. I will tell you that we are interested in starting other verticals in other demos other than our core teens and tweens. And I think Hearst will play a big part in that.

Ad Age: Any demos you're looking at as more of an immediate priority?

Mr. Robbins: I can't say because then someone else is going to do it.