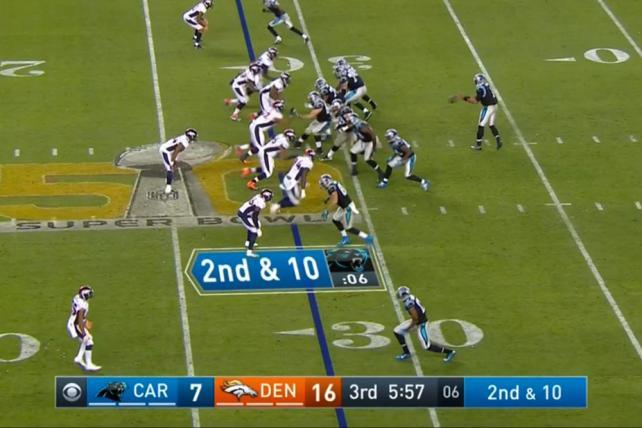 Super Bowl 50 host CBS was the only Big Four net that scored in February, averaging a 3.4 in the all-important 18-to-49 demo.
Credit: NFL Productions LLC

On the eve of what ad sales executives believe will be the strongest upfront in several years, broadcast's supply of ratings points is demonstrating downright Costanza-esque shrinkage.

According to Nielsen C3 data for the month of February, broadcast primetime ratings in the crucial 18-to-49 demo were down 12% versus the year-ago period, while cable losses were far less dramatic (-3%). Altogether, the Big Four networks averaged an aggregate 7.8 rating in the demo, down from an 8.9 in February 2015.

As one would expect, Super Bowl 50 host CBS enjoyed a stellar month, averaging a 3.4 in the 18-to-49 demo, which marks an 89% improvement versus the 1.8 C3 rating it delivered a year ago. (CBS makes ratings guarantees to advertisers based on its performance among adults 25-54, but given that ABC, NBC and Fox rely on the 18-49 turnout, the younger demo offers a more coherent basis of comparison.)

On the other end of the continuum, NBC took a 63% hit thanks to tough comps against February 2015, when it broadcast Super Bowl XLIX. The Peacock last month drew a 1.2 C3 rating among adults 18-49, which constituted a 63% drop versus a 3.2.

While Fox and ABC did not weather any undue Super Bowl-related deflations, both networks still took it on the chin in February. ABC slid 19% to a 1.7 C3 rating, while Fox tumbled 19% to a 1.3 in the dollar demo. ABC's ratings were impacted by underwhelming Oscars deliveries and some headwinds on Thursday and Sunday nights. Fox, for its part, suffered from a dearth of GRPs tied to its hip-hop drama "Empire." Last season, the musical aired from Jan. 7 to March 18; this year, Fox opted for a gap schedule, bowing "Empire" in the fall for a run of 10 episodes before remanding it to a four-month hiatus. ("Empire" returns March 30. Hiatuses are bad, m'kay?)

Incidentally, while the networks like to chirp that live-same-day ratings are no longer an accurate reflection of a given show's ability to deliver for its advertisers, the Nielsen data would suggest otherwise. CBS enjoyed the biggest lift from live-same-day to C3, growing from a 3.2 to a 3.4, while NBC and Fox both inched up a mere tenth of a point upon application of the currency data. ABC showed no change.

That said, certain individual shows win back a good deal of lost ad impressions upon conversion to C3. Unfortunately for Fox, the TV series that enjoys the greatest improvement when toggling from L+SD to C3 sat out the entire month of February. And yes, we're talking about "Empire" again.

The currency against which the vast majority of TV ad transactions are made, C3 blends a very rough estimate of average commercial ratings with three days of time-shifted viewing; as such, it offers networks, buyers and marketers the best approximation of actual ad deliveries. Or, to put it more plainly, C3 (and increasingly C7) are quite literally the only relevant ratings data. While the networks do not make the currency data public, favoring instead the stats-padding live-plus-three-day and live-seven numbers that omit commercial deliveries altogether, the only ratings that matter to advertisers are C3/C7.

If the networks would obviously like to have far more ratings points to sell in this year's upfront, the basic supply-and-demand principles that inform the market tend to reward underdeliveries. If demand is up -- and it will be; with scatter premiums up as high as 20% at several networks, clients simply won't be able to afford to hedge their bets in the 2016-17 bazaar -- and supply remains restricted, pricing will be up in the low double digits (say, +10% to +12%) by June. It only sounds counterintuitive.