Nothing But Net: TNT Sells Out NBA All-Star Weekend 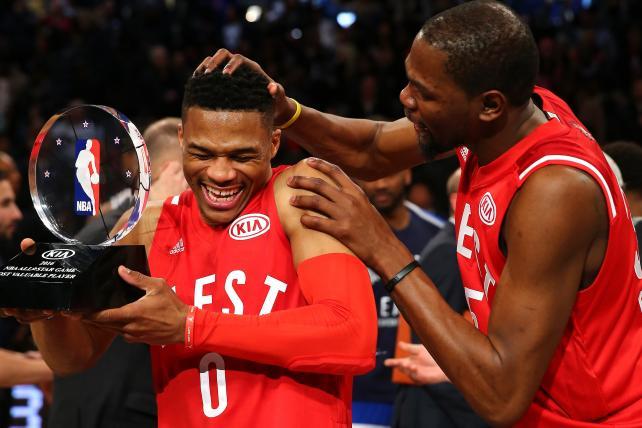 If you're a marketing exec at, say, an auto manufacturer, movie studio or insurance provider and are hoping to buy a zero-hour commercial unit in TNT's upcoming telecast of the 2017 NBA All-Star Game, you're pretty much out of luck. For the third year running, the Turner Sports ad sales team has sold out the midwinter hoops expo well in advance of the opening tip-off, a feat that speaks both to the seemingly inexhaustible demand for the NBA's younger, hipper audience and a sports market that continues to cast a long shadow over the rest of the TV space.

According to Turner Sports Exec VP-Ad Sales Jon Diament, Sunday night's scrimmage sold out even earlier than last year's telecast, which at the time was TNT's most lucrative in its 14 years of carrying the game. In fact, the entire slate of All-Star Weekend programming, which includes Saturday night's three-point shootout, slam dunk contest, and amateur three-on-three tourney, has been picked clean by advertisers.

"This is the third year in a row we've been in a sold-out position on all three nights, and a lot of that has to do with the caliber of the event," Mr. Diament said. "Advertisers are clamoring for high-profile, live sporting events, and All-Star Weekend is a great environment to roll out new activations."

To be sure, some of the accelerated sellout is a function of longstanding commitments made by the NBA's official marketing partners, a lineup that includes the likes of Kia, Verizon, State Farm, Taco Bell, Samsung, Gatorade, American Express, BBVA Compass and Mountain Dew. Mr. Diament estimates that between 50% and 75% of All-Star units are sold during the upfront as part of multiyear deals with league sponsors, leaving the remainder for first-timers who buy in scatter as well as a number of activations keyed to the weekend.

Per iSpot.tv estimates, TNT booked north of $26.5 million in ad sales revenue during last year's All-Star Weekend, with the main event generating nearly 60% of the total haul. While in-game pricing varied according to each advertiser's individual commitment, buyers said the average cost for a 30-second spot in the 2016 exhibition worked out to around $250,000 a pop.

Among the advertisers who have bought All-Star Weekend inventory for the first time this year are Adobe, Hulu and the snack purveyors Jack Link's and Mondelez. Adobe's marketing is about as NBA-friendly as it gets; according to iSpot data, since the season began back in October, the company's relatively limited ($1.06 million) national TV spend has been earmarked exclusively for TNT's "Inside the NBA" studio show and in-game coverage. Meanwhile, the weekend telecasts will mark the first pro hoops buy of the season for Jack Link's, which has invested a good deal of its TV budget in college football games, NFL shoulder programming and animated series like "South Park," "Bob's Burgers" and "Family Guy."

Most of the tent pole sponsors will be familiar to anyone who has made the high-scoring hoops spectacle a staple of their February TV diet. For the seventh time in as many years, Kia will serve as the All-Star Game's presenting sponsor; the automaker will also return as the linchpin of the "Inside the NBA" postgame show and its logo will again find its way onto the front of the players' jerseys. American Express, which in Oct. 2015 reached a deal to serve as the exclusive presenting halftime sponsor of TNT's regular-season and playoff coverage, will step up for its second All-Star Game post, while longtime Turner partner AutoTrader will continue to light the way as the tip-off sponsor.

The State Farm All-Star Saturday Night lineup returns largely intact, as Verizon will present the slam dunk contest and Taco Bell once again will back the big men vs. guards skills contest. Meanwhile, in the wake of Foot Locker's decision to not lace up for its 14th straight All-Star Weekend, audio brand JBL steps in as the presenting sponsor of the three-point contest. Among the sharpshooters lined up for that event are defending champ Klay Thompson of the trey-happy Golden State Warriors and 2013 winner Kyrie Irving of the Cleveland Cavaliers.

The NBA's newest sponsor, Jack Daniel's, officially activates its partnership with the league with an onsite hospitality and experiential event, while other activities in and around the Superdome will be sponsored by American Express, Mountain Dew and Tissot.

Onsite activations were made all the more attractive when the NBA announced it was relocating All-Star Weekend from its original venue in Charlotte down to New Orleans. The league moved the event after North Carolina legislators passed the controversial House Bill 2, an anti-LGBT measure also known as the Bathroom Bill. At the time NBA commissioner Adam Silver made the shift official, marketing consultants said they felt that the decision was not only in keeping with the league's anti-discrimination ethos, but that it would neatly side-step the sort of protests and social-media agitation that would threaten to overshadow any high-profile sponsorships in Charlotte.

Mr. Diament said that a number of sponsors are prepping new spots featuring NBA talent, but unlike those who buy time in a certain top-tier football game, All-Star advertisers tend to want to keep their creative under wraps until it's showtime. "Because their faces aren't hidden under helmets, and because they're really part of the culture, the NBA is chock-full of stars that are highly recognizable, guys like Steph Curry and LeBron [James]," Mr. Diament said. "So to have the opportunity to align one of the best players in the world with your brand in front of all these highly attractive demos … well, if it works for your calendar, it's hard to pass up."

While the NBA's mid-season celebration isn't literally the only game in town -- among the smattering of Sunday night sporting events include a Bruins-Sharks game on NBCSN, a set of UFC preliminaries care of FS1 and some college hoops and NHL action on the RSN level -- it will all but certainly prove to be the evening's biggest draw. The game has been the very model of consistency, drawing a 4.3 household rating in each of the last three years while delivering between a 3.1 and a 3.3 rating among the adults 18-49 crowd.

Surefire ratings clout aside, the All-Star Game attracts a crowd of young, hard-to-reach, socially aflutter consumers who spend their discretionary income on sneakers, movies, liquor, consumer electronics, car rentals and smartphones. Nearly 45% of all NBA viewers are age 35 and under, making them the country's youngest major-league sports constituency, and the audience is by far the most diverse.

In terms of what fans can look forward to in this particular game, the primary story line involves the bad blood between former teammates Russell Westbrook and Kevin Durant, who will suit up for the Western Conference. (Mr. Westbrook, a two-time All-Star MVP, was inexplicably left off the starting five, but he should see plenty of time as an alternate.) The big question going into Sunday's showdown is if coach Steve Kerr will put the feuding stars on the court at the same time or instead look to avoid any potential conflicts by benching one while the other is active.

The All-Star Game will also give many fans their first look at Milwaukee's gravity-defying, lightning-fast 6' 11" point guard Giannis Antetokounmpo, while the Knicks' similarly freakish Kristaps Porzingis (the lone bright spot in yet another unendurable season for New York) could grab a whole lot of bonus floor time now that Kevin Love has been sidelined with a knee injury.