The Big Machine Behind 'Nashville'

Despite shaky ratings that have marked the end of countless primetime dramas in the past, ABC's fall entry "Nashville" was recently picked up for another season. Whom might it have have to thank? 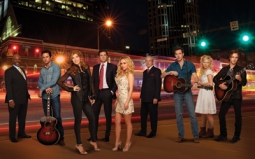 His name is Scott Borchetta.

As Big Machine Label Group president-CEO, Mr. Borchetta has the reputation of a betting man in the country-music industry. A race-car-driver-turned-record-executive at Dreamworks, Mr. Borchetta is known for discovering and betting big on the musical talents of many of country music's biggest stars, including those of a curly haired blonde girl now known by the world as Taylor Swift.

He got the attention of many earlier this year when he rolled the dice on "Nashville," entering into a partnership that would not only provide original song content for the show and its stars but offer up Big Machine artists to be featured indirectly in the storyline. "We were determined to find a production team and director that we could really align with, and when we watched the pilot and watched how the music was going to be woven into the characters, we knew this was the opportunity we have been looking for," Mr. Borchetta told Ad Age shortly after the show's premiere.

Since then, over 500,000 digital downloads from the series have been sold. And on the same day "Nashville" was picked up for another season by ABC, Mr. Borchetta and his team announced the Dec. 11 release of a soundtrack of original music from the show, featuring the real-life talents of cast members such as Connie Britton, Hayden Panettiere, Charles Esten, Jonathan Jackson, Clare Bowen and Sam Palladio, most of whom perform in each episode.

Thirteen songs were featured in the premiere episode alone, including music from Big Machine artists Eli Young Band, Justin Moore and Eden's Edge. Yet, it just might be the accessibility to its vast catalog of original music that could put the still-delicate "Nashville" franchise over the top. Big Machine released the first official single and accompanying video titled, "Telescope," (sung by Ms. Panettiere, aka "Nashville's" Juliette Barnes) to country radio a few weeks ago and the song has already reached the top 40, with nearly 50,000 digital downloads.

The stars are also doing live shows at that Nashville institution the Grand Ole Opry. Charles Eston performed there last week, and Clare Bowen and Sam Palladio are to perform there Nov. 17, signing copies of the soundtrack album afterward.

No one seems to know if "Nashville" will live up to the level of the still-expanding and worldwide success of a brand such as Fox's "Glee." Yet, a recent report by the Country Music Association shows that 42% of Americans consider themselves country-music fans, and 43% of adults who identify themselves as brand loyal are country music fans, more than any other genre of music. Mr. Borchetta is now making plans to take Ms. Panettiere on a tour of radio stations across the country to tout the song, and indirectly the show.

Tricia Despres
View all articles by this author