In Locking In a Big Ten Deal, ESPN and Fox Claim the Last Big Rights Prize
READ THIS NEXT
Watch David Dobrik weep as an old man in video for Dispo, his photo app that banks on nostalgia 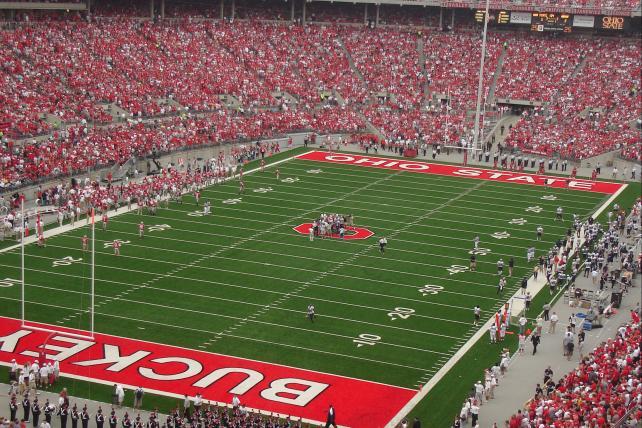 The lawyers are still poring over the deal points, but a new media rights package for the Big Ten Conference has been locked in through the end of the 2022-23 academic year, people familiar with the situation confirmed.

While the $2.65 billion price tag suggests that the sports rights bubble shows no sign of bursting, the broader takeaway is that the feverish sports dealmaking that informed the last few years will now subside. For all intents and purposes, there are no more major sports portfolios left to be acquired. The cupboard is bare and will remain so through the start of the next decade.

As was first reported by SportsBusiness Journal, ESPN and Fox Sports will divide 50 football games and another 100 conference basketball games among themselves, with Fox retaining the rights to the Big Ten championship game and getting first dibs on the most desirable matchups. Odds are, Fox will move to snatch the annual Ohio State-Michigan grudge match away from ABC, which has been the broadcaster of record for the rivalry since the late 1960s. (Here's what a big deal the Buckeyes-Wolverines showdown is: Despite a 42-13 blowout in Michigan's Big House, last year's game was the most-watched noon college football broadcast in 18 years, drawing 10.8 million viewers and a 6.4 household rating.)

Fox, which owns 51% of the standalone Big Ten Network, began zeroing in on its hunk of the conference's rights package back in April. (Fox will shell out around $240 million per year for its piece of the Big Ten pie, SBJ reported.)

After placing a lowball bid earlier this spring, ESPN stepped up to sustain its 50-year relationship with the Big Ten when word of the Fox discussions began swirling, upping its commitment from the $150 million it will pay in each of the last two years of its current contract to $190 million for the new deal, which activates in fall 2017.

While people familiar with the deals confirmed that the terms largely have been hashed out, some requisite dotting of Is and crossing of Ts has to be done before everything is official. Big Ten commissioner Jim Delany is said to be eager to have all the paperwork out of the way in time to make a formal announcement at the conference's 45th annual football kickoff luncheon, which is set to take place on Tuesday, July 26, in Chicago's McCormick Place Convention Center.

What's left?
Once the legal niceties have been put out of the way, no other substantive sports packages will be up for bid on the open market. The $24 billion NBA rights (Turner/ESPN/ABC) are locked in through the end of the 2024-25 campaign, the network NFL packages (CBS/Fox/NBC) have been nailed down through 2022, Major League Baseball (Fox/ESPN/Turner) is sorted out through 2021, and the NHL isn't parting ways with NBC Sports until 2020 at the very earliest (if at all). Meanwhile, NBC two years ago forked over $7.65 billion to extend its Olympics rights deal through 2032, Fox Sports and Telemundo will air the men's and women's FIFA World Cup through 2026, and NBC will remain the home of the English Premier League until the 2021-22 season wraps.

Also not going anywhere any time soon is the $7.3 billion College Football Playoff, which ESPN has dominion over through January 2025, and the NCAA Div. I Men's Basketball Tournament, a joint venture of CBS and Turner that is staying put until 2032.

As it happens, the Big Ten's new rights deals will lapse before the other Power Five conferences will have to negotiate their own media packages. The Fox/ESPN Pac-12 pact isn't set to run out until spring 2024, the Big 12 rights (ESPN/Fox) have been secured through 2024-25, ESPN's ACC accord has another 11 years left on the warranty and the SEC's CBS/ESPN compact will endure through 2034.

In short, there's very little premium sports content that is anywhere near its sell-by date, which leaves pretenders to the ESPN sports throne having to make do with the rights they currently control. For FS1, that adds up to a relatively robust slate of college football and basketball action, as well as MLB games, Nascar racing, soccer and UFC battles. NBCSN has the NHL, the EPL, Nascar, the Tour de France and rugby, while CBS Sports Network, which hasn't shown much interest in trying to out-bid its cable confreres, gets by with a roster of decidedly niche offerings (arena football, professional bull riding, motocross, softball).

While ESPN will pay approximately $40 million more for its Big Ten rights under the terms of the new contract, the network isn't going to automatically pass the buck to its advertisers. "Usually, when networks renew and there's an inevitable step-up in their fees, they don't just go ahead and jack up the the cost of ads to try and balance things out," said one national TV buyer. "The values for the sports properties are aleady well established; if anything, they start making their money back when they go in to re-negotiate their carriage deals" with pay-TV distributors.

When pricing does escalate, it's generally a function of the time-honored supply-and-demand model. "Advertisers are willing to pay a premium for sports, because they recognize that, at its core, sports not only delivers a passion-based experience and a uniquely engaged audience -- and, by the way, they're watching the ads -- but it's also, let's face it, the last real reach vehicle," said the buyer. "You have some of the biggest programs in college sports, which is itself this insanely tribal phenomenon, and you're going to pay more because the demand for that audience is so high and the ratings are what they are, and I'm not telling you anything you don't already know, but most of the general entertainment stuff just isn't working."

Moreover, the sports rights hustle is now as much a matter of starving out the other guy as it is stocking one's own larder. "Two years ago, ESPN and TNT paid a premium to keep Fox and NBC out of the NBA," the buyer said. "Obviously a lot of that had to do with the huge numbers they see at the end of the season, but there's no question they wanted to shut out the competition from what was going to be the last big deal in a long time."

Exclusivity doesn't come cheap. When the new NBA deal tips off in the fall, the collective rights fee will jump from $930 million per year to a princely $2.66 billion, a sum that frankly makes the Big Ten haul look like so much chicken feed.

If the last of the premium sports content seems to be spoken for now that the Big Ten is closing in on its new contract, there are a smattering of other intriguing properties that may become available within the next two or three years. Fox's seven-year UFC deal expires in the summer of 2018, and CBS and TNT's rights to carry the PGA Championship, the golf season's fourth and final major tournament, run out in 2019.

Lastly, as the two-year "Thursday Night Football" deal that divvies up 18 NFL games across legacy rights holders CBS and NFL Network and newcomer NBC kicks off this fall, it remains to be seen how that particular property will continue to evolve. That goes double for Twitter, which in April snared the streaming rights to 10 of the prime time games for the low, low price of $1 million a pop.