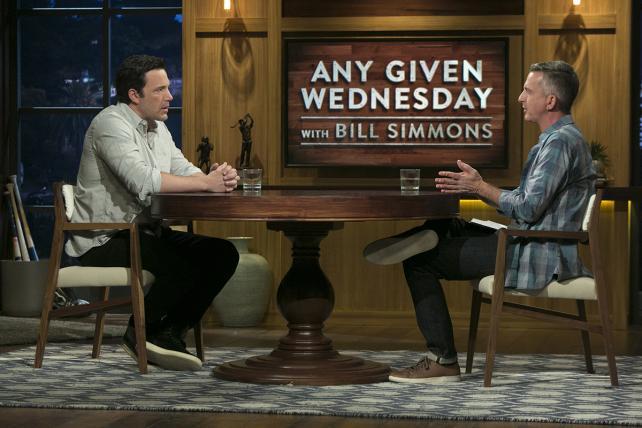 Ben Affleck and Bill Simmons on the premiere of 'Any Given Wednesday.'
Credit: Jordan Althaus/courtesy of HBO

With a social media presence that includes more than 5 million Twitter followers and 10 times as many podcast subscribers, Bill Simmons would seem to have a built-in audience for his new HBO show "Any Given Wednesday." Trouble is, it would appear that only a fraction of those digital devotees are tuning in to watch on TV every week, although the overall turnout improves dramatically when the network's various alternative platforms are factored in.

According to Nielsen live-plus-same-day data, through its first six installments, "Any Given Wednesday" is averaging just south of a quarter-million viewers -- 249,833, to be precise. And while demographics aren't entirely germane to HBO, which as a premium cable network does not court the favor of advertisers, Mr. Simmons' chat show is drawing a paltry 0.12 rating, which means that slightly more than half (152,172) of those tuning in are members of the adults 18-to-49 set.

But live-same-day ratings only tell about 10% of this particular ratings story. HBO insiders say "Any Given Wednesday" improves on its original live deliveries by a factor of 10 when DVR playback, encore telecasts, on-demand views and HBO Now streams are baked into the mix, bringing the average weekly total audience to around 2.4 million viewers -- a lift that is nothing short of remarkable.

By way of comparison, when "Last Week Tonight's" time-shifted/digital ratings are rolled up with its live-same-day ratings, the average delivery jumps from around 1.13 million viewers per episode to 5.6 million.

If getting crushed by ESPN's afternoon panel shows must rankle the famously competitive Mr. Simmons -- Wednesday's "Pardon the Interruption" scared up 561,000 viewers, more than double that of "Any Given Wednesday," while lead-in "Around the Horn" drew 390,000 viewers -- the comparisons to his old stomping grounds may be a bit unfair. After all, ESPN has more than twice the combined reach of HBO and its HBO Now streaming service, and as HBO Chairman and CEO Richard Plepler suggested earlier this week during Time Warner's quarterly earnings call, Mr. Simmons' inherent value may well lie beyond the bounds of linear TV.

"[Subscriber] churn is going down all the time, and we couldn't be more pleased as more and more content suited to digital arrives," Mr. Plepler said. "Jon Stewart is coming, Vice News is coming, [and] Bill Simmons is obviously very conducive to it."

About that. No one who's followed his career closely can question Mr. Simmons' digital bona fides; in its first seven months of operation, his new eponymous podcast was downloaded more than 50 million times. But the initial attempts to repackage the "Any Given Wednesday" segments for a digital audience have been met with decidedly mixed results. In aggregate, the 32 clips on the show's YouTube page have been viewed 4.61 million times, although half of those impressions were generated by a single snippet. (The premiere episode's infamous 19-f-bombs-in-five-minutes Q&A with aggrieved Patriots fan and unapologetic potty mouth Ben Affleck has been viewed 2.34 million times since it was uploaded to YouTube in June.) Take the excitable Deflategate conspiracy theorist out of the picture and the average "Any Given Wednesday" clip is averaging a little more than 73,000 views.

The digital deliveries can't hold a candle to those generated by HBO's other weekly half-hour current events show, "Last Week Tonight with John Oliver." Since Mr. Simmons' show launched on June 22, new clips housed on the "Last Week Tonight" YouTube page have been viewed no fewer than 81.6 million times, with the single biggest attraction, a predictably lacerating demolition of Brexit, notching 12.3 million views.

Speaking of "Last Week Tonight," the first six episodes of Mr. Oliver's splenetic program effectively quadrupled the initial "Any Given Wednesday" deliveries, averaging 1.05 million viewers back in the spring of 2014.

While "Any Given Wednesday" isn't HBO's lowest-rated series -- that dubious distinction currently goes to the Simmons-produced "After the Thrones," which averaged around 210,000 live-same-day viewers over the course of its 10-episode run -- the network already has begun making changes to the show's format. This week, Mr. Simmons delivered his opening monologue as a voiceover, rather than an on-camera fourth-wall buuster, and during the July 27 episode, he kicked the tires on a sketch comedy segment. (At seven-plus minutes, the latter experiment felt like one of those interminable, swooningly unfunny "SNL" sketches that kills in rehearsal but leaves viewers at home clutching their skulls in astonishment.)

Again, the end goal seems to be using the show as a means to help boost adoption of HBO Now. Time Warner Chairman and CEO Jeff Bewkes told investors Wednesday that the company is "looking to super-serve the audience by introducing new content geared for our digital and on-demand platforms, and that started with the debut of Bill Simmons' 'Any Given Wednesday'" But if the linear ratings don't improve dramatically by the time Tom Brady returns from his four-game suspension in early October, HBO likely will ask for more substantive changes.

For his part, Mr. Simmons admits that the show is a work in progress. "I think we have the bones of something I really like," he said during the June 24 installment of his podcast. "We'll know by episode 10 what the format is for good, but right now we're going to try some things. It's been a blast to work on."

In the near term, HBO can give "Any Given Wednesday" a better shot at building a live audience by furnishing it with stronger lead-ins. On June 29, when the show earned its highest rating with an average audience of 362,000 viewers, HBO had paired it with the 2015 comedy/Masshole valentine "Ted 2." The Seth MacFarlane flick drew 521,000 viewers, providing "Any Given Wednesday" with its biggest lead-in to date. Conversely, when Mr. Simmons' show slipped to a series low 163,000 viewers on July 27, it followed the 2014 Farrelly brothers dud "Dumb and Dumber To" [sic], which eked out just 154,000 viewers.

"Any Given Wednesday" may have a chance to reach its biggest audience next week, when it leads out of the Oscar-nominated NWA biopic "Straight Outta Compton."