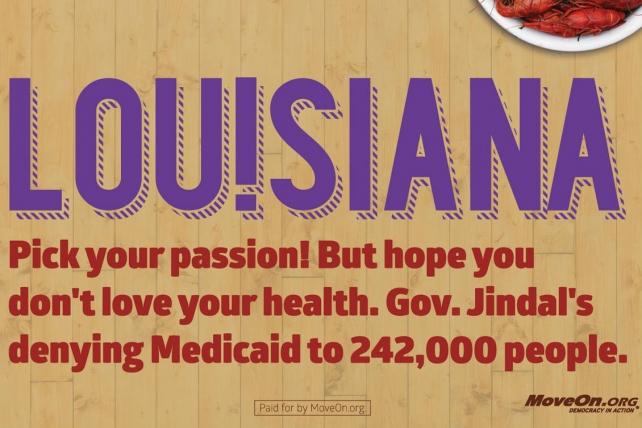 With an increasing number of politicians, advocates and third-party groups flooding a never-ending election cycle, political players are turning to an old-school solution to avoid the clutter and expense of TV advertising: the billboard.

The Outdoor Advertising Association of America, citing an analysis of Kantar Media data, says political ad spending on outdoor advertising grew 13.3% between the 2009-2010 election cycle and the 2011-2012 cycle.

"All of the early signals show this is going to be of significant interest in this campaign cycle," Mr. Jacobs said.

While he said it's too soon to project how much revenues will come from political ads, Clear Channel Outdoor has recently created the position of director of advocacy and political advertising to serve an expected rush of new clients. It hired Whitney Tipton, the former advertising director for the Daily Caller, to fill the job.

These days, the billboard allows political groups to do more than just post a photo and a slogan. With the advent of digital billboards, they can now tailor messages and respond to the news cycle.

The National Republican Senatorial Committee has used billboards to attack Rep. Bruce Braley, an Iowa Democrat running for the Senate and Sen. Kay Hagen of North Carolina, one of the most vulnerable Democrats seeking re-election in the Senate.

Earned media
Another "benefit of these digital billboards is that they produce a lot of earned media" or free publicity in local newspapers and TV stations, said NRSC spokeswoman Brook Hougesen. "I think it's one of the tools that can be used in a campaign."

She also said buying billboard space is a cost-effective way to attack Democrats. "We might run more in the future."

Meanwhile Mr. Braley is holding off on using billboards in his campaign.

"Never say never on anything, but I don't think there are any immediate plans to do so," said Braley campaign manager Jeff Giertz.

Another GOP group, Americans for Prosperity, has also run billboard campaign against Ms. Hagan, attacking her stance on the issue of carbon emissions taxes.

In Louisiana, Moveon.Org and the administration of Republican Governor Bobby Jindal are squabbling over a billboard that Moveon is using to attack Mr. Jindal's health-care policies.

The billboard reads: "LOU!SIANA Pick your passion! But hope you don't love your health. Gov. Jindal's denying Medicaid to 242,000 people." (The state says the issue isn't with the political content of the sign, but rather that Moveon has used Louisiana's "Pick Your Passion" tourism slogan. Lieutenant Governor Jay Dardenne sent a cease-and-desist letter to MoveOn on Thursday, according to Nola.com.)

Ads on billboards and other outside spaces have popped up all over Washington D.C., touting the government of Canada, criticizing the Humane Society, opposing cuts in AIDS research, lauding Edward Snowden and complaining about the national debt.

Stephen Freitas, chief marketing officer for the Outdoor Advertising Association of America, said billboards are becoming more popular in the worlds of politics because of the birth of the super PACs and their huge infusion of money into campaigns.

Mr. Freitas also said billboards offer an attractive alternative to TV, which he says is "saturated" with political ads.

Billboards can also be localized and targeted, Mr. Freitas said. And the 4,800 digital billboards in the United States can change their message instantly.

Mr. Freitas said "out of home" advertising is evolving and seen more and more frequently in public places besides the side of the highway, including bus shelters, shopping malls, airports and even atop taxi cabs.

"There's a lot of shapes and sizes in out of home advertising today," he said.