Media Reviews for Media People: '20 Years of Tall Tales'
READ THIS NEXT
TV giants see glimmers of hope for the ad market

I bought a CD the other day. I went down to a store, grabbed it off the rack, screened it for signs of trauma and/or guest appearances by Dave Matthews, took it to the counter, paid for it with legal U.S. tender, and stuffed it in my backpack. Upon returning home, I unwrapped my purchase and put it into my stereo, then pressed play. I spent the next several moments bobbing my head rhythmically to the beat. 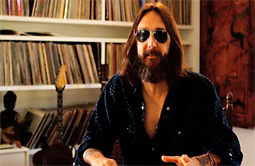 The Crowes' '20 Years of Tall Tales' is a daily series of interview clips featuring lead singer Chris Robinson addressing the group's antics-laden past.

This used to be an every-week experience for me, but in this day and age it was unique for what it wasn't: digital, spur-of-the-moment or based on a past affinity. In fact, it was directly influenced by online marketing. An ad on one of my favorite daily check-ins pierced my little self-involved cloud, which triggered a response along these lines: "Hey, I've heard good things about that band. I liked that one song of theirs. I had not been aware that they have a new record available for procurement. Perhaps I shall avail myself of the opportunity to buy it."

This got me to thinking. Amid a music-marketing climate in which word of mouth is the preeminent driver of sampling and purchases -- at least for so-far-out-of-the-cultural-loop-they-can't-even-see-the-loop folks like me -- is there anything performing artists and their marketing minions can do to awaken or reawaken fans to their craft? Yes, there are chats and webcasts and contests and gimmicks, but is there anything, like, different?

Attempting to answer this question, I arrived Monday morning at the Black Crowes' website (turn down your computer volume before clicking unless you and your fellow cubicle-farm denizens are in the mood for some moneymaker-shaking). To promote their new record, on which they do the "yoo hoo! we're still here! we have tickets and merchandise available for sale!" thing by revisiting their best-known songs, the Crowes have unveiled "20 Years of Tall Tales," a daily series of interview clips that, taken together, forge an oral history of the band. About as long as a radio song, the clips feature lead singer Chris Robinson addressing the group's antics-laden past -- feuds, financial follies and so on.

The clips are massively self-aggrandizing, of course, full of proclamations about the Crowes' artistic integrity (uncontainably enormous), self-sabotage (usually accidental), counterculture leanings (weedy) and trousers (stylish). At the same time, they achieve something that few music-marketing programs do: An easy intimacy.

Part of this has to do with the way they're filmed. Two cameras, one trained straight ahead and the other focusing on eyes or hands, capture Robinson as he floats from one topic to the next. The clips eschew the quick cuts, shaky pans and color/black-and-white juxtapositions that push most interview series into migraine/vertigo territory. But the series owes its kick to Robinson's considerable skills as a storyteller. Whether or not you like the Crowes' music -- for the record, I'm indifferent -- their story comes across as involving and funny, especially when Robinson drops the we-were-pure-man shtick and self-deprecates, like by cheekily describing other early-'90s bands as made "of less sturdy frontier stock." So yeah, there are many worse ways to kill a few minutes of the day than with "20 Years of Tall Tales."

What's surprising is that so few performers have attempted to sidle up to their fans in a similar manner. Granted, there aren't too many acts that can pull something like this off, whether owing to deficiencies in backstory or charisma, but I'm amazed by how few are trying. Out of curiosity, I checked out numerous new CD releases of the last four weeks, dotingly compiled by the great Burning Wood blog. What I found didn't inspire confidence.

Avenged Sevenfold, which sold a big pile of records over the last ten days, did little more than the expected social-media outreach. Squeeze, whose current album takes the same retread-old-terrain approach as the Crowes' disc, did even less, passing off a few warm critical notices as news. Sure, four weeks in the middle of the summer is an arbitrary period, and sure, the sample size isn't statistically significant. But damn, nobody's even trying (or perhaps has enough of a marketing budget to innovate).

If the people charged with marketing music haven't yet settled on a tactical approach for the digital-music era (other than to do everything within their power not to piss off Apple and Walmart), there's no telling what lies ahead. In fact, as I typed that last paragraph, the folks at TheBeatles.com sent out a dispatch that led off with this syntactically punishing first sentence: "The dazzling range of music originally issued by Apple Records between 1968 and 1973, which is now the subject of an unprecedented multi-album worldwide campaign starting October 25th -- including remastered CDs (with bonus material revealed for the first time below) and Apple's first digital downloads -- will now be augmented by two additional titles: 'Come and Get It: The Best Of Apple Records,' the first commercially issued multi-artist compilation in the label's history; and 'The Radha Krishna Temple,' the self-titled album of devotional music produced by George Harrison ."

Gaaa, right? If the shrewdest marketers in the history of popular music occasionally step in it, we shouldn't expect much from digital newbies. So appreciate "20 Years of Tall Tales" for what it is: A breezy series of postcards from a band that's still trying.