'Blind Side' vs. 'Up in the Air': and the Media Oscar Goes to ... | Ad Age
Skip to main content
Sign In Register

Optimedia's Antony Young Analyzes Strategies of Two Films Nominated for Best Picture
READ THIS NEXT
How Amazon Prime Video CMO Ukonwa Ojo is positioning the brand in the streaming wars
This Sunday, the film industry's good and great will adorn the red carpet with their Gucci gowns and Cartier jewelry for Hollywood's biggest night, as the 82nd Annual Academy Awards celebrate the best in the business. But who would win our Oscar for "Best Use of Media to Promote a Film"? We nominated "The Blind Side" from Alcon Entertainment and Warner Bros. and Paramount's "Up in the Air."

In addition to being award-worthy, both films were commercially successful at the box office. OK, we're not talking "Avatar" proportions, but "The Blind Side's" whopping $248.8 million exceeded everyone's expectations, while "Up in the Air," rated R, outdid itself with an impressive $82 million. For these two films, marketing played an important role in achieving this outcome.

Both were headlined by A-list talent (Sandra Bullock and George Clooney, respectively) and based on books, but this is where the similarities ended. "The Blind Side" was an emotional, family-friendly, true-life story with something for everyone, rated PG-13. Meanwhile, "Up in the Air" was an intelligent, humorous film but with a more narrow appeal among adults.

The studios adopted very different approaches to releasing and promoting these films. "Up in the Air" was a "platform" release, meaning it opened in select markets, in this case 15 theaters on Dec. 4 and expanding geographically over subsequent weeks (72 theaters in the second weekend, 175 theaters in the third), until its wide release on Dec. 23 going into the holiday weekend with 1,895 theaters. It held at 700 last week, 10 weeks after its wide release, which is significant for a specialty film. "The Blind Side" was always planned as a wide release, opening in over 3,100 theaters in its opening weekend of Nov. 20 and holding over 2,000 screens across weeks where blockbusters such as "Avatar" and "Sherlock Holmes" opened.

'The Blind Side' was an emotional, family-friendly, true life story with something for everyone, rated PG-13.
Both films presented some real challenges to market. "The Blind Side" potentially appealed to a lot of disparate groups that weren't regular filmgoers. For example, women over 35; football fans; and potentially Evangelicals -- a far cry from the typical teen, young-adult genre films that do well commercially. The studio targeted multiple niche audiences with ads cut to appeal to each group.

"Up in the Air" dealt with the very current issue of layoffs and the recession -- a potential turn-off for an audience looking for a couple of hours of reprieve from the realities of today's economy. Its marketers, therefore, focused on promoting George Clooney and director Jason Reitman's credentials -- he also directed "Juno" -- and positioned the film as a story about a business traveler and his human connections, summed up in the movie poster's tagline: "The story of a man ready to make a connection."

Up in the Air

"The Blind Side" ran a big, broad broadcast plan with a heavy network TV presence and 212 spots over the four weeks leading into its release, and a cable buy that spanned 44 networks. "Up in the Air" started with a cable-heavy plan five weeks out, adding in a comparatively modest level of network (about 60 spots) only two weeks before its wide release.

"Up in the Air's" network daypart mix was almost exclusively prime/late fringe. "The Blind Side" ran in most dayparts including morning, daytime and fringe to get to women, moms and probably an older audience.

As part of their strategy to target different target markets, marketers for "The Blind Side" placed ads across a diverse selection of shows: the season premiere of female-favorite "Grey's Anatomy"; football programming on CBS, FOX, NBC and ESPN to align with the film's story of Michael Oher, who was drafted into the Baltimore Ravens; and a schedule on BET in an effort to target the African-American audience. 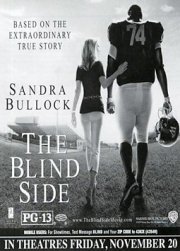 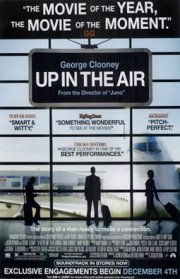 This ad for 'Up in the Air' ran in Time Out New York, December 3, 2009.
"Up in the Air" bought into the premium cable properties, cable news, Weather Channel, Travel and Style networks and the season finale of "Mad Men" to deliver on the mature, higher-end audience. The studio also ran 21% of its budget in spot TV supporting the regional roll-out and key local markets.

Both films ran the obligatory magazine placements in Time Out and Entertainment Weekly. "Up in the Air" placed a relatively heavy schedule in newspapers, just under 30% of its total media budget, compared to just 12% for newspapers in the media plan for "The Blind Side." This reflected its local rollout, but also a decision to reach a more well-traveled and metropolitan audience.

"The Blind Side" developed several impressive programs that helped drive word-of-mouth and laid a strong base for the film.

The film, featuring the Tuohy family, whose strong Evangelical Christian faith was evident in the storyline, reached out to church communities across the country. The studio hired a marketing specialist firm, which distributed advanced clips of the film to religious opinion makers. It set up a website where ministers could find sermon notes and spiritual study guides based on the movie. More than 20,000 pastors downloaded material from the site. Given the average church congregation in the U.S. reaches 400 people, we estimate that up to 8 million were reached in a very captive and compelling way.

There were also special screenings for football fans, sportcasters and sports opinion makers all around the country, including a number hosted by NCAA college football coaches. 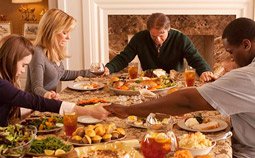 'The Blind Side' features a family with strong Evangelical Christian faith.
Through country singer Tim McGraw, who played Sean Tuohy, and his wife Faith Hill, the studio showed the movie at a red carpet event in Nashville, ran a special extra-long preview clip during the Country Music Awards and gave away tickets to the film through country music radio stations.

By comparison, "Up in the Air" received a lot of early buzz through a combination of film festivals and exclusive screenings. Releasing the film in a limited number of theaters early in some key markets such as New York and L.A. helped drive anticipation, as the film was billed as an awards contender. Its studio also did a number of online programs. I really liked the upintheairtweets.com page that live-streamed tweets about the film as well as Jason Reitman's tweets, which were a nice variation on the standard Twitter movie page. Oscar buzz has really helped to carry the interest of this film well into March. 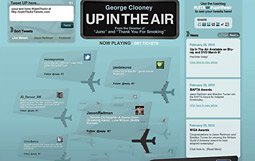 One promotion the marketers did in conjunction with marketing partner American Airlines was to fly 50 journalists and entertainment writers from New York on a specially chartered 767 flight to the press junket in LA. En route, they not only viewed the movie, but were also able to interview one of its stars, Anna Kendrick, and were treated to an in-flight live concert by Sad Brad Smith, who recorded a number of the film's tracks. Writers were able to blog the experience via in-flight Wi-Fi access.

The website for "The Blind Side" contained a good variety of trailers, video, film information, photos and downloads. The home page for "Up in the Air" to me was a little more stylized, with eye-catching pictures, pop-ups and videos. It included some DVD extra-like bits such as a Jason Reitman featurette, a Sad Brad Smith music video and a clip from the film all shareable on Facebook, Twitter or e-mail. I enjoyed the separate page Ryan's Rules, which includes George Clooney's character Ryan Bigham's Ten Travel Tips and encouraged visitors to tweet their own additional rules.

The 'Up in the Air' website
Both films had a presence on YouTube and Facebook, and "The Blind Side" had an impressive following on Facebook with just over 224,000 fans -- which bodes well for its DVD release.

Both films also ran banner ads that featured trailers and video content. "The Blind Side" ran these on mainstream sites such as Yahoo, AOL, Good Housekeeping and iVillage. "Up in the Air" skewed towards entertainment sites such as EW.com, ESPN, Oprah and Yahoo, plus a number of newspaper websites promoting tickets and showtimes.

"Up in the Air" earned some additional media help from its marketing partners -- American Airlines, Hilton Hotels and TravelPro. American Airlines showed trailers on-board, and in their sports arenas in Dallas and Miami. It also featured the film on the cover of its in-flight magazine and screened deleted scenes on its website. Additionally, American Airlines promoted an "Up in the Air" sweepstakes in its 60 million-strong AAdvantage membership via direct mail and e-mail. Hilton also ran a sweepstakes and advertised the movie on the back of more than a million hotel pass keys.

And the envelope please...

"Up in the Air" ran a smart and well-executed campaign that was very focused in its TV strategy, and drove the film with good buzz and local marketing in a limited release. It also leveraged its marketing partners expertly. This allowed the marketers behind the film to drive strong attendances throughout the holiday season and well into the award season.

But my vote for the winner would have to go to "The Blind Side." Its strategy of promoting the film to diverse communities with specific messaging and media -- including some creative word-of-mouth programs -- really paid off for them. In doing so, the marketers behind "The Blind Side" fully maximized the audience potential for this film. In the first weekend, 65% of the attendees were women 35 and over, and cities like Dallas, Birmingham and Nashville had some of the biggest attendances. The impact of this campaign saw the unusual event of attendances actually increasing in the second week.

All in all, these were two very different films that executed superb strategies based on their respective audience and appeal. Let's see if either can snag an Oscar this week.